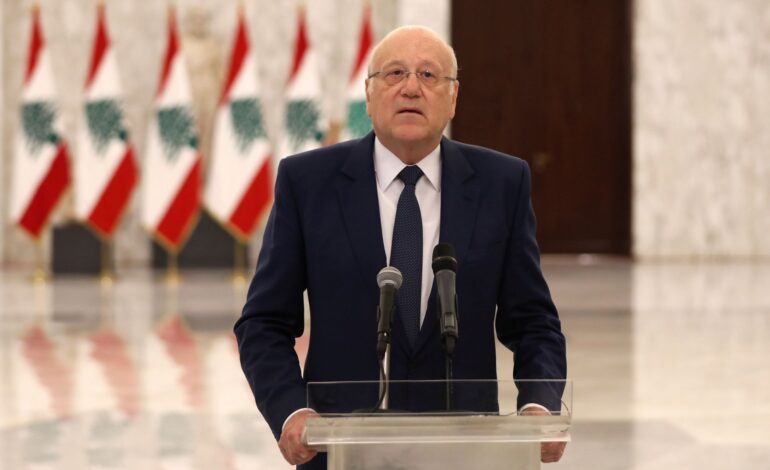 Mikati, who has been prime minister twice before and unlike many Lebanese leaders does not hail from a political bloc or dynasty, received 72 votes out of a total of 118 members of parliament.

Like the previous nominee, Saad al-Hariri, he now faces major challenges in navigating Lebanon’s sectarian, power-sharing structure to secure agreement on a cabinet equipped to address the country’s financial meltdown.

While Lebanon has been run by a caretaker administration for nearly a year, since a huge blast devastated large parts of Beirut, its currency has collapsed, jobs have vanished and banks have frozen accounts. The economic freefall is Lebanon’s worst crisis since the 1975-90 civil war.

Mikati’s endorsers included Hariri, who abandoned his effort to form a new government last week after nearly 10 months of failing to agree its composition with President Michel Aoun.

Lebanon’s influential parliament speaker Nabih Berri said on Thursday the legislature was ready to lift the immunity of its members in order allow for questioning over the port blast. Berri did not say when immunity would be lifted or how.

Hezbollah, the heavily armed Shi’a Islamist movement that the U.S. deems a terrorist group, nominated Mikati in Monday’s consultations and most of the main parliamentary blocs endorsed the choice.

Mikati’s endorsers included Hariri, who abandoned his effort to form a new government last week after nearly 10 months of failing to agree its composition with President Michel Aoun.

Hariri told reporters after meeting Aoun that he hoped Mikati, a telecoms tycoon, would be chosen and succeed in forming a cabinet.

“The country has a chance today,” he said.

Mikati said on Wednesday that he hoped to form a government soon.

The news of Mikati’s likely designation boosted the Lebanese pound on the unofficial parallel market earlier on Monday, where dollars changed hands at around 16,500 pounds, compared to more than 22,000 at the height of the deadlock over the government.

In Lebanon’s political system, the post of prime minister has to be held by a Sunni Muslim, while the presidency is held by a Maronite Christian.

Western governments have been piling pressure on Lebanon, one of the most heavily indebted states in the world, to form a government that can set about structural reforms. They have threatened to impose sanctions and said financial support will not flow before reforms begin.

Mikati said on Wednesday that he hoped to form a government soon.