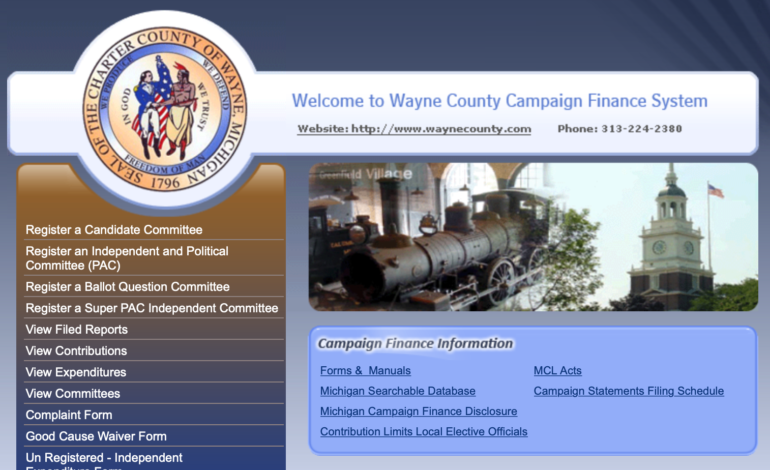 The Wayne County campaign finance page can be used to search by contribution, expenditure and committee.

Dearborn residents have a packed field of candidates to choose from for the upcoming mayoral and City Council primary races.

By voting for a candidate, residents entrust them to have the capacity and experience to handle complex paperwork, have a comprehension of city budgets and do research into and follow the local laws that govern their actions in City Hall. Those actions will undoubtedly affect the quality of life of the people who vote for them, going forward.

Much has been said recently about the amount of money candidates have “raised” or spent in the primary. This conversation comes about after the posting of campaign finance reports each candidate had to submit in order to maintain an accurate account of campaign activities. Those filings can also assure voters that candidates really are willing to serve the public in dedicated, transparent and lawful ways.

Equal attention should be paid to whether those campaign filings make sense, are balanced out, show attention to detail (no matter how small) and a willingness to follow governmental guidelines.

An analysis of those filings, which reflect campaign activity through mid-July, can provide such a picture of candidates in Dearborn’s upcoming race.

A further look into these campaign finance reports provide some interesting observations.

“Previous balance” represents funds the candidate had from before this reporting period. Typically, current office holders have previous balances because of earlier fund raising.

Candidate Kalette Willis filed a reporting waiver signifying that she does not expect to raise or spend more than $1,000, which exempted her from filing a pre-primary campaign statement. Council candidate Ziad Adbulmalik did not file pre-primary reports by the July 23 deadline, despite not having a waiver in place. Council candidates Houda Berry and Gary Enos filed pre-primary reports after the July 23 deadline and were assessed late filing fees by Wayne County.

“Contribution to self” represents the amount of money contributed by a candidate to his/her own campaign, whether it is a direct contribution or a loan to the committee. The column listing “Debt owed” represents the amount of money the committee owes, including money owed to the candidate, if applicable. For example, Hussein Berry loaned $90,000 to his campaign and Thomas Tafelski loaned $5,000 to his campaign. Both these amounts are reflected as debt owed by the committee.

A “Committee to Improve Dearborn” contributed $7,000 to Thomas Tafelski’s campaign, representing about 24 percent of his total contributions. It also contributed $500 each to Silvio Davis, Gary Enos and Ken Paris. Interestingly, this committee is not registered with the state, county or the Federal Election Commission. According to the law, as soon as a “person” or group receives or spends $500 or more in a calendar year, the Michigan Campaign Finance Act requires the “person” or group to form and register a committee.

Khodr Farhat listed $12,990 in contributions and only $405 in expenditures despite having sent out fliers, which typically costs much more than a few hundred dollars between printing, processing and mailing costs. Interestingly, his ending cash balance $13,071 is higher than his total contributions.

Dearborn residents have some important choices to make in the Aug 3. primary. After recent devastating flooding, many are left to wonder whether those choices will yield leadership that truly believes in accountability and transparency from the get-go. Choose wisely.