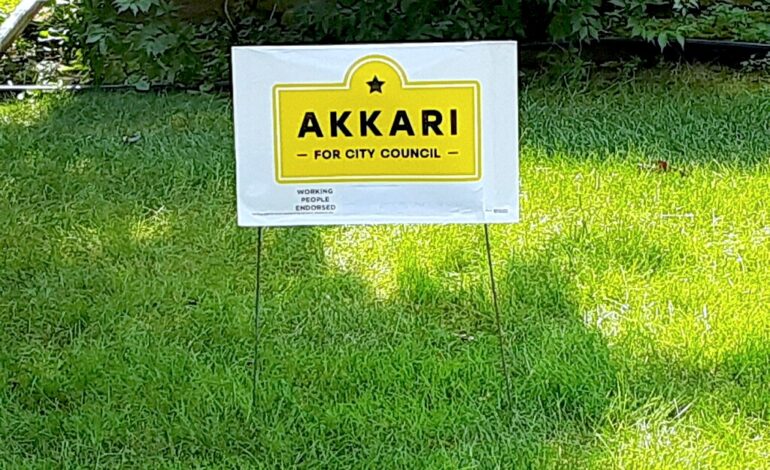 That endorsement was pulled four days before Tuesday’s election. The organization told Akkari it reviewed his website, which has been up for months, and found his stance on the police and fire budget to be in opposition to their values. Akkari had explained that stance in great detail to the UAW throughout the endorsement process.

In May, Akkari went through an endorsement process, entailing the submission of background information, a detailed questionnaire and an interview where Akkari explained to a rank-and-file committee his platform. One of the points of that platform is the immense cost of fire and police services, which exceeds all revenue raised by the city’s operating millage.

Akkari has proposed a data and demand-based staffing method, as opposed to the current “inflexible, rigid” minimum staffing requirement in the city’s Charter. The city has slashed city services over the years to make up for its public safety costs, while voters had to approve a soon-to-expire operating millage rate increase to maintain some of those services. Many in Dearborn, including candidates, oppose scrutinizing the public safety budget. No other candidate besides Akkari has addressed the minimum staffing requirement directly, even though Dearborn is unique in the state as having one.

Both Republican and Democratic officials have cautioned against such a provision due to its toll on local budgets. Former Governor Snyder outlawed minimum staffing in 2011, but Dearborn’s Charter provisions have been grandfathered in.

Akkari’s campaign website, up since April, details this issue, as did the questionnaire he submitted to the UAW endorsement committee.

“In the last 10 years annual spending on police and fire has increased at four times the rate of revenue growth,” Akkari said in the questionnaire.

He received an endorsement letter on June 3, signed by Director Chuck Browning, that the CAP Council had decided to endorse his candidacy for Dearborn City Council.

But on July 30, just days before Tuesday’s election, Akkari received a call and a letter from the organization informing him that it was pulling its endorsement. The letter said the local attorney did not represent UAW’s “interest and shared values” for its labor members and retirees.

I don’t buy this half-baked explanation that they checked my website and found something that I had explained orally and in writing months ago to the committee. — Jon Akkari

That letter, signed by Assistant Director Laura Dickerson, also asked Akkari to “refrain from using the UAW Region 1A logo effective immediately.” Akkari has had campaign materials containing endorsements distributed for weeks, as have other candidates in the city.

“(Back in May) I thoroughly and candidly explained my position on the minimum staffing issue,” Akkari told The Arab American News. “Several weeks later, to my surprise, since I’m a first-time candidate with no political connections or prior organizing experience, I was endorsed by UAW Region 1A, which I was very proud of.”

As part of the endorsement process, candidates speak before UAW members to explain their policy positions and answer questions. Those members then make recommendations to the regional director about which candidates they believe deserve an endorsement.

On Friday, four days from the primary elections, Akkari received the call informing him UAW Region 1A was pulling its endorsement.

“When I asked why, what was told to me over the phone was that they had reviewed my website, which had been up for months, that I had some stances on police and fire that they did not agree with,” Akkari said.

Akkari said he finds their “un-endorsement” confounding since, regardless of whether the organization had access to the website, which has been up since April, Akkari very thoroughly explained throughout the endorsement process and in his candidate questionnaire the history of minimum staffing, how it’s caused a decline in city services and an increase in property taxes, and how he was opposed to it.

“I told them very clearly, in both the questionnaire and my interview, how I wanted to switch to data or demand-based staffing,” Akkari said. “This topic, what I call comprehensive public safety, is also the first thing in my campaign literature, which I circulated to committee members for review at the endorsement interview.”

“I don’t buy this half-baked explanation that they checked my website and found something that I had explained orally and in writing months ago to the committee,” Akkari said. “I can’t say that I know, but I very strongly suspect that someone or some entity with clout or influence with UAW pressured them into withdrawing their endorsement four days before the election.”

Akkari said he’s had to knock on doors since the call to go and physically cover the UAW logo on his lawn signs at supporters’ homes. But residents have told him they support his platform, with or without the endorsement.

Akkari’s stance on minimum staffing and its effects on the local budget is not a novel one and has been echoed by local leaders in the past.

Back in 2011, Dearborn’s Mayor O’Reilly cautioned against the minimum staffing requirement because of its effects on the budget and city services.

“From an administrative standpoint, it really cuts down your options when you have so much of the budget already accounted for before you even sit down at the table,” O’Reilly said back then.

This decision by the UAW Region 1A administration is disappointing and disheartening, and not respectful of the original recommendation made by the committee of members to endorse my campaign.

Snyder signed a bill prohibiting minimum staffing in city charters and ordinances the same year, arguing that local governments were often unable to afford such provisions, which forced them to violate their own charters.

Snyder’s prohibition only affects local governments that want to add the requirement to their charter after the legislation passed in late 2011. Dearborn passed its requirements through ballot initiatives in 2001 and 2004.

“Eliminating these rigid requirements will give locally elected officials greater flexibility to determine how to allocate resources to best meet a community’s needs,” Snyder said in 2011.

“This decision by the UAW Region 1A administration is disappointing and disheartening, and not respectful of the original recommendation made by the committee of members to endorse my campaign,” Akkari said.

The UAW Region 1A office was not available for comment at press time.