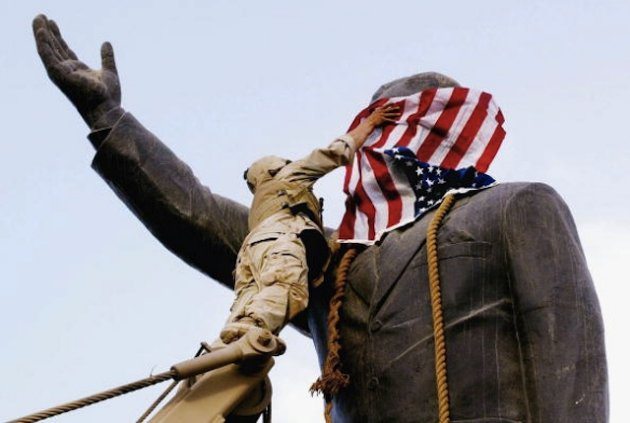 American Marines help pull down a statue of Saddam Hussein in the center of Baghdad, April 9, 2003. Photo: Mirrorpix/Getty Images

Jonah Goldberg and Michael Ledeen have much in common. They are both writers and also cheerleaders for military interventions and, often, for frivolous wars. Writing in the conservative rag, The National Review, months before the U.S. invasion of Iraq in 2003, Goldberg paraphrased a statement which he attributed to Ledeen with reference to the interventionist U.S. foreign policy.

“Every 10 years or so, the United States needs to pick up some small crappy little country and throw it against the wall, just to show the world we mean business,” Goldberg wrote, quoting Ledeen.

Those like Ledeen, the neoconservative intellectual henchman type, often get away with this kind of provocative rhetoric for various reasons. American intelligentsias, especially those who are close to the center of power in Washington DC, perceive war and military intervention as the foundation and baseline of their foreign policy analysis. The utterances of such statements are usually conveyed within friendly media and intellectual platforms, where equally hawkish, belligerent audiences cheer and laugh at the war-mongering muses. In the case of Ledeen, the receptive audience was the hardline, neoconservative, pro-Israel American Enterprise Institute (AEI).

Predictably, AEI was one of the loudest voices urging for a war and invasion of Iraq prior to that calamitous decision by the George W. Bush administration, which was enacted in March 2003.

Neoconservatism, unlike what the etymology of the name may suggest, was not necessarily confined to conservative political circles. Think tanks, newspapers and media networks that purport — or are perceived — to express liberal and even progressive thought today, like The New York Times, The Washington Post and CNN, have dedicated much time and space to promoting an American invasion of Iraq as the first step of a complete U.S. geostrategic military hegemony in the Middle East. Even those who genuinely supported the war based on concocted intelligence — that Iraqi President Saddam Hussein possessed weapons of mass destruction or the equally fallacious notion that Saddam and Al-Qaeda cooperated in any way — must, by now, realize that the entire American discourse prior to the war had no basis in reality.

Like the National Review, these media networks also provided unhindered space to so-called neoconservative intellectuals who molded American foreign policy based on some strange mix between their twisted take on ethics and morality and the need for the U.S. to ensure its global dominance throughout the 21st century. Of course, the neocons’ love affair with Israel has served as the common denominator among all individuals affiliated with this intellectual cult.

The main — and inconsequential — difference between Ledeen, for example, and those like Thomas Friedman of The New York Times is that the former is brazen and blunt, while the latter is delusional and manipulative. For his part, Friedman also supported the Iraq war, but only to bring “democracy” to the Middle East and to fight “terrorism.” The pretense “war on terror”, though misleading if not outright fabricated, was the overriding American motto in its invasion of Iraq and, earlier, Afghanistan. This mantra was readily utilized whenever Washington needed to “pick up some small crappy little country and throw it against the wall.”

Even those who genuinely supported the war based on concocted intelligence — that Iraqi President Saddam Hussein possessed weapons of mass destruction or the equally fallacious notion that Saddam and Al-Qaeda cooperated in any way — must, by now, realize that the entire American discourse prior to the war had no basis in reality. Unfortunately, war enthusiasts are not a rational bunch. Therefore, neither they nor their “intellectuals” should be expected to possess the moral integrity in shouldering the responsibility for the Iraq invasion and its horrific consequences.

If, indeed, the U.S. wars in the Middle East and Afghanistan were meant to fight and uproot terror, how is it possible that, in June 2014, an erstwhile unknown group calling itself the “Islamic State” (IS), managed to flourish, occupy and usurp massive swathes of Iraqi and Syrian territories and resource under the watchful eye of the U.S. military? If the other war objective was bringing stability and democracy to the Middle East, why did many years of U.S. “state-building” efforts in Iraq and Afghanistan, for example, leave behind nothing but weak, shattered armies and festering corruption?

Two important events have summoned up these thoughts: President Biden’s “historic” trip to Cornwall, U.K., in June, to attend the 47th G7 summit and, two weeks later, the death of Donald Rumsfeld, who is widely depicted as “the architect of the Iraq war.” The tone struck by Biden throughout his G7 meetings is that “America is back”, another American coinage similar to the earlier phrase, the “great reset” — meaning that Washington is ready to reclaim its global role that had been betrayed by the chaotic policies of former President Trump.

The newest phrase — “America is back” — appears to suggest that the decision to restore the U.S.’ uncontested global leadership is, more or less, an exclusively American decision. Moreover, the term is not entirely new. In his first speech to a global audience at the Munich Security Conference on February 19, Biden repeated the phrase several times with obvious emphasis.

President Biden during his inauguration at the U.S. Capitol, Jan. 20. Photo: AP

Biden’s actual mission is to merely whitewash and restore his country’s tarnished reputation, marred not only by Trump, but also by years of fruitless wars, a crisis of democracy at home and abroad and an impending financial crisis resulting from the U.S.’ mishandling of the COVID-19 pandemic.

“America is back. I speak today as president of the United States at the very start of my administration and I am sending a clear message to the world: America is back,” Biden said, adding that, “the transatlantic alliance is back and we are not looking backward, we are looking forward together.”

Platitudes and wishful thinking aside, the U.S. cannot possibly return to a previous geopolitical standing, simply because Biden has made an executive decision to “reset” his country’s traditional relationships with Europe — or anywhere else, either.  Biden’s actual mission is to merely whitewash and restore his country’s tarnished reputation, marred not only by Trump, but also by years of fruitless wars, a crisis of democracy at home and abroad and an impending financial crisis resulting from the U.S.’ mishandling of the COVID-19 pandemic. Unfortunately for Washington, while it hopes to “look forward” to the future, other countries have already staked claims to parts of the world where the U.S. has been forced to retreat, following two decades of a rudderless strategy that is fueled by the belief that firepower alone is sufficient to keep America aloft forever.

Though Biden was received warmly by his European hosts, Europe is likely to proceed cautiously. The continent’s geostrategic interests do not fall entirely in the American camp, as was once the case. Other new factors and power players have emerged in recent years. China is now the European bloc’s largest trade partner and Biden’s scare tactics warning of Chinese global dominance have not, seemingly, impressed the Europeans as the Americans had hoped. Following Britain’s unceremonious exit from the EU bloc, the latter urgently needs to keep its share of the global economy as large as possible. The limping U.S. economy will hardly make the substantial deficit felt in Europe. Namely, the China-EU relationship is here to stay — and grow.

There is something else that makes the Europeans wary of whatever murky political doctrine Biden is promoting: dangerous American military adventurism.

The U.S. and Europe are the foundation of the North Atlantic Treaty Organization (NATO), which, since its inception in 1949, was almost exclusively used by the U.S. to assert its global dominance, first in the Korean Peninsula in 1950, then everywhere else.

Following the September 11 attacks, Washington used its hegemony over NATO to invoke Article 5 of its Charter, that of collective defense. The consequences were dire, as NATO members, along with the U.S., were embroiled in their longest wars ever, military conflicts that had no consistent strategy, let alone measurable goals. Now, as the U.S. licks its wounds as it leaves Afghanistan, NATO members, too, are leaving the devastated country without a single achievement worth celebrating. Similar scenarios are transpiring in Iraq and Syria, too.

Rumsfeld’s death on June 29, at the age of 88, should serve as a wake-up call to American allies if they truly wish to avoid the pitfalls and recklessness of the past. While much of the U.S. corporate media commemorated the death of a brutish war criminal with amiable non-committal language, some blamed him almost entirely for the Iraq fiasco. It is as if a single man had bent the will of the West-dominated international community to invade, pillage, torture and destroy entire countries. If so, then Rumsfeld’s death should usher in an exciting new dawn of collective peace, prosperity and security. This is not the case.

Shackled with a legacy of unnecessary, fruitless and immoral wars, yet with no actual “forward” strategy, the U.S., arguably for the first time since the inception of NATO in the aftermath of World War II, has no decipherable foreign policy doctrine.

Rationalizing his decision to leave Afghanistan in a speech to the nation in April, Biden did not accept, on behalf of his country, responsibility over that horrific war. Instead, he spoke of the need to fight the “terror threat” in “many places”, instead of keeping “thousands of troops grounded and concentrated in just one country.”

Indeed, a close reading of Biden’s decision to withdraw from Afghanistan — a process which began under Trump — suggests that the difference between U.S. foreign policy under Biden is only tactically different from the policies of George W. Bush when he launched his “preemptive wars” under the command of Rumsfeld. Namely, though the geopolitical map may have shifted, the U.S. appetite for war remains insatiable.

Shackled with a legacy of unnecessary, fruitless and immoral wars, yet with no actual “forward” strategy, the U.S., arguably for the first time since the inception of NATO in the aftermath of World War II, has no decipherable foreign policy doctrine. Even if such a doctrine exists, it can only be materialized through alliances whose relationships are constructed on trust and confidence. Despite the EU’s courteous reception of Biden in Cornwall, trust in Washington is at an all-time low.

Even if it is accepted, without any argument, that America is, indeed, back, considering the vastly changing geopolitical spheres in Europe, the Middle East and Asia, Biden’s assertion should, ultimately, make no difference.