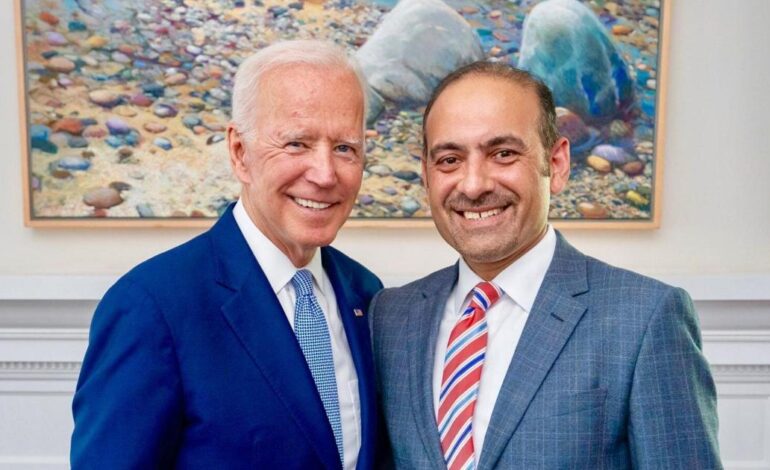 WASHINGTON, D.C. — National civil rights groups have condemned the recent actions of a group of Republican senators who are “concerned” by a Biden administration Muslim nominee over his membership in an organization they say has demonstrated “anti-Israel” prejudice.

On Wednesday, the Leadership Conference on Civil and Human Rights, Bend the Arc: Jewish Action and prominent civil rights, Jewish and faith-based organizations and leaders denounced “flagrant anti-Muslim” attacks against Dilawar Syed and his nomination for deputy administrator of the U.S. Small Business Administration (SBA).

If confirmed, Syed, a Pakistani American entrepreneur, would become the highest-ranking Muslim American in the Biden administration to date.

In a letter to the Senate Small Business and Entrepreneurship Committee (SBC), the organizations and leaders called on the committee to take swift action and vote on Syed’s nomination.

Republicans’ objection to Syed’s nomination stems from his work as a board member of Emgage, a Muslim advocacy organization that promotes civic engagement in the Muslim community and, through an affiliated organization, endorses candidates and issues relevant to it.

The Republicans referred to the recent condemnation by Emgage of Israel’s latest assault on the Gaza Strip, which killed hundreds of Palestinians and displaced scores.

Syed’s nomination was originally favorably voted out of committee by voice vote on June 16, with Republican support, the civil rights groups said in its own letter to the committee. But the Republican senators pulled their support in a rare move, vaguely raising a “technicality.”

The GOP senators later wrote a letter to SBC Chairman Ben Cardin (D-MD) objecting to Syed’s confirmation over his involvement with Emgage, a group they called “vocally anti-Israel.”

The Republicans referred to the condemnation by Emgage of Israel’s latest assault on the Gaza Strip, which killed hundreds of Palestinians and displaced scores. The Israeli government has been accused by the Human Rights Watch (HRW) of practicing apartheid on Palestinians and most recently committing war crimes in already-besieged Gaza.

“The organization amplified accusations that Israel is an apartheid state and issues a statement of support after a House member (Ilhan Omar) inexcusably equated Israel and the United States to Hamas and Taliban terrorist organizations, something that earned the rebuke of the Democratic Speaker of the House,” the Republican senators wrote.

The Republicans said Syed’s involvement with the organization necessitates an additional hearing to ensure that his confirmation does not jeopardize small businesses with close ties to Israeli companies or small businesses owned by Jewish Americans.

But the Jewish civil rights groups in their letter to the Senate committee said that Republicans actually pulled back their support after the circulation of an internal strategy email by SBC Republican Senate staff “weaponizing” Syed’s religion and place of birth against him.

The groups said the email “contained not a single substantive statement, action or even political position taken by Mr. Syed on policy or business matters.”

The American Jewish Congress rebuked the GOP’s accusation, stating that it “rejects the charge that simply an affiliation with Emgage would reflect negatively on an individual, organization or agency.”

The SBC Republicans then issued a press release and then later the letter to Cardin, raising their objections to the confirmation. Since then, Cardin set up two meetings to vote on Syed’s nomination, but SBC Republicans refused to show up for the vote both times.

The American Jewish Congress rebuked the GOP’s accusation, stating that it “rejects the charge that simply an affiliation with Emgage would reflect negatively on an individual, organization or agency.”

Syed, an immigrant, is an Ivy League-educated and experienced entrepreneur and business executive who has a background in the tech sector and has also held public positions on the federal, state and local levels.

Syed was a White House Asian American and Pacific Islander commissioner after 2008’s Great Recession. The civil rights groups say he had been driving COVID-19 recovery efforts in the rural heartland, including throughout underserved communities in California.

President Biden announced Syed’s nomination to the SBA back in March.