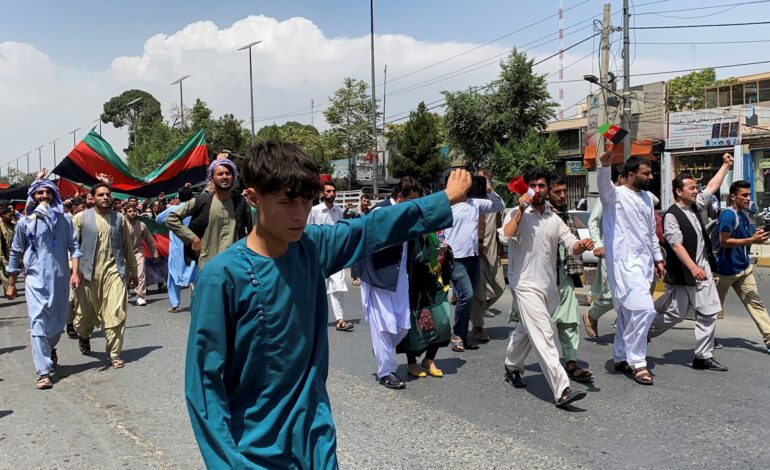 People carry the national flag at a protest held during the Afghan Independence Day in Kabul, Afghanistan August 19. Photo: Reuters/Stringer

The Taliban called on Afghanistan’s imams to urge unity when they hold their first Friday prayers since the Islamist group seized control of the country, as protests against the takeover spread to more cities on Thursday, including the capital Kabul.

Several people were killed when Taliban militants fired on a crowd in the eastern city of Asadabad, a witness told Reuters. Another witness reported gunshots near a rally in Kabul, but they appeared to be Taliban firing into the air.

On the day Afghanistan celebrates its independence from British control in 1919, a social media video showed a crowd of men and women in Kabul waving black, red and green national flags.

“Our flag, our identity,” they shouted.

At some protests elsewhere, media reported people tearing down the white flag of the Taliban. A Taliban spokesman was not immediately available for comment.

Some demonstrations were small, but combined with the desperate scramble of thousands of people seeking to flee the country they underline the challenge the Taliban face in governing.

The group had conquered Afghanistan at lightning speed as foreign troops withdrew, surprising even their own leaders and leaving power vacuums to fill in many places. People carry the national flag at a protest held during the Afghan Independence Day in Kabul, Afghanistan August 19. Photo: Reuters/Stringer

The Taliban urged unity ahead of Friday prayers and they called on all imams to persuade people not to leave the country. Since seizing Kabul on Sunday, the Taliban has presented a more moderate face, saying they want peace, will not take revenge against old enemies and will respect the rights of women within the framework of Islamic law.

When in power from 1996-2001, they severely restricted women’s rights, staged public executions and blew up ancient Buddhist statues.

It was unclear if the casualties in Asadabad resulted from the Taliban firing or from a stampede.

“Hundreds of people came out on the streets,” witness Mohammed Salim said. “At first I was scared and didn’t want to go, but when I saw one of my neighbors joined in I took out the flag I have at home.

Several people were killed and injured in the stampede and firing by the Taliban.

Protests flared in the city of Jalalabad in Paktia province, also in the east. On Wednesday, Taliban fighters fired at protesters waving flags in Jalalabad, killing three, witnesses and media reported.

First Vice President Amrullah Saleh, who is trying to rally opposition to the Taliban, said on Twitter. “Salute those who carry the national flag and thus stand for dignity of the nation.”

Saleh said on Tuesday he was the “legitimate caretaker president” in Afghanistan after President Ashraf Ghani fled.

Ahmad Massoud, leader of the National Resistance Front of Afghanistan and the son of Ahmad Shah Massoud, a veteran guerrilla leader killed by suspected al Qaeda militants in 2001, called for Western support to fight the Taliban.

“I write from the Panjshir Valley today, ready to follow in my father’s footsteps, with mujahideen fighters who are prepared to once again take on the Taliban,” Massoud wrote in an op-ed for the Washington Post.

Qatar could host fresh talks between the Taliban and the Afghan government as soon as next week to reach an agreement over power sharing and government transition, said two sources familiar with the process and two foreign diplomats. Do they want to be recognized by the international community as being a legitimate government? I’m not sure they do — President Biden on the Taliban

G7 foreign ministers called for a united international response to prevent the crisis escalating further, in comments echoed by countries including Russia. China said the world should support, not pressure, Afghanistan.

President Biden said the Taliban must decide if they want international recognition.

“Do they want to be recognized by the international community as being a legitimate government? I’m not sure they do,” Biden said in TV interview.

At the border with Pakistan, traders and officials said commercial traffic was starting to return to normal.

Kabul has been largely calm, but 12 people have been killed in and around the airport, a NATO and a Taliban official said.

A Taliban official said they could not be blamed for the chaos at the airport. In one scene captured on social media a small girl was hoisted over the airport’s perimeter wall and handed to a U.S. soldier.

A small Afghan girl was lifted up over the high perimeter wall and passed into the hands of an American soldier at Kabul airport, capturing the sense of desperation among many Afghans who are fleeing because of fear of persecution https://t.co/W2JUbGP0bq pic.twitter.com/yD6ixI3i2n

The Taliban were “keeping their word” by providing foreign powers with support in evacuations, another Taliban official told Reuters. “We are facilitating safe exit passage not just for foreigners but also to Afghans.”

Afghanistan’s Ariana News reported that an Afghan national team footballer died in a fall from a U.S. plane at Kabul airport on Monday, when crowds of people were seen trying to board a moving aircraft.

U.S. fighter jets are flying over the city to ensure security for the evacuation operation, the Pentagon said.

Under a pact negotiated by former President Trump’s administration, the U.S. agreed to withdraw its forces in exchange for a Taliban guarantee not to attack departing foreign forces or let Afghanistan be used for terrorist attacks.

Biden said U.S. forces would remain until all Americans were evacuated, even if that meant staying past an Aug. 31 U.S. deadline for withdrawal.