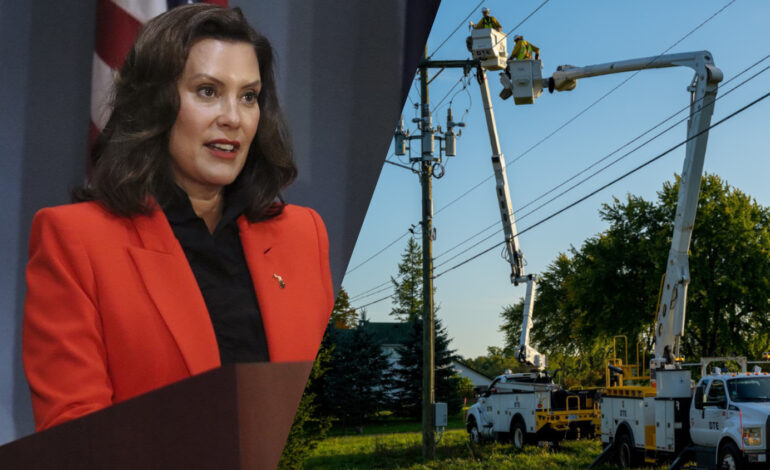 Photos: Office of the Governor/DTE

LANSING – Governor Whitmer is calling on utilities companies to automatically credit Michiganders who experienced recent widespread outages and increase the amount paid out to them towards compensations.

DTE Energy drew outrage from customers who lost power for days after last week’s storm by offering a tiny credit to their next bills, worth $25, to those those that were without power for more than 120 hours “under catastrophic conditions,” or more than 16 hours under “non-catastrophic conditions,” or if they had eight or more outages within 12 months.

After the growing criticism, DTE announced on Thursday that it had “voluntarily issued” $100 credits a one-time courtesy to customers who still remained out of power on Monday morning.

More than 750,000 Michiganders lost power over the last few weeks, with some outages lasting up to a week on some of the hottest days of the year.

Tens of thousands of customer on the west side of Dearborn, and neighboring communities like Dearborn Heights and Melvindale were without power for days over last weekend. DTE said that in its coverage area, about 550,000 customers were out of power at the hight of outages. As of 10 p.m. last Sunday, there were still about 44,000 customer without power, according to WXYZ.

“Outages like these lead to fridges full of spoiled food, interfere with life-saving medical equipment, disrupt the workday, and exacerbate the dangers of unmitigated hot weather,” said Whitmer. “We need tangible, immediate action from Michigan’s three largest utility companies to ensure the production and delivery of affordable, reliable energy to every family, community, and small business.”

On Monday, Michigan Attorney General Dana Nessel also called on the state’s two power companies to voluntarily credit customers affected by the outages and to provide greater credits to assist customers who have lost hundreds of dollars or more in food and alternative housing costs.

Whitmer asked fo immediate action to reduce disruptions to power by increasing tree trimming and other grid-hardening practices. These extra investments should be financed by the company, rather than customers, she said. The governor said it’s the energy companies responsibility to ensure the state’s electric grid is up to the task so families, communities, and small businesses across Michigan can keep the lights on.

Whitmer also encourages the Michigan Public Service Commission to prevent utilities from recovering outage-related costs from customers, require utilities to develop more extensive emergency preparedness plans, and speed up the adoption of rules that will increase grid security and reliability.