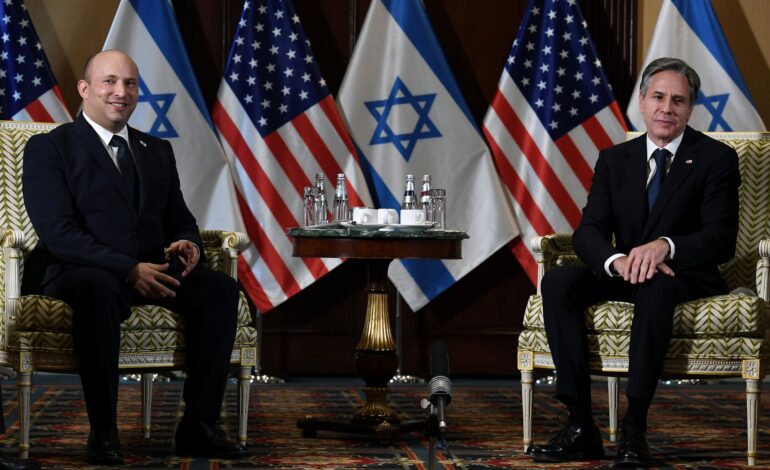 WASHINGTON, D.C. — Overshadowed by events in Afghanistan, the first White House meeting between President Biden and Israeli Prime Minister Naftali Bennett was postponed until Friday. The Israeli leader is expected to push Biden to harden his approach to Iran, with few prospects their talks will lead to renewed movement on peace talks in the Palestine-Israel region.

Both Israel and the U.S. have expressed hope the meeting will set a positive tone between Biden and Bennett, a high-tech millionaire and West Bank settlement leader, who ended Benjamin Netanyahu’s 12-year run as prime minister in June. Bennett has openly expressed flagrantly anti-Arab sentiments in the past.

The meeting is set to be in contrast to mild tensions over settlement building between the conservative Netanyahu, who was close to former President Trump, and the last Democratic administration led by Barack Obama, with Biden as his vice president.

“There’s a new administration in the U.S and a new government in Israel and I’m bringing a new spirit of cooperation with me from Jerusalem,” Bennett said on departure for Washington from Tel Aviv’s Ben Gurion airport on Tuesday.

The visit gives the U.S. administration an opportunity to demonstrate business as usual with its closest Middle East ally while it contends with the chaotic situation in Afghanistan, Biden’s biggest foreign policy crisis since taking office.

But Israel faces concern from Washington over housing construction in Jewish settlements in the occupied West Bank, on land Palestinians seek for a state. U.S.-Israeli friction over the issue was absent while Trump was in office.

Bennett is less dramatic, but publicly just as adamant as Netanyahu in pledging not to allow Iran, which Israel views as an existential threat, to build a nuclear weapon, telling a cabinet meeting on Sunday the situation was at a critical point.

Bennett said he would tell Biden, “This is the time to stop the Iranians, not to give them a lifeline in the form of re-entering an expired nuclear deal.”

A U.S. official said Bennett’s expected entreaties for the Biden administration to drop its efforts to revive the agreement are not likely to bear fruit.

To Israeli acclaim, Trump in 2018 withdrew the U.S. from the 2015 deal between six world powers and Iran. He deemed it too advantageous for Tehran and reimposed U.S. sanctions.

In a report seen last week by Reuters, the International Atomic Energy Agency said Iran had accelerated uranium enrichment to near weapons-grade.

Iran has consistently denied seeking a bomb, but the enrichment raised tensions with the West as both sides seek to resume talks on reviving their deal to curb Tehran’s nuclear activities in return for the lifting of sanctions.

With consensus on Palestinian statehood virtually impossible within the Israeli government, Biden and his aides are not expected to press Bennett for any major concessions towards the Palestinians in his first foreign visit.

Bennett told his cabinet he would present Biden with “an orderly plan that we have formulated in the past two months to curb the Iranians, both in the nuclear sphere and vis-à-vis regional aggression.” He gave no further details.

At the airport in Tel Aviv, Bennett told reporters he would share with Biden the findings that Israel has gleaned from its extensive COVID-19 vaccine booster drive aimed at taming the Delta variant.

Bennett, 49, is the son of American immigrants to Israel. A former head of Israel’s main West Bank settlers council, he heads an unlikely coalition of left-wing, right-wing, centrist and Arab parties.

With consensus on Palestinian statehood virtually impossible within the Israeli government, Biden and his aides are not expected to press Bennett for any major concessions towards the Palestinians in his first foreign visit.

The two leaders are expected to speak briefly to a small pool of reporters during their Oval Office meeting, but will not hold a joint news conference.

But even with little sign of U.S. pressure to resume “peace” negotiations with the Palestinians that collapsed in 2014, Israel faces concern from Washington over its settlement activity in areas it captured in the 1967 Middle East war.

The Biden administration has already made clear it opposes further expansion of Jewish settlements on occupied land. Most countries consider such settlements illegal under international law.

So far, Bennett, who has advocated annexation of the West Bank, has moved cautiously on the settlement issue.

Scheduled approval last week of 2,200 new settler homes, along with 800 houses for Palestinians, was postponed, apparently to avoid dissonance with Washington ahead of Bennett’s visit, which he said would include meetings on Wednesday with U.S. Secretary of State Antony Blinken and Defense Secretary Lloyd Austin. Human-rights in the U.S. and abroad have said de-facto annexation is continuing, even if it is not formally announced, noting Israeli policies against Palestinians in East Jerusalem.

Rising tensions and violence along the Israel-Gaza border, three months after an 11-day war between Israeli forces and Palestinian militants, could cast a shadow over Bennett’s trip.