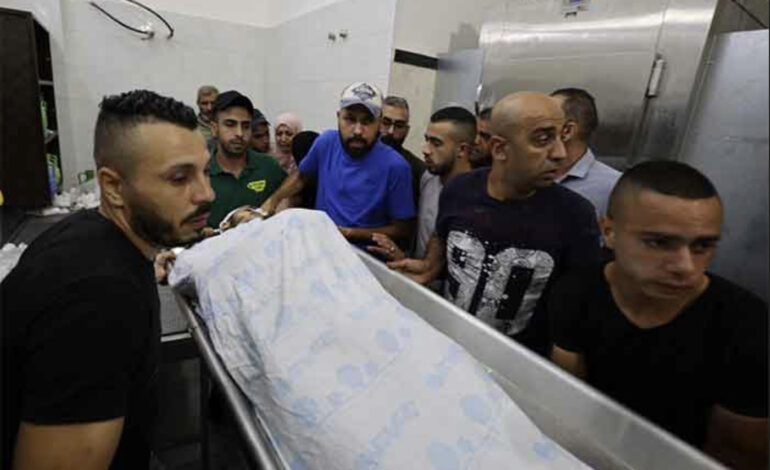 Friends and relatives carry the body of Palestinian Raed Abu Saif, killed by Israeli forces in the Jenin refugee camp, at the Jenin hospital morgue on Aug. 16. Photo: AFP

The killing of four young Palestinians by Israeli occupation soldiers in the Jenin refugee camp in the northern West Bank, on Aug. 16, is a consequential event, the repercussions of which are sure to be felt in the coming weeks and months.

The four Palestinians — Saleh Mohammed Ammar, 19, Raed Ziad Abu Seif, 21, Nour Jarrar, 19 and Amjad Hussainiya, 20  — were either newly born or mere toddlers when the Israeli army invaded Jenin in April 2002. The objective, then, based on statements by Israeli officials and army generals, was to teach Jenin a lesson, one they hoped would be understood by other resisting Palestinian areas throughout the occupied West Bank.

In my book, Searching Jenin, published a few months after what is now known as the “Massacre of Jenin” or the “Battle of Jenin”, I tried to convey the revolutionary spirit of this place. Although, in some ways, the camp was a representation of the wider Palestinian struggle, in other aspects it was a unique phenomenon, deserving of a thorough analysis and understanding. By the end of that battle, Israel seemed to have entirely eliminated the armed resistance of Jenin. Hundreds of fighters and civilians were killed and wounded, hundreds more arrested and numerous homes destroyed. Even voices sympathetic to the Palestinian struggle have underestimated Jenin’s ability to resurrect its resistance under seemingly impossible circumstances.

Writing in the Israeli newspaper Haaretz on June 10, 2016, Gideon Levy and Alex Levac described the state of affairs in the small camp. “Jenin, always the most militant of the refugee camps, was battered and destroyed, suppressed and bloodied, by Israel. These days its spirit seems to be broken. Every person is dealing with his own fate, his own private struggle for survival,” they wrote. The title of their article was “Jenin, Once the Most Militant of Palestinian Refugee Camps, Waves a White Flag.”

The Israeli attempt at ethnically cleansing Palestinian families from the Sheikh Jarrah neighborhood in East Jerusalem, the subsequent war on Gaza and the unprecedented uprising of unity, bringing all Palestinians, everywhere, together, lifted Jenin and other Palestinian areas from their state of despondency.

Being suppressed and shattered by an overwhelming force, however, is entirely different from “raising the white flag.” In fact, this truism does not just apply to Jenin but to the entirety of occupied Palestine, where Palestinians, at times, find themselves fighting on multiple fronts: Israeli occupation, armed illegal Jewish settlers and the co-opted Palestinian Authority.

However, May 2021 changed so much. The Israeli attempt at ethnically cleansing Palestinian families from the Sheikh Jarrah neighborhood in East Jerusalem, the subsequent war on Gaza and the unprecedented uprising of unity, bringing all Palestinians, everywhere, together, lifted Jenin and other Palestinian areas from their state of despondency. The stiff resistance in Gaza, in particular, has had a direct impact on the various fighting groups in the West Bank, which were either disbanded or marginalized.

An unprecedented scene in Ramallah, on May 17, tells the whole story. Tens of fighters, belonging to the Al-Aqsa Martyrs Brigades, which is affiliated with the Fatah movement — the political party that dominates Mahmoud Abbas’ PA — marched on the streets of Ramallah, where the Authority is situated, in a relatively calm environment. The fighters chanted against the Israeli occupation and their “collaborators” before clashing with Israeli soldiers, who were manning the Qalandiya military checkpoint.

This event was quite unusual, for it ushered in the return of a phenomenon that Israel, with the help of its “collaborators”, had crushed during the Second Palestinian Intifada —  or uprising — between 2000-2005.

The Israeli military understands that the May war and uprising have triggered an unwelcomed transition in Palestinian society. Long-suppressed, occupied Palestinians are ready to rebel, eager to move on, beyond octogenarian Abbas and his corrupt clique, past the stifling factionalism and self-serving political discourses.  The questions are how, where and when.

This is precisely why Israel is back in Jenin, once more trying to teach the nearly 12,000 refugees there a lesson, one that is also meant for Palestinians throughout the West Bank. Israel believes that if the nascent armed resistance in Jenin is suppressed now, the rest of the West Bank will remain “quiet.” Women whose house in the Jenin refugee camp was destroyed by the Israeli troopsreturn to the rubble of their homes, April, 2002. Photo via KRT

According to Palestinian journalist Atef Daghlas, the Israeli occupation forces killed 10 Palestinians during their frequent nightly raids on Jenin. Eight of the victims have been killed since the end of the Gaza war alone. There are two main reasons behind the increased number of casualties among the Palestinians in the last few months: First, the increased number of Israeli raids — where occupation soldiers, often disguising themselves as Palestinians, enter the camp at night and attempt to capture young Palestinian fighters; second, because of the growing number of youth enlisting in various resistance groups. According to Daghlas, the rifles carried by these youth are purchased by the young men themselves, as opposed to being supplied by a group or a faction.

It is obvious that what is currently taking place in Jenin is indicative of something much larger. Israel knows this, thus the exaggerated violence against the camp.

“Blood for blood, bullet for bullet, fire for fire” were some of the chants that echoed in the Jenin town and its adjacent refugee camp, when the Palestinian residents carried the bodies of two of the four killed youth, before burying them in the ever-crowded martyrs’ graveyard. The fact that Jenin is, once more, openly championing the armed struggle option is sending alarm bells throughout occupied Palestine. Israel is now worried that an armed Intifada is in the making, and Abbas knows very well that any kind of Intifada would spell doom for his Authority.

It is obvious that what is currently taking place in Jenin is indicative of something much larger. Israel knows this, thus the exaggerated violence against the camp. In fact, two of the bodies of killed Palestinians are yet to be returned to their families for proper burial. Israel often resorts to this tactic as a bargaining chip, and to increase the psychological pressure on Palestinian communities, especially those who dare resist.

It might be relevant to note that the Jenin refugee camp was officially formed in 1953, a few years after the Nakba of 1948, the year when historic Palestine was destroyed and the State of Israel was created. Since then, generation after generation, Jenin’s youth continue fighting and dying for their freedom.

It turns out that Jenin never waved the white flag after all and that the battle which began in 2002 — in fact in 1948 — was never truly finished.