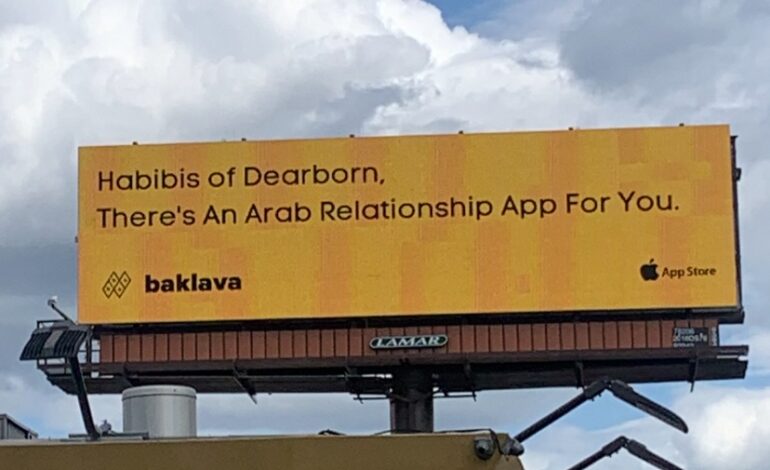 Over the summer, many in Dearborn may have noticed a billboard for an Arab relationship app. Baklava entered the online dating market with the goals of providing a familiar and relatable platform for young Arabs who want to connect with each other and build relationships and friendships, locally and across the world.

In the U.S., the online dating industry saw about 43 million users on different online dating apps in 2020. The industry is projected to grow to $10,378 million in revenue by 2026.

In line with social media trends, the Baklava app integrates the swipe-like-comment features people enjoy in popular apps like Instagram and TikTok.

The app is steeped in recognizable Arabic cultural cues. From oriental graphic illustrations of the classic Arabic love poem “Leila and Majnoun”, to tongue-in-cheek prompts like “doctor, engineer or disappointment”, the app wholeheartedly displays the Arabic heritage and lightheartedly teases its stereotypes.

Baklava Inc.’s founder Leila Muhaizen spoke to The Arab American News about the app and the dynamics of finding a significant other in the Arab American world (though the app’s reach is global).

“We designed Baklava to have a stellar sense of representation of the Arabic culture to solidify our shared identity with members,” said Muhaizen, a Lebanese American living in Los Angeles. The app’s developers did extensive market research in one of the country’s most concentrated Arab hubs: Dearborn. Muhaizen said Dearborn has been instrumental in shaping the millennial Arab American identity and in understanding Baklava’s user-base.

“Extensive market research of the ‘Dearborn Arab’ revealed several key findings that helped us develop the app in the most thoughtful, meaningful way possible,” Muhaizen said.

She said an undeniable observation was that “patriotism” was “a core value” among young Arabs, who hold a strong sense of pride in their national heritage. The app acknowledges this by letting members showcase their countries’ flag(s) as one of the first steps to building their profiles.

Another observation was that “love knows no distance.”

“Our surveys revealed that men and women were more willing to move across the country to be with their true love, than settle for someone local,” Muhaizen said. “This finding prompted Baklava to expand its reach from the U.S. to the world.” To our amusement, the most common request from our members was ‘save me from marrying my cousin!’ We’re honored to be your superheroes. — Leila Muhaizen

The app recently brought newlyweds from Baltimore to Honolulu, from Los Angeles to Seattle and many more.

Muhaizen said that many Arab Americans are willing to move away from arranged marriages and traditional matchmaking to embrace the word of online dating.

“To our amusement, the most common request from our members was ‘save me from marrying my cousin!’” Muhaizen said. “We’re honored to be your superheroes.”

Members can also use the app to scout for like-minded Arab friends. The app allows for a fully developed friendship mode, called Baklava Besties, so users can find friends with similar interests such as “hiking”, “playing tarneeb card games” or “going to shisha lounges.”

Some taglines from users read “I’m married and new in town, looking to meet Arab friends! PS: My husband knows I’m here!” or “Need friends who can read my fortune in Arabic coffee cups.”

Muhaizen said Baklava hopes to build the future of love, friendship and community and chip away at archaic taboos. The app’s beginnings signal some of that change.

“As an Arab women-founded startup, we continue to pave the way for more remarkable women in tech by mentoring and championing each other,” she said. “Together, we can break down barriers.”

Baklava is available for download on the AppStore worldwide. The Android version will come to Google Play in early September.