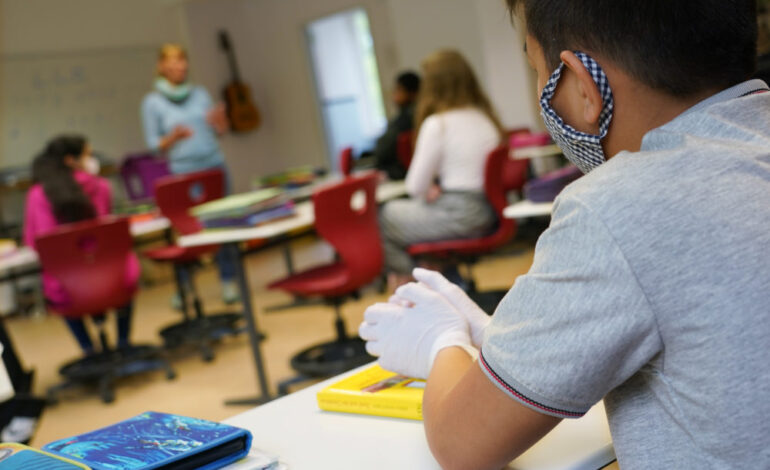 MARIN COUNTY, CALIFORNIA — A report published by the CDC details a case of an unvaccinated teacher who infected half a class of students with COVID-19 just by reciting a story for them unmasked. The report made headlines this week as schools went through a tense decision process to allow full in-person learning, but with many districts choosing strict mask mandates for students and staff.

Such a detailed report about one case study is not a usual occurrence from the CDC, but the mere fact of its publishing echoes the anxiety and uncertainty around school reopening across the country in the face of highly contagious COVID-19 variants, unvaccinated children, adult hesitation over vaccinations and the political turmoil around mandates.

The report says that from May 23–June 12, 26 laboratory-confirmed COVID-19 cases occurred among Marin County, California, elementary school students and their contacts following exposure to an unvaccinated infected teacher.

The CDC found that the “attack rate” in one affected classroom was 50 percent and that the spread of the infection correlated or matched the seating arrangement and distance between the students and teacher.

The report also says that on May 25, the Marin County Department of Public Health (MCPH) was notified by an elementary school that a few days earlier an unvaccinated teacher had reported receiving a positive COVID-19 test result. The teacher reported becoming symptomatic a few days before her test, with nasal congestion and fatigue, but attributed the symptoms to allergies. The teacher continued to work for two days before receiving a test on May 21.

During a class, the teacher read aloud unmasked to the class despite school requirements to mask while indoors.

Beginning May 23, additional cases of COVID-19 were reported among other staff members, students, parents and siblings connected to the school.

This spread prompted the local health department to begin a case investigation and contact tracing. A total of 27 cases were identified, including that of the teacher. During May 23–26, among the teacher’s 24 students, 22, all ineligible for vaccination because of age, received COVID-19 tests. Of those, 12 students, or half of the class, were positive for the virus.

Even more concerning was that interviews with parents of the infected students suggested that students’ adherence to masking and distancing guidelines were in line with CDC recommendations.

If teacher has no mask, move to the back of the class — Tweet from an infectious disease expert

The CDC says the investigation revealed that the likelihood of catching the bug in the two rows seated closest to the teacher’s desk was 80 percent (eight of 10 students) and was 28 percent (four of 14 students) in the three back rows. Through the period in question, all students’ desks were separated by 6 feet, but that did not stop the virus from spreading across the classroom.

During May 24–June 1, six of 18 students in a separate grade at the school, all also too young for a vaccination, received positive COVID-19 test results. Eight additional cases were also identified, all in parents and siblings of students in these two grades. Among these additional cases, three were fully vaccinated. Among the 27 total cases, 22 (81 percent) people reported symptoms; the most frequently reported symptoms were fever (41 percent), cough (33 percent), headache (26 percent) and sore throat (26 percent).

All 18 available tests specimens had the Delta variant.

The story of the CDC report prompted one expert to come up with a creative expression, or rule of thumb.

“If teacher has no mask, move to the back of the class,” tweeted Edward Traver, infectious disease fellow at the University of Maryland Medical Center.

The CDC says vaccines are effective against the Delta variant, but risk of transmission remains elevated among unvaccinated persons in schools without strict adherence to prevention strategies.

“This outbreak of COVID-19 that originated with an unvaccinated teacher highlights the importance of vaccinating school staff members who are in close indoor contact with children ineligible for vaccination as schools reopen,” the report says. “The outbreak’s attack rate highlights the Delta variant’s increased transmissibility and potential for rapid spread, especially in unvaccinated populations such as schoolchildren too young for vaccination.”

The report also says that further transmission might have been prevented by high levels of community vaccination. At the time of this outbreak, approximately 72 percent of eligible persons in the city where the school is located were fully vaccinated.

Though the disease hits older adults much harder, severe illness and death is not entirely uncommon among children. The CDC is strongly recommending universal masking in schools across the nation as a new school year commences.

The approach to school reopening in Michigan shifted over time as the state prepared to send kids back to classrooms. The state originally left the decision to mandate masks entirely up to local districts over the summer, sparking volatile board meetings with anti-vax and COVID-denying parents speaking against such mandates.

Recently, three populous counties, Wayne, Oakland and Washtenaw, took matters into their own hands and are now requiring all districts and child care facilities to require masks. Public health experts anticipate that approval of vaccine use in young children by the federal government could come as soon as this winter.

The full CDC report can be read on its website in the “Morbidity and Mortality Weekly Report (MMWR)” section.

CAIR: Federal assistance to local police should be tied to hate crime reporting