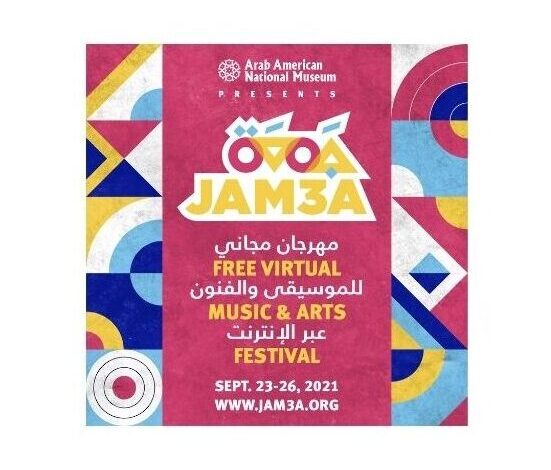 Performing at JAM3A will be:

Originally planned as an in-person festival, JAM3A (Arabic for “gathering”) has moved to a virtual platform to maintain the safety of audience members during COVID-19, while also increasing accessibility to the amazing Arab artists presented, as many of them are internationally based and unable to travel at this time.

Entirely FREE to the public, the festival will be live-streamed across various platforms. In addition to musical performances, the festival will include artist talkbacks and film screenings, featuring the musical and artistic talent of the Arab and Arab American community, as well as a virtual marketplace highlighting SWANA (Southwest Asian/North African) small businesses from across the nation.

JAM3A engages communities in uplifting and experiencing the many cultures of the Arab World and its diaspora. With anticipated daily audiences in the thousands, this festival activates the AANM’s cultivated national and worldwide virtual audience. This event showcases the depth and diversity of the Arab and Arab American community in an inclusive, dynamic format.

Attendees can register at www.jam3a.org/schedule

This event is presented in partnership with Arab.AMP, the Detroit Institute of Arts (DIA), East Downtown Dearborn Development Authority, NYU Abu Dhabi, UMS and YallaPunk. For more updates and information on JAM3A, visit www.jam3a.org or www.arabamericanmuseum.org

The Arab American National Museum (AANM) documents, preserves and presents Arab American history, culture and contributions. The AANM is a national institution of ACCESS, the largest Arab American community nonprofit in the U.S. The AANM is accredited by the American Alliance of Museums; an Affiliate of the Smithsonian Institution and a founding member of the Immigration and Civil Rights Network of the International Coalition of Sites of Conscience. The museum is located at 13624 Michigan Ave., Dearborn, MI, 48126. Visit www.arabamericanmuseum.org or call 313.429.2535 for further information.

To inquire about JAM3A, contact Lujine Nasralla, AANM communications specialist, at 313-658-7780 or reach out via email at lnasralla@accesscommunity.org