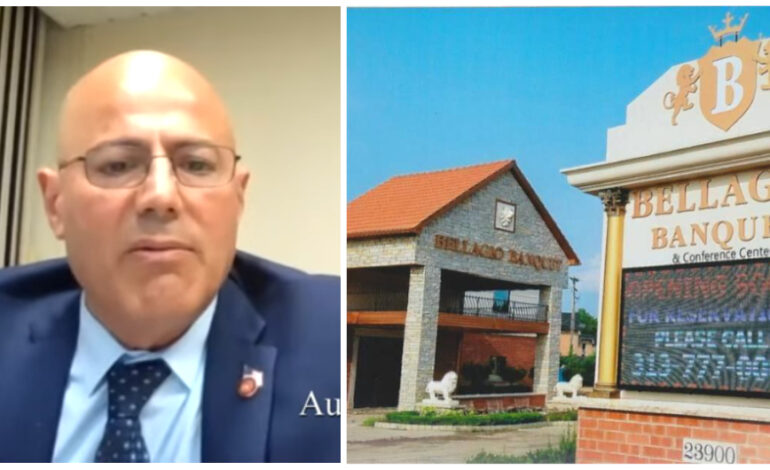 DEARBORN HEIGHTS — After nearly a month of back-and-forth, tension-filled meetings and allegations, Mayor Bill Bazzi is addressing the water bill debacle in detail.

Council Chairwoman Denise Malinowski-Maxwell alleged that Bazzi had written off more than $30,000 worth of water bills for the Bellagio Banquet and Conference Center on Warren Rd. because the owners were “supporting Bazzi’s campaign.”

“Unfortunately, false information has been released and reckless accusations have been made about this matter,” Bazzi said. “These accusations have led to confusion, misunderstanding and residents questioning the method used for their own water bills. However, by looking at the facts, residents may rest assured that this was an isolated overbilling mistake by the city and that we moved quickly to correct the problem. In addition, we are implementing safeguards to prevent this from happening to another small business owner or resident.”

According to a press release received by The Arab American News, on Jan. 13, attorney Sam Fakih sent a letter to Malinowski-Maxwell, who was interim mayor at the time, regarding the water bill for Bellagio Banquets, LLC and Bellagio of Dearborn Heights, Inc. This was later followed by a second letter.

In his letters, Fakih objected to Bellagio’s water bill of $43,145.78 and requested a re-calculation of the bill, which he said appeared to have been issued in error.

Fakih explained that Bellagio, a large banquet facility that typically holds group gatherings and events, was forced to close its doors due to the COVID-19 pandemic and orders issued by the state of Michigan.

As mayor, I will work every day to protect our residents and small business owners. — Mayor Bill Bazzi

A review of Bellagio’s own records also showed that the billing cycle for September 2020 was only $169.64, which Fakih said made it unclear as to how the claimed balance could be in excess of $40,000.

Fakih also said that the Bellagio had paid all of its water bills on time since opening for business and that prior to opening, it was under construction for years with little to no water usage.

On Feb. 8, Bazzi discussed the matter and the letters from Fakih with Corporation Counsel Gary Miotke and the city’s comptroller and deputy comptroller.

“Following my request for this issue to be investigated further, we were instructed that only about 800 units versus 3,200 units could be documented and verified,” Bazzi said. “This equated to a 400 percent difference in what was billed and what could be verified. Based on this, we were told that a documentable charge of only around $10,000 was due.”

City records showed that the Bellagio was billed in error and that most of the charges that were in dispute were based on a prior “estimate” that had taken place and the records also showed that the amount was an intentionally-set “high” estimate, according to the release.

Based on the information that had been discovered, Bazzi then instructed the appropriate departments to correct the incorrect bill.

“Correcting Bellagio’s water bill was the right thing to do,” Bazzi said. “As mayor, I will work every day to protect our residents and small business owners. When a mistake is made by City Hall that harms our residents physically or financially it is imperative that we address it as soon as possible, not play politics or mislead the public.” Bazzi also said that the accusations that he waived the bill for his “supporters” is false.

“Some individuals have had political motives to make wild, unsubstantiated and false accusations about the correction of this water bill,” he said. “By paying attention to the documentable facts and using common sense, it’s clear that this water bill was justifiably and properly corrected. Again, in this case the city charged a small business owner, who was forced to close during the pandemic, 400 percent more than what could be documented.”

Despite the accusations and tensions this has caused, Bazzi said that he would make the same decision if he had to do it all over again.

“It was the right thing to do,” he said. “Our residents and small business owners should be able to count on their elected officials to correct obvious mistakes in city bills. My office will be working with Robert Conrad, our new DPW director, to review all water billing policies and procedures to ensure that this does not happen again. False and reckless accusations are a waste of city time and resources, in addition to causing chaos and confusion while misleading the public. This administration will not succumb to harmful political distractions and will continue to focus on the real issues at hand as we work for the best interest of our residents and small businesses.”

Dearborn to host ceremony commemorating the 20th anniversary of 9/11