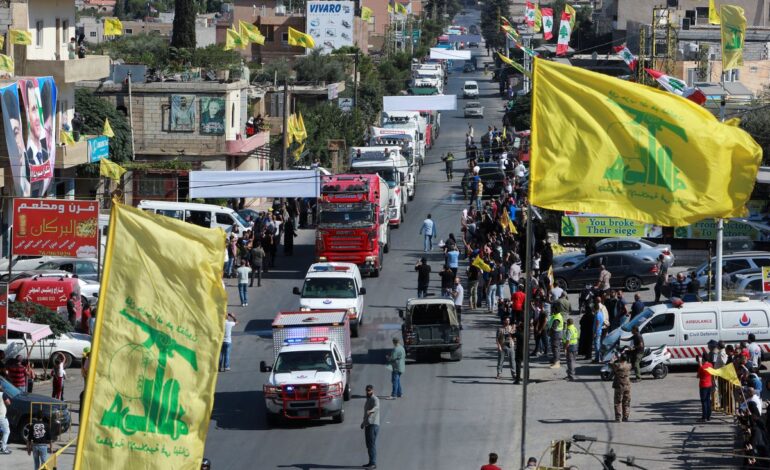 Hezbollah began bringing Iranian fuel into Lebanon via Syria on Thursday, a move the group says should ease a crippling energy crisis but which opponents say risks provoking U.S. sanctions.

The trucks sounded their horns as they passed through al-Ain. Some onlookers waved Hezbollah’s flag, while a woman and a boy threw flowers at one vehicle.

Hezbollah has said the ship carrying the fuel docked in Syria on Sunday after being told going to Lebanon could risk U.S. sanctions.

Washington has reiterated that U.S. sanctions on Iranian oil sales remain in place. But it has not said whether it is considering taking any action over the move by Hezbollah, which it designates a terrorist group.

The Lebanese government has said its permission was not sought to import the fuel from Iran through Syria. A security source said the tanker trucks passed through an unofficial border crossing. Hezbollah has long been part of Lebanon’s governing system, with ministers in the executive cabinet and members of the Lebanese parliament.

It has fought numerous wars with Israel and its fighters have helped the government of Syria that is led by Assad in the Syrian war.

Hezbollah has said it will donate fuel oil to institutions in need, including government hospitals and orphanages, and sell it at “an appropriate price” to others, including private hospitals, medical storage facilities and flour mills.

The energy crisis is a result of a financial meltdown since 2019, sinking the currency by some 90 percent and sending more than three quarters of the population into poverty.

Fuel supplies have dried up because Lebanon does not have enough hard currency to cover even vital imports, forcing essential services, including some hospitals, to scale back or shut down and sparking numerous security incidents.

Hezbollah declared it had broken an “American siege.”

Lebanon’s financial system unraveled as a result of decades of profligate spending by a state riddled with corruption and waste, and the unsustainable way it was financed.

The French ambassador rebuked the former prime minister in July for saying Lebanon was under siege, saying the crisis was the result of years of mismanagement and inaction by the Lebanese elite.

Western governments and donor institutions have said they will unlock aid once Lebanon enacts reforms.

The United States, a big supplier of humanitarian and military aid to Lebanon, is backing a plan to ease the energy crisis using Egyptian natural gas piped via Jordan and Syria. The U.S. ambassador has said Lebanon does not need Iranian fuel.

Hezbollah leader Sayyed Hassan Nasrallah has said a second ship with fuel oil will arrive in the Syrian port of Baniyas in a few days, with a third and fourth, respectively carrying gasoline and fuel oil, also due.

— Reuters, edited for style and contents by staff of The Arab American News