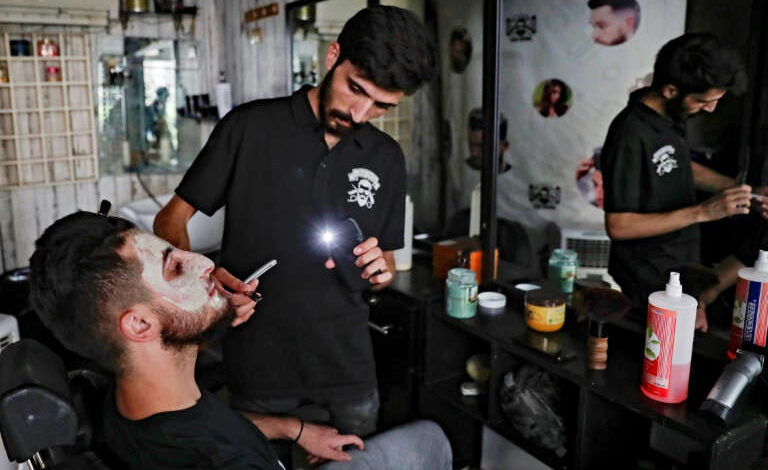 A barber uses the flashlight on his phone as he shaves a customer due to a power outage in Lebanon. Photo: Anwar Amro

BEIRUT — Lebanon’s state electricity company said on Thursday it risked a total blackout across the country by the end of September as its fuel oil reserves dwindle.

Lebanon, in the throes of one of the worst economic meltdowns of modern history, has been plagued by worsening fuel shortages for the past few months with most Lebanese relying on private generators for power.

The company can generate less than 500 megawatts from fuel oil it secured through a deal with Iraq, it said in a statement.

It said its reserves of both Grade A and Grade B fuel oil had reached a critical point and had run out already for some plants that have now stopped production.

“The network already experienced total blackouts across the country seven times and if this continues there is a high risk of reaching total and complete blackout by end September,” the statement said.

Iraq signed an agreement in July allowing the cash-strapped Lebanese government to pay for 1 million tons of heavy fuel oil a year in goods and services.

The heavy fuel oil is not suitable for use in Lebanon, but it is exchanged in tenders for a suitable grade.

The World Bank says the depression is one of the most severe since the mid-19th century: Gross domestic product shrank by 40 percent between 2018 and 2020. Even during Lebanon’s 1975-1990 civil war, the banks remained solvent and functional.

To date, ordinary Lebanese have paid the price of the country’s debt to the International Monetary Fund and other entities as they watched savings evaporate, the currency crumble and basic goods disappear from the shelves.

When a plan was drawn up last year that identified a $90 billion hole in the financial system, it was shot down by banks that complained it made them foot too much of the bill and by the ruling elite who had driven Lebanon into its crisis.

Since then, Lebanon has sunk deeper into trouble with no plan and no government until its fractious sectarian politicians ended a year of bickering and agreed a new cabinet this month.

The new prime minister, billionaire tycoon Najib Mikati, and his government are expected to acknowledge the scale of the country’s losses and work out how to share them out to deliver on a promise to secure IMF assistance with economic reforms.