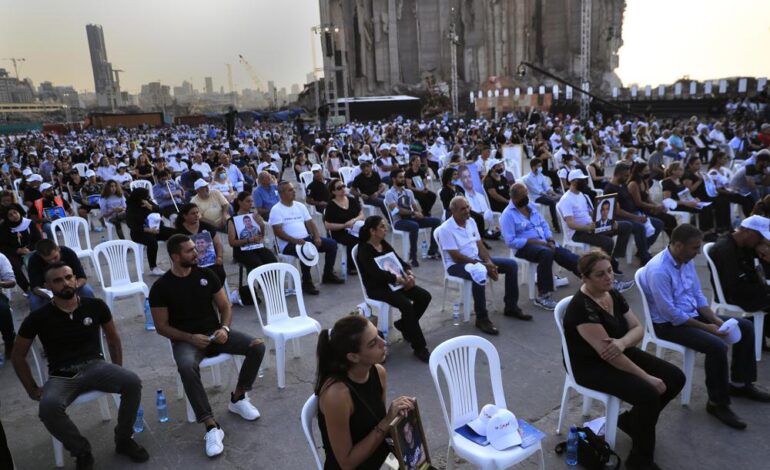 Relatives of victims who were killed in the massive blast last year at the Beirut port holds their portraits as they attend a Mass held to commemorate the first year anniversary of the deadly blast, at the Beirut port, Lebanon, Wednesday, Aug. 4. Photo: Hussein Malla/AP

BEIRUT — The judge investigating Beirut’s catastrophic port explosion survived attempts to have him removed from the inquiry when a court dismissed two complaints against him on Monday.

The investigation into the Aug. 4, 2020 explosion, one of the biggest non-nuclear blasts in history, has made little headway amid a smear campaign against Judge Tarek Bitar and pushback from powerful Lebanese factions.

A senior official in the powerful Iran-backed Hezbollah had warned Bitar last month the group would remove him from the inquiry, according to a journalist and a judicial source.

The complaints against Bitar were lodged by three former ministers he had sought to charge with negligence leading to the blast, which was caused by a massive amount of ammonium nitrate left in the middle of Beirut. All three have denied any wrongdoing.

They questioned his partiality. Bitar has not commented on the accusations. He is not allowed to speak to the media.

Following Monday’s decision by the court of cassation, Bitar will now be able to resume requests to interrogate top officials.

But his efforts to question former and serving state officials — including the prime minister at the time of the blast, ex-ministers and senior security officials on suspicion of negligence — have been repeatedly denied.

Many in Lebanon, particularly families of the victims of the blast, which killed more than 200 people, are furious that no senior official has been held accountable more than a year on.

The ministers who sought Bitar’s removal from the investigation were Nohad Machnouk, a Sunni Muslim MP who was formerly interior minister, and two MPs from the Shi’a Muslim Amal Movement — Ali Hassan Khalil, the former finance minister, and Ghazi Zeaiter, the former public works and transport minister.

They did not immediately respond on Monday to requests for comment on the dismissal of their complaints.

Bitar took over the case when his predecessor, Judge Fadi Sawan, was removed from the investigation in February, on the basis of complaints alleging bias.

The Hezbollah official who delivered the warning to Bitar was Wafik Safa, according to a journalist who says she conveyed the oral message and a judicial source. Safa has not responded to repeated requests for comment.

Bitar described the message in a letter to the public prosecutor. The justice minister and judiciary are following up on the matter, the judicial source said last week.