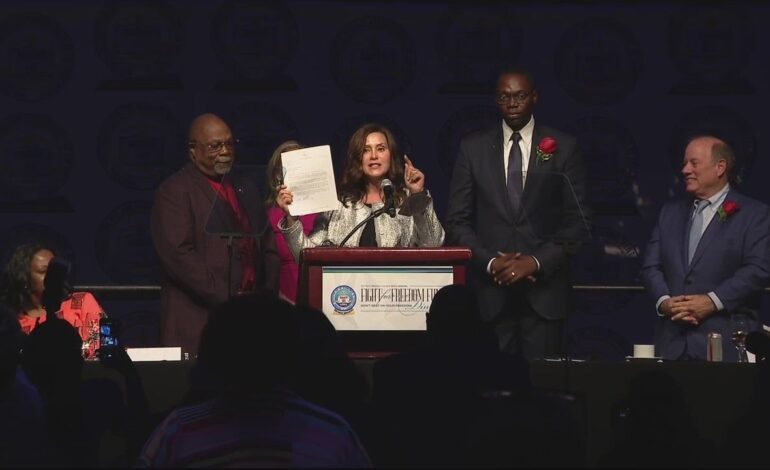 The bills follow a tumultuous November 2020 election, in which former president Trump falsely claimed there was widespread vote rigging and fraud nationally in an election he lost to President Biden. The accusations played out in more than 60 lawsuits thrown out by both Republican and Democrat judges, and were rejected by both Republican and Democratic elation officials.

Whitmer’s veto had symbolism, as the theme of Sunday’s 66th annual Detroit chapter of the NAACP dinner held at Detroit’s TCF Center —which attracts some of the country’s most powerful Democratic figures — was geared towards voting rights.

Outgoing ACCESS CEO and president Hassan Jaber was also presented a lifetime achievement award at the event on Sunday.

“I am laser focused on kitchen-table issues that get things done for Michiganders, like fixing the roads, ensuring clean water and providing good-paying jobs,” Whitmer said in her veto letter. “We can and should work together on election policy, as well — but only in ways that strengthen our democracy. I am ready to join hands with anyone who shares these goals.”

One Republican bill, House Bill 4838, claims to prohibit the electronic poll book at each election precinct or absent voter (AV) counting board from being connected to the Internet after the polls open on election day and until the results have been tabulated for that precinct and transmitted to the appropriate clerk.

But this legislation addresses a non-existent problem as poll books are not currently connected to the Internet on election day and until the results have been tabulated for that precinct.

Whitmer also vetoed two other items of legislation. State Democrats have said House Bill 4492 would make it more difficult to locate polling locations in senior living facilities and large apartment complexes, among other defects. The bill would have have allowed privately owned buildings, such as golf courses or hotel conference centers, to serve as polling locations.

House Bill 4837 implies that third parties, outside of state election officials, have access to the Qualified Voter File (QVF), which they do not.

Whitmer’s administration says that together, HB 4837 and 4838 perpetuate the “Big Lie” by suggesting there is a defect in the state’s election system. A hand-count audit recently conducted by the Secretary of State did not yield any major discrepancies on more than 18,000 ballots randomly selected across the state.

The Trump campaign also paid for and lost recounts in other states following the general elections. By December, the Trump campaign had spent close to $9 million in efforts to overturn the results of the election. Trump’s accusation also led his followers to take part in a deadly insurrection at the U.S. Capitol on Jan 6, during the election’s certification by Congress.

Whitmer’s administration insists that the 2020 election was free, secure and accurate. The results were certified and officially audited by trusted local election officials, as required by law. Whitmer said after vetoing the bills that the state’s Republicans are participating in a coordinated, national attack on voting rights that is designed to undermine confidence in the election system and systematically disenfranchise Black voters, communities of color, older voters and college students.

“The governor demonstrated once again that she is the people’s governor,” said NAACP Detroit Chapter President Rev. Dr. Wendell Anthony. “She is the governor wherever she is from her desk in Lansing to a dinner at the NAACP. She is still Big Gretch and has the pen to prove it.”

Whitmer also vetoed House Bill 4528, which concerns training for election challengers, saying that while it is worth further consideration, it must have the necessary funding to accomplish its purpose, which the bill does not include.