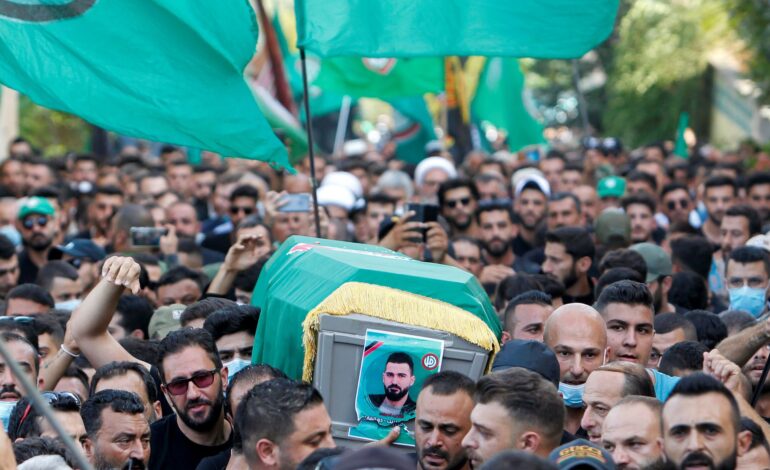 Supporters of the Shi'a Amal Movement carry the coffin of a man who was killed in violence in Beirut, during his funeral in Nmairiyeh village, southern Lebanon, Oct. 15. Photo: Aziz Taher/Reuters

The subject of decades-old sectarian strife has been rekindled in Lebanon, following a deadly shooting of protesters last Thursday.

The leader of the Christian Lebanese Forces (LF) dismissed accusations by Hezbollah that it has a militia and seeks civil war as the fallout of deadly violence, in which seven Shi’a Lebanese were shot as supporters of Hezbollah and its ally Amal were gathering for a demonstration against the lead investigator in last year’s Beirut port blast probe.

Earlier in the week, Hezbollah leader Sayyed Hassan Nasrallah lashed out at the LF party and its head, Samir Geagea, repeating accusations that they were responsible for the killings on Thursday.

Hezbollah said snipers had shot from the tops of buildings intending to kill people.

But LF denied it started the fighting last week. It blamed the violence on Hezbollah “incitement” against Tarek Bitar, the lead investigator in an investigation into the port explosion. Hezbollah and others have criticized Bitar for leading a biased and selective investigation. You have a new generation right now that did not live through the Civil War. Young people don’t remember that war; that’s a problem. — Salim Sassine

The bloodshed has reawakened memories of the country’s 1975-1990 Civil War and Lebanese Americans who lived through that time are fearing a return of bitter sectarianism.

“What took place last Thursday is extremely dangerous,” Salim Sassine, a concerned Lebanese American businessman, told The Arab American News. “You have a new generation right now that did not live through the Civil War. Young people don’t remember that war; that’s a problem.”

Sassine said the events bring up memories of killing and destruction that created hatred within the community, especially among religious factions.

“My generation lived through the Civil War and fled it; we are here because of that war,” said former U.S. federal prosecutor Abed Hammoud. “We know this stuff is serious and sometimes we speak to younger generations, whether here or in Lebanon, and they say ‘let the chips fall where they may’, but my generation knows this is serious; lots of people can die and it doesn’t go anywhere (productive).”

Hammoud said that many believe that certain elements are trying to drive the country into civil strife on purpose.

Some parties believe that a war that Hezbollah and its allies could be dragged into may change the balance of power in Lebanon. – Abed Hammoud

“Some parties believe that a war that Hezbollah and its allies could be dragged into may change the balance of power in Lebanon,” Hammoud said. “In my opinion, and the opinion shared by many I’ve spoken to, is that this was a deliberate attempt by people that believe inner fighting will change that balance.”

“To any human, what happened was an atrocity and a flagrant, unprovoked attack on unarmed civilians,” Salamey said. “We should always wait till the full investigation is concluded by judicial authorities and security agencies in Lebanon into what happened, but preliminary reports show that this is was a preplanned and premeditated attack on unarmed civilians that were expressing their opinions peacefully.”

Salamey said Lebanese security forces had full details of the route the protest was taking and their activities, and it should have been afforded better protection.

“Unfortunately, with the country so polarized at this point, and tensions running so high and Lebanese facing such daily hardships because of sanctions and lack of hard currency to purchase fuel and buy necessities… to put this (shooting) on top of that, it’s a recipe for chaos.” A photo from the April 1975 bus massacre in Lebanon, an incident marking the start of the 15-year Lebanese Civil War.

A lot of Lebanese, when they mention the Civil War, we know that we cannot go through such a thing again; it is too heavy a burden. — Sam Salamey

Salamey said that if various leaders in Lebanon, and especially families of the victims, had not shown restraint, the situation could have easily gone out of control, leading to local skirmishes between different strongholds.

“A lot of Lebanese, when they mention the Civil War, we know that we cannot go through such a thing again; it is too heavy a burden,” Salamey said.