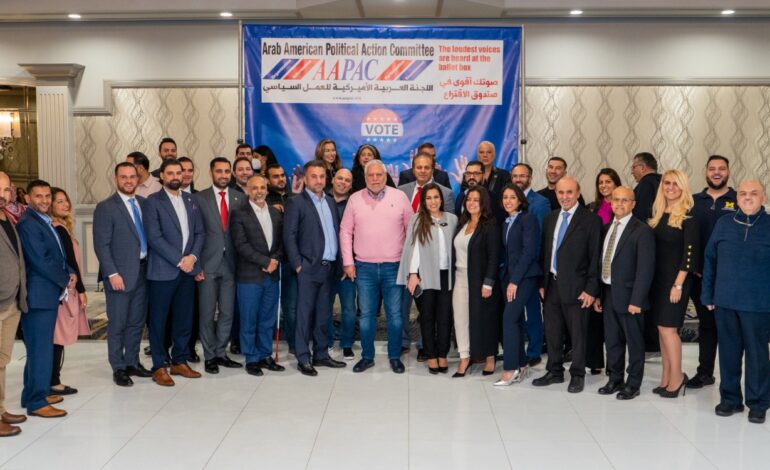 While the event was not as large as typically would be due to COVID, elected officials and candidates alike were in attendance.

“This is probably the most critical and historic election the city is seeing in three or four decades,” Osama Siblani, a member of AAPAC and publisher of The Arab American News, said. “Like every year, AAPAC deliberates how we can deliver the message on an election that is critical and historic on all terms. So this year, even though we were going through a pandemic, AAPAC did its homework.”

AAPAC only endorses candidates who seek its endorsement. “Those who are not endorsed by AAPAC, by no means does that mean that they are not good people,” Siblani said. “Some people are saying that it’s an ‘us versus them’, but we truly believe at AAPAC that we are all together in this race. We are all together because something needs to be done. We are all in this together because we need to have clean water. Today, with what is happening in Hamtramck and Benton Harbor and what has happened in Flint, people are being poisoned with lead in the water and this can happen anywhere if we are not vigilant.”

Siblani said it’s important for the city to have an administration that will ensure clean water for “us and our children.”

“When we say ‘for us and for our children’, we mean all the residents in Dearborn,” he said. “And we need to have clean air, because you and I know what is happening in our city and the county. Dirty air and contaminated air is being spread around by factories recklessly and some people are having problems breathing, not because an officer has a knee on their neck, but because some are spreading poison in our air. We should be very vigilant in protecting our people and that means everyone that breathes is one of our people.”

Siblani also highlighted the importance of safe roads, including doing something about reckless drivers and loud mufflers that prevent residents from sleeping at night. “We would like our children to sleep during the night,” he said. “And when I say ‘our children’, it means our children, everybody that resides in Dearborn. When we say we want a safer neighborhood, it means we want a safer neighborhood from the east, to the west, to the south because we live in every neighborhood and we believe that we are all in this together. The flood that is being seen in our neighborhoods, the flood doesn’t come to the Arab American community only; 12,000 homes in Dearborn were subjected to floods in six years and more than three floods. So we want an infrastructure to prevent this kind of flooding, and when we say ‘we want this’ we want it for everyone.”

With the city being one of the highest taxed municipalities statewide, Siblani said that younger people cannot afford to live in Dearborn.

We have amazing Arab American candidates that I am very proud of that are running. They are smart, they know the issues and they know how to handle themselves. I think whoever gets elected will do an amazing job. — Mona Fadlallah, president of AAPAC

“We need someone that comes up with a plan to reduce the higher taxes of properties and bring them down to a level where we can keep our youth in Dearborn, otherwise we are going to be a dying city,” he said. “Businesses are flying out of Dearborn because we have a city that is refusing to recognize that it is not a business-friendly city. Businesses do not want to stay in Dearborn and the burden on taxes goes to the residents. If it wasn’t for the Arab American community and businesses, Dearborn would have fallen and drowned in the damned flood. We are here to say that we are going to support candidates that have plans.”

Abed Hammoud, an attorney and member of AAPAC, said that he counts every voter by hand to see how many voters are Arab or Muslim American. AAPAC President Mona Fadlallah said that during the interview process, AAPAC had some of the most spectacular interviews this year, making the decision of who to endorse that much more difficult.

“There are some incredible candidates,” she said. “In case you hadn’t noticed, we had some of the most spectacular interviews, I feel like, since, I don’t know when the last time we had such incredible interviews. I think these were top notch. We have amazing Arab American candidates that I am very proud of that are running. They are smart, they know the issues, and they know how to handle themselves. I think whoever gets elected will do an amazing job.”

Yemeni activist Kalid Sharjrah said that AAPAC has taken young people and helped mentor them into true leaders for the city.

“I want to thank the candidates,” he said. “I was the first Yemeni to run for school board in 1997, and I never ran again because I know, and you probably see it and feel it, what you’re going through. The pain, the agony, the sacrifices, the sleeping a few hours at night. And now it’s more challenging with social media; you say one word and it gets twisted and you find out you have enemies you never thought of and you see that you have less friends and more enemies. But that’s what’s so unique about you, you’re taking that responsibility. And this year is a historical year. Why? Because we have visionaries, we have you running for these positions. We have a person who was born in the city of Dearborn, raised in the city of Dearborn, went to the public schools in the city of Dearborn, represented the city of Dearborn at the state level with pride that made every Dearborn resident say, ‘yes, that’s my state rep.’ And can you imagine when that same person becomes the mayor and the changes he’s going to make? He is here for the entire city of Dearborn, and what is good for the city of Dearborn is good for every single resident.”