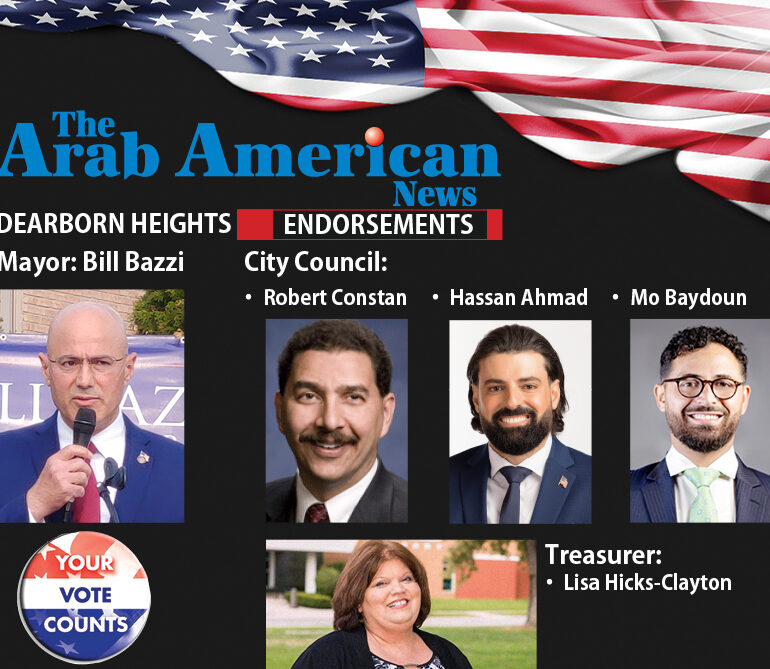 The Arab American News is endorsing three candidates for City Council, one for mayor and one for treasurer in the Nov. 2 election.

For mayor, The Arab American News is endorsing incumbent Mayor Bill Bazzi for both the partial and full term.

Bill Bazzi was appointed mayor on January 26 to succeed the late Daniel Paletko, who passed away unexpectedly. As such, Bazzi became the first Arab American mayor of Dearborn Heights, a city where it is estimated that more than 30 percent of registered voters are of Arab descent. He is now running to complete Paletko’s term (end of 2021) and for a new full term for four-years starting in January. Therefore, his name will appear on the ballot twice and voters must select him for both terms.

In his professional life, Bazzi has worked for Boeing, as a quality manager and lead auditor, and for Ford Motor Company as a product development engineer. He also served as a U.S. Marine for 21 years in multiple leadership capacities and previously served on Dearborn Heights City Council. Bazzi states that he is running for mayor to continue his commitment to serve the people of his city, which includes enhancing city services and equal access to resources, listening to residents and ensuring transparency in city government.

Bazzi believes that because last year’s budget resulted in lost revenue, additional funds are needed for city parks, infrastructure and senior citizen programs. As mayor, he has and continues to work with his new city team members to cut frivolous costs, apply for grants, remove red tape and encourage both improvements and new businesses which generate revenue.

Bazzi prides himself for having an open door policy and providing his email and phone number to everyone. He holds weekly video updates on city affairs and information, and makes himself accessible to city employees and residents. He is also working with his team to enhance technology and communication, update the city’s website, in addition to the city’s Facebook page, in order to keep residents informed. Bazzi has been on-the-ground with residents throughout the COVID pandemic, spearheading various drive-thru initiatives providing food, masks, books, toys and other resources.

For City Council, the endorsements are for incumbents Bob Constan and Mo Baydoun and newcomer Hassan Ahmad.

Having served the 16th District in the Michigan House of Representatives from 2007 to 2013, Constan has been on the City Council since 2013 and has had perfect attendance and voting record for the entirety of his time on the Council.

“I am running for re-election to the Dearborn Heights City Council to continue to closely monitor and scrutinize the city’s budget and the spending by the new administration,” he said in a Patch interview. “This year, the city of Dearborn Heights has plenty of cash on hand. The property values of homes in the city have increased significantly. In addition, the city of Dearborn Heights is receiving over $25 million in additional money from the federal government for the city’s share of the American Recovery Act. This additional money must be used to improve the roads and city infrastructure. The money must be invested wisely for needed capital improvements and infrastructure. Our sewer system must be upgraded to prevent the devastating basement flooding.” Baydoun was appointed to the City Council to finish out Lisa Hicks-Clayton’s term in January after she was elected to the treasurer’s position last November.

Having run for election in 2017, Baydoun lost by less than 300 votes, but told The Arab American News in June when he announced his candidacy this time around, that his reasons and purpose are the same.

“I believe I could provide a fresh perspective, enthusiasm and outside-the-box thinking to our City Council,” he said. “I’ve always been held accountable by the community. My top priority is improving the quality of life of all Dearborn Heights residents. This goal manifests itself in a number of ways, including rejuvenating programs and services for seniors, improving city services while enhancing public safety, maintaining fiscal responsibility and a balanced budget, cutting red tape to encourage business and job growth, revitalizing parks and recreation opportunities for our youth and restoring trust and transparency in our local government.”

Ahmad, a local realtor who has been a resident for more than 15 years and is raising his three children in the city, is encouraged to advance the city.

“I felt encouraged to run for City Council to help advance the city and ensure our residents are provided with the best customer service they deserve,” he said in an interview with The Arab American News when he announced his candidacy for City Council. “Community service is something that has been instilled in me at a very young age. It is a passion and a lifestyle. My bid for City Council seems the perfect opportunity to invest my experience, time and efforts and help advance our city. I strongly believe that my education, coupled with my work experience, ethics and passion for public service, make me the right candidate for this job, which I take very seriously.” Hicks-Clayton served as a City Councilwoman from 2012 to 2020 when she was elected by the voters to be the treasurer, finishing out former Treasurer John Riley’s term after he retired in early 2020.

“Since being elected in 2020, the treasurer’s office has increased communications and transparency for all public records of city funds and use of the citizen’s tax dollars,” she said in an interview with Patch. “In addition, I have instituted regular reporting and budget compliance with all elected officials. Preparing to launch a new payment platform, which is user friendly, safe and efficient for our residents. Options will include bill payment reminders, emailed and text receipts, online, app and kiosk payment centers throughout the city of Dearborn Heights. In addition, I have streamlined daily operations in the treasurer’s office, saving taxpayers’ funds while offering a high quality service by trained and professional staff.