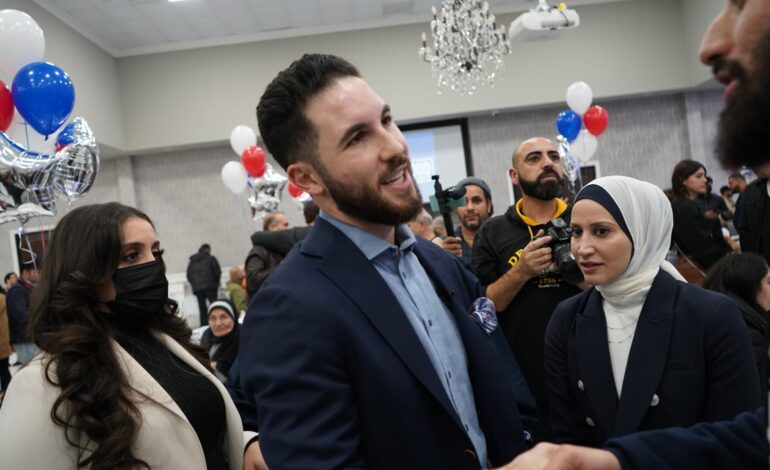 Abdullah Hammoud during his victory celebration after becoming the mayor-elect of Dearborn. “The people of Dearborn spoke loudly,” Hammoud said. “They want change and bold leadership to tackle the challenges we face. Our campaign united the city behind thoughtful solutions that will deliver the city government Dearborn deserves. We live in the greatest city in America and I’m excited about what we can achieve together when we rally around a common vision.”

Having made history as the first Muslim and Arab American to be elected mayor of Dearborn, Hammoud told The Arab American News it was never about that for him.

“We were always hopeful as the results started coming in and through the whole campaign,” he said. “I am extremely humbled to be able to serve in this capacity for my hometown. It’s still strange to think about, as we never ran on the idea of making history. We ran on the idea of doing what is best for Dearborn.

Be proud of who you are, as who you are is just as American as everyone else. — Mayor-elect Abdullah Hammoud

Hammoud’s campaign had focused around putting Dearborn’s working families first while seeking ways to reduce taxes without compromising service quality; and throughout the campaign, detailed plans and strategies were released on how to address the chronic flooding, crumbling infrastructure, reckless driving, inequities in health care and underfunded pensions.

“Solving complex problems requires reimagining how we do things, especially as we work to create a more resilient city amid the pandemic,” he said. “Dearborn has everything it needs to thrive. We have innovative entrepreneurs and hometown corporations, rich culture and vibrant neighborhoods; we just need to unite and work together as one city.”

Hammoud has launched a website to help ensure a seamless transition. The website, www.DearbornTransition.com, is aimed at building a transition team and will share information regarding city government while offering community members an avenue to provide input on assembling the new administration. Residents can sign up to receive updates as well.

We live in the greatest city in America and I’m excited about what we can achieve together when we rally around a common vision. – Abdullah Hammoud

“Throughout the campaign, we communicated to residents clearly, candidly and regularly, and that’s going to continue as we transition into office,” Hammoud said. “I want to thank Gary Woronchak and all the other candidates who ran in this election and helped Dearborn select its next mayor at such a critical time in our history.”

Hammoud and Woronchak emerged from the primary election, beating five other candidates and Hammoud took more than 40 percent of the vote.

The August primary had the highest municipal turnout in the city’s history, with turnout increasing 43 percent from the 2017 municipal primary election, including a major participation from voters between the ages of 18 and 35.

Hammoud had announced his candidacy in January and is serving his third and final term, due to term limits, as a state representative representing the 15th District, which is comprised of his hometown of Dearborn. Hammoud told The Arab American News that the governor will announce a special election for next year to find his replacement as state representative.

Having been born and raised in Dearborn, Hammoud said that he wants the community to know that it’s important for people to stay true to their roots.

“You need not change who you are,” he told The Arab American News. “Stay true to who you are, your ethnicity, your race, your religion and the sky’s the limit. There is nothing that you can’t achieve. Be proud of you are, as who you are is just as American as everyone else.”