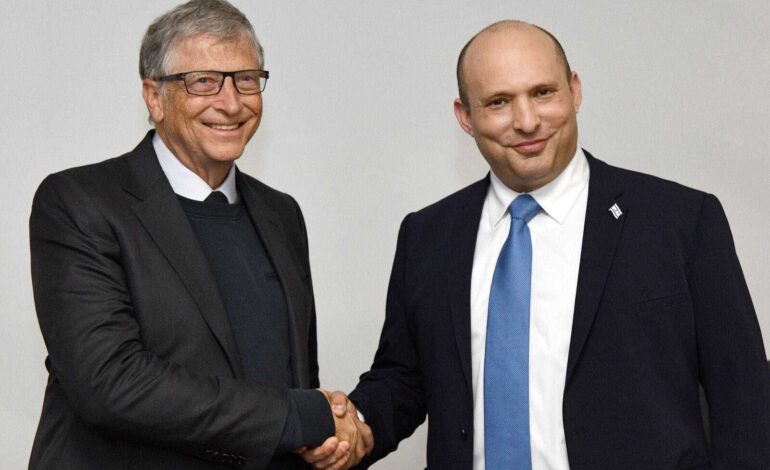 Those who are not familiar with how Israel, particularly the Israeli military occupation of Palestine, is actively and irreversibly damaging the environment might reach the erroneous conclusion that Tel Aviv is at the forefront of the global fight against climate change. The reality is the exact opposite.

Israel uses this particular brand to sell everything, whether to promote itself as the savior of Africa, to help governments intercept fleeing refugees, to push deadly weapons in the global market or, as Bennett has done in Scotland, supposedly save the environment.

Just before we hastily dismiss Bennett’s rhetoric as empty words, we must remember that some are actually buying into this Israeli propaganda, one of whom is the American billionaire, Bill Gates.

The day following Bennett’s speech, Gates met with the Israeli prime minister on the sidelines of COP26 to discuss the establishment of a “working group” to study potential cooperation “between the State of Israel and the Gates Foundation in the area of climate change innovation,” the Times of Israel newspaper reported.

According to the newspaper, Gates, who had asserted in his meeting with Bennett that only innovation can solve the problem of climate change, said, “That’s really what Israel is known for.”

Gates’ obsession with “innovation”, however, might have blinded him from addressing other issues that Israel is also “known for” – namely, being the world’s leading human rights violator, whose horrific track record of racial apartheid and violence is known to every member of the United Nations. Every act that is carried out to entrench the military occupation consolidates Israel’s colonial control and expanding illegal Jewish settlements directly impacts the Palestinian environment.

However, there is something else that Gates might also not be aware of – the systematic and purposeful destruction of the Palestinian environment, resulting from the Israeli occupation of Palestine and Tel Aviv’s insatiable appetite for military superiority, thus constant “innovation.”

Every act that is carried out to entrench the military occupation consolidates Israel’s colonial control and expanding illegal Jewish settlements directly impacts the Palestinian environment.

Not a single day passes without a Palestinian tree or an orchard being set ablaze or cut down. “Clearing” the Palestinian environment is, and has always been, the prerequisite of constructing or expanding Jewish settlements. For these colonies to be built, countless trees have to be “removed”, along with the Palestinians who have planted them.

Over the years, millions of Palestinian olive and fruit-bearing trees were uprooted in Israel’s constant hunger for more land. The soil erosion in many parts of occupied Palestine speaks volumes of this horrendous ecocide.

But it does not end here, of course. For hundreds of illegal Jewish settlements – hosting a population of more than 600,000 settlers – to survive, a heavy price is being exacted from the Palestinian environment on a daily basis. According to the thorough research of Ahmed Abofou, an independent legal researcher with Al-Haq rights group, illegal Israeli settlements “generate around 145,000 tons of domestic waste daily.” Abofou reported that “in 2016 alone, around 83 million cubic meters of wastewater were pumped throughout the West Bank.”

Moreover, Israel has near-total control of Palestinian water resources. It relies on the occupied West Bank’s aquifers to supplant its need for water, while denying Palestinians access to their own water.

According to Amnesty International, the average Israeli receives 300 liters of water per day, while a Palestinian receives a much smaller share of 73 liters. The problem is accentuated when the water usage of illegal Jewish settlers is taken into account. The average settler consumes as much as 800 liters per day, while entire Palestinian communities could be denied a drop of water for days and weeks, often as a form of collective punishment.

The issue with the water is not just that of outright theft, denial of access or unequal distribution of water resources. It is also that of the lack of clean and safe drinkable water, an issue that has been highlighted by international human rights groups for many years.

The result of these unfair policies has forced many Palestinians “to purchase water brought in by trucks” at prices “ranging from 4 to 10 USD per cubic meter,” Amnesty International found, highlighting that, for the poorest Palestinian communities, “water expenses can, at times, make up half of a family’s monthly income.”

As bad as the situation may sound, the plight of besieged Gaza is much worse than that of the occupied West Bank. The tiny and overcrowded Strip is the perfect example of Israeli cruelty. Two million Palestinians live there, while being denied the most basic human rights, let alone freedom of movement.

Those who are hurting the planet have no right to claim the role of being its saviors. Israel, in its current violent state, is the enemy of the environment and this is what it truly should be “known for.”

Since the Israeli military blockade on Gaza in 2007, the environment of the coastal region has been in constant deterioration. With little electricity and with bombed-out sewage plants, Palestinians have been forced to dump their unprocessed sewage into the sea. Gaza’s underground water is now polluted to the extent that 97 percent of the available water is now undrinkable, according to United Nations reports.

This is only the tip of the iceberg. From the destruction of Palestinian wells to the poisoning of trees, to the demolishing of entire ecosystems to make space for Israel’s apartheid wall, to the use of depleted uranium in its various wars against Gaza, Israel has been on an unrelenting mission to ruin Palestine’s environment in all of its manifestations.

In truth, Mr. Gates, this is what Israel is “known for” to anyone who cares to pay attention. Allowing Bennett to present his country as a potential savior of humanity, while validating Israel with massive investments in “innovation”, mischaracterizes – in fact, invalidates – the entire global campaign to truly understand the nature of the problem at hand.

Those who are hurting the planet have no right to claim the role of being its saviors. Israel, in its current violent state, is the enemy of the environment and this is what it truly should be “known for.”