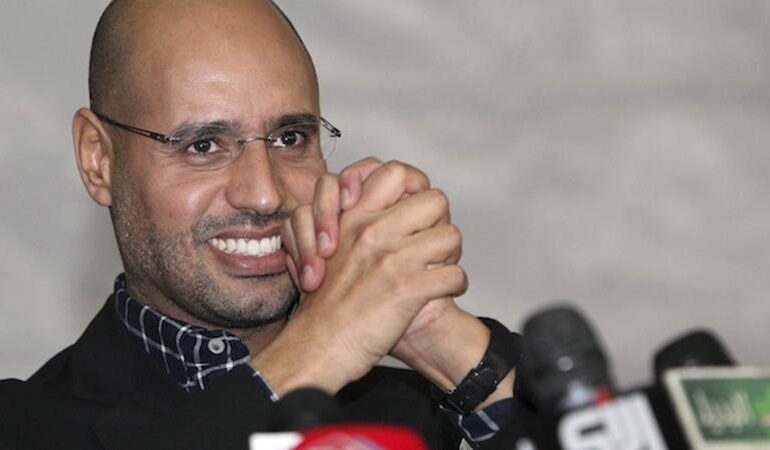 TRIPOLI — The entry of two men accused of war crimes into Libya’s presidential race has ramped up the perils of an election meant to help end years of chaos but which could instead set the fuse for a new conflict.

Saif al-Islam Gaddafi, wanted by the International Criminal Court for his role in crushing the 2011 revolution that toppled his father, Muammar Gaddafi, declared on Sunday, while eastern commander Khalifa Haftar, who laid siege to Tripoli from 2019-20, announced his bid on Tuesday.

During the Arab Spring in 2011, the U.S., under President Obama, and NATO led a seven-month campaign of continuous bombardment in Libya, killing thousands, razing much of the country and plunging it into a decade of violence and economic degradation.

U.S. and European forces utilized Al Qaeda-linked militias as their proxy ground troops in the war for regime change in the country, which eventually ended in the torture and murder of the senior Libyan leader, Gaddafi.

A complete breakdown of civil order in the country is now reflected in a lack of confidence in the elections. Gaddafi’s son’s announcement quickly led to street protests that temporarily closed election offices around Libya and to a statement by the council of a major city demanding his ejection from the race. Haftar’s candidacy could trigger similar scenes and threats to boycott the vote altogether.

Less than six weeks before the vote is due to take place, the discord over who should be allowed to run in the country’s first direct election for president looks poised to worsen.

Though Haftar, Gaddafi and other divisive figures from Libya’s violent recent past were expected to take part despite bitter opposition, their actual registration as candidates is loading fresh gunpowder into the keg, some Libyans fear.

It tests an approach that those supporting the push for elections privately say they want to see — subjecting Libya’s most prominent figures to national judgement via the ballot box.

“People are being asked to take a risk that a democratic process could result in something they find abhorrent… maybe it’s better to let the people decide,” said a diplomat.

Those who support that approach — including prominent candidates — say it is the only way to move towards a lasting political resolution and that cancelling or delaying the vote would be far more destabilizing than holding it.

Eastern factions have warned they may not accept the unity government’s rule beyond the Dec. 24 date set for the vote and that they could break off and again form a rival government if it does not go ahead.

However, the risks of pushing ahead without clear and widespread agreement on the rules governing the vote, including who should be allowed to run, remain evident.

Libyans remember the catastrophic aftermath of the last internationally backed elections in 2014, when a previous parliament and powerful armed groups rejected the election, citing a court ruling.

Those disputes ignited an already smoldering schism between eastern and western factions, plunging Libya into the war between rival administrations in Tripoli and Benghazi that the latest peace process is intended to resolve.

Despite a year of peace since Haftar’s assault on Tripoli was turned back, bringing the two sides to accept a unity government and elections, the wounds of that war are still raw.

Haftar’s attack on Tripoli left large parts of the city in ruins and its southern suburbs salted with deadly booby traps that have killed civilians. An allied group is accused of scores of killings in nearby Tarhouna and burying victims in mass graves. Haftar denies the abuses.

Gaddafi is wanted by the International Criminal Court for war crimes it says state security forces committed in 2011. A Tripoli court sentenced him to death for those same crimes in 2015 when he appeared via videolink. He also denies war crimes.