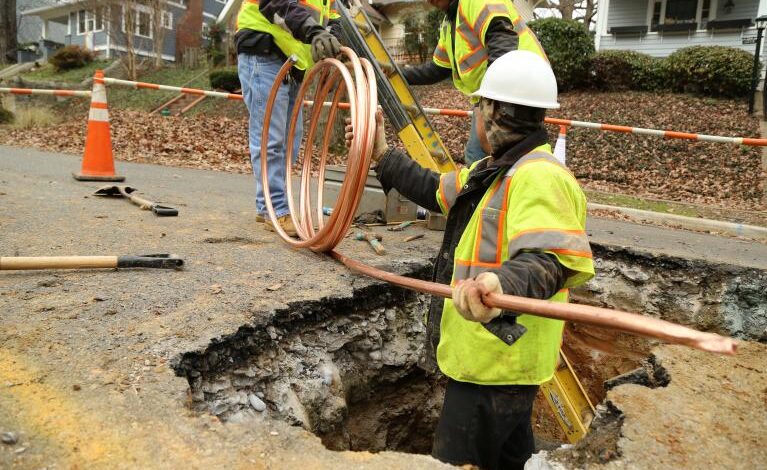 LANSING — This week, Governor Whitmer announced the state would be receiving federal money towards replacing lead service lines in the state, a badly needed project.

The funds are earmarked for water infrastructure and come from the newly-signed federal Infrastructure Investment and Jobs Act. Michigan is set to receive $10 billion over five years from the package.

Whitmer issued an executive directive to state departments and agencies to  collaborate with the legislature and begin  preparing the state to replace lead services lines and build up water infrastructure.

Whitmer’s executive directive directs state departments to take a range of actions to ensure that lead service lines are replaced ahead of schedule. This includes prioritizing in-state businesses and lead service line replacement for cities that have been “disproportionately burdened” by lead in their drinking water and communities that require financial or technical assistance to utilize water infrastructure dollars.

Lead exposure harms brain development in children and it causes both short and long-term health problems for adults. The leading causes of lead exposure are drinking water and paint. Nationally, around 9.2 million homes have lead pipes.

Under Michigan’s Lead and Copper Rule, the strictest nationwide, every community is required to replace 5 percent of its lead service line every year, meaning 100 percent replacement in 20 years.

However, any community experiencing an “action level exceedance” is required to replace its lines at a rate of 7 percent per year, meaning 100 percent completion in just under 15 years. The Department of Environment, Great Lakes and Energy (EGLE) deems any lead level over 15 parts per billion (ppb) to exceed its action level, which triggers additional actions, including, but not limited to, increased investigative sampling of water quality and educational outreach to customers in accordance with the Michigan Safe Drinking Water Act.

With additional federal funding from the Bipartisan Infrastructure Plan, Michigan hopes to speed up this timeline and fix and replace more water infrastructure, including lead pipes.

“From Flint to Benton Harbor to Hamtramck, there are increasing numbers of Michiganders without access to clean drinking water,” she said. “Families have come to me with tears in their eyes – wondering how we can protect their children from lead poisoning and ensure clean drinking water in their schools. It’s simple: We need to replace every single lead service line in Michigan.”

Little action on lead in Michigan

But lead in water is a longtime problem affecting Michigan. Though Flint made international news with its lead crisis — which affected some 90,000 residents — in recent years, through federally-mandated increased testing, other cities have realized their lead problems and the state has been slow to take action.

In the west Michigan city of Benton Harbor, the crisis came about in 2018 when testing revealed lead contamination of the city’s water at 22 ppb and some houses tested at a horrifying 800 ppb and above.

But the state waited till Oct. 6 to formally advise residents to switch from tap to bottled water, which it provided for daily needs like cooking.

In Hamtramck, testing revealed an average lead level of 17 ppb, with some houses testing much higher. The findings caused alarm throughout the city, with residents packing lines to receive water filters in the middle of busy work days.

The Hamtramck Review reported that the estimated cost to replace the city’s lead service lines is $55 million. It costs $10,500 to replace each lead line leading into a residence. Hamtramck has replaced 500 lines in the last two years and has 5,000 more lines to replace.

In Hamtramck, officials says lead was found in customer service lines, which can be attributed to the age of the homes and the use of lead in those pipes, not in the main water coming to Hamtramck and traveling through the city.

Even with this known existence of lead in people’s water, cities like Hamtramck and Benton Harbor were to undergo a 20-year pipe replacement plan under the state, while the lead persisted in residents’ drinking water. That plan was shortened to an 18-month plan for Benton Harbor after public outcry.

In Dearborn, where the median income sits much higher than Hamtramck and Benton Harbor, city officials have assured residents that tested water levels meet federal standards for safety.

The Michigan Department of Health and Human Services (MDHHS) recommends that any household with a child or pregnant woman use cold water and a certified lead filter to remove lead from their drinking water, especially when preparing baby formula. Look for filters that are tested and certified to NSF/ANSI Standard 53 for lead reduction. For filters to work properly, follow the manufacturer’s instructions. If a household has a child or pregnant woman and is not able to afford the cost of a lead filter, contact the Wayne County Health Department.

Water customers can have their service lines inspected or have their drinking water tested for lead by contacting the MDHHS Drinking Water Hotline for free water testing. Call the MDHHS at 844-934-1315.