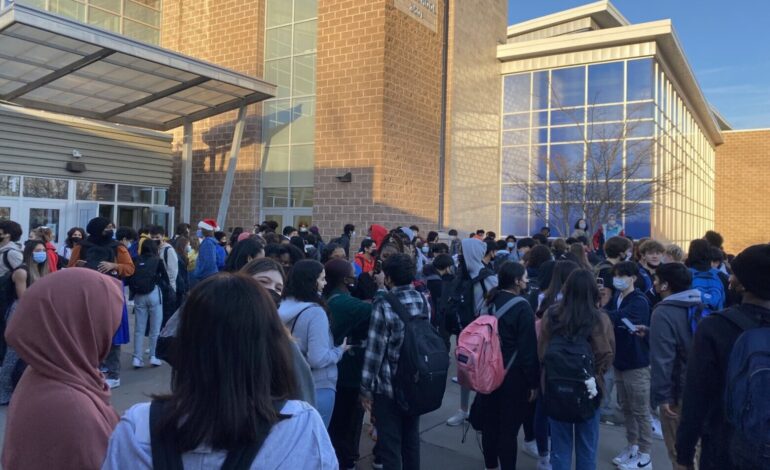 Hundreds of students from Fairfax Fax High School in Virginia walk out on Dec. 16 to demand the school take action after an Islamophobic attack on one of their schoolmates

Hundreds of Fairfax High School students in the town of Fairfax, Virginia walked out on Thursday and demanded their school take action following a disturbing attack on one their Muslim schoolmates by a fellow student.

On Tuesday, a boy reportedly pushed a Muslim girl to the ground, took off her Islamic head scarf or hijab and beat her up.

The boy also reportedly used racial slurs. He was reportedly not punished for the incident and allegedly continued threatening other students. A police spokesperson also told a local news outlet that the responding officer was not told of any assault and responded as a medical call for breathing complications experienced by the Muslim student.

On Thursday, in retaliation for the school’s lack of action about the incident, hundreds of students staged a walkout. A Change.org petition started by someone at the school says the school needs to take accountability for the incident.

The petition says “an ambulance was called into the school for a panic attack when they really should have been told this was an assault.”

It also says the victim “forever has this moment engraved in her mind and has “already returned to school with no consequences.”

“This is not right, this should have never happened and the school is covering this up,” the petition read.

The petition had generated close to 7,000 signatures as of late Thursday night.

Reagan Wise, a student at Fairfax High School, told WTOP News that “the guy who did it did not face any trouble and is currently still threatening other students.”

The victim told WUSA90 that after the attack she was punished and forced to be in the same room with her attacker after the incident for in-school suspension.

Fairfax police confirmed that roughly 350 students participated in the walk out.

The Council on American-Islamic Relations (CAIR), called on law enforcement authorities to launch a hate crime investigation into the alleged assault.

“It is the responsibility of administrators and educators to ensure the safety of all students, and by allowing the suspected assailant to return to school – where he reportedly threatened more students – they have failed in that duty,” said CAIR National Communications Director Ibrahim Hooper