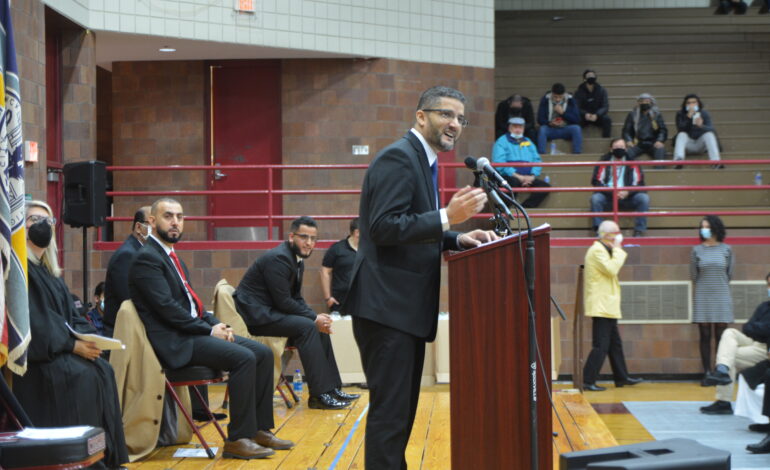 At the ceremony, 14-year-old Maria Saad, a Yemeni American student from Dearborn, sang the national anthem.

“As veteran of many of these ceremonies, I know how deeply meaningful and moving they are,” Majewski said.

The atmosphere definitely reflected that meaningfulness on Sunday, as a large crowd, many from the local Yemeni American community, gathered inside the city’s high school and community center to witness a historic inauguration of the first all-Muslim elected city government in the country.

“As a community we have become the exception to what was previously thought of as impossible,” Ghalib said as he stood on the stage at the school he graduated from some 20 years ago. As a community we have become the exception to what was previously thought of as impossible. — Hamtramck Mayor Amer Ghalib

Ghalib told the story of  a school adviser who discouraged him from his interest in political science studies in college due to his accent and an immigrant background, saying he didn’t have a future in politics.

Ghalib instead studied medicine and currently works in health care, but eventually returned to politics out of a passion for public service to his community.

Throughout his campaign, he has promised to work towards unity and healing in a city that has recently seen ideological division over such hot button topics as marijuana dispensaries and the flying of the gay pride flag at City Hall during pride month.

Hamtramck, which has a weak mayoral system in which the city manager conducts day-to-day business, also has economic challenges to deal with. This includes infrastructure problems of flooding and road repair, as well as a large police and fire retirement system obligation that the city is attempting to find creative ways to meet.