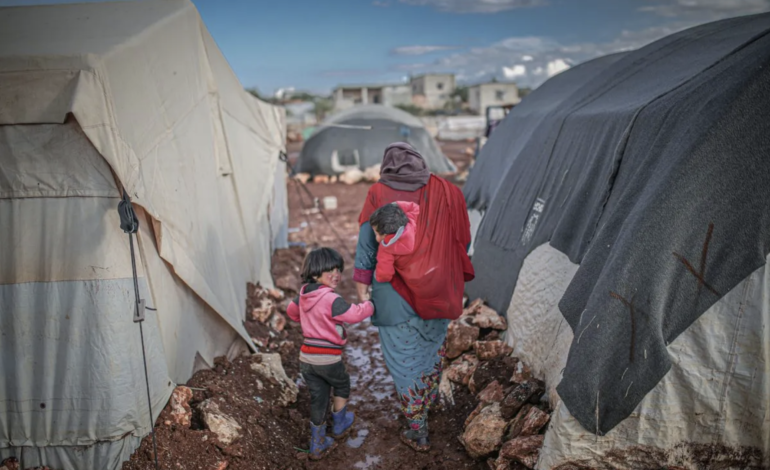 People walk in between makeshift tents at a refugee camp during winter in Idlib, Syria on December 18, 2021. Photo by Muhammed Said - Anadolu Agency

Although 2021 is now behind us, there are many issues that will linger for a while, or much longer, and will certainly dominate much of the news in 2022 as well. These are but a few of the issues.

Exasperated with NATO expansion and growing ambitions in the Black Sea region, Moscow has decided to challenge the U.S.-led Western alliance in an area of crucial geopolitical importance to Russia.

Ukraine’s quest for NATO membership, especially following the Crimea conflict in 2014, proved to be a red line for Russia. Starting in late 2021, the U.S. and its European allies began accusing Russia of amassing its forces at the Ukrainian border, suggesting that outright military invasion would soon follow. Russia denied such accusations, insisting that a military solution can be avoided if Russia’s geopolitical interests are respected.

Some analysts argue that Russia is seeking to “coerce the West to start the new Yalta talks”, a reference to a U.S., U.K. and Russia summit at the conclusion of World War II. If Russia achieves its objectives, NATO will no longer be able to exploit Russia’s fault lines throughout its Western borders.

While NATO members, especially the U.S., want to send a strong message to Russia — and China — that the defeat in Afghanistan will not affect their global prestige or tarnish their power, Russia is confident that it has enough political, economic, military and strategic cards that would allow it to eventually prevail.

Another global tussle is also underway. For years, the U.S. unleashed an open global war to curb China’s rise as a global economic power. While the 2019 “Trade War” instigated by the Donald Trump administration against China delivered lukewarm results, China’s ability to withstand pressure, control with mathematical precision the spread, within China, of the COVID-19 pandemic and continue to fuel the global economy has proved that Beijing is not easy prey.

An example of the above assertion is the anticipated revival of the Chinese tech giant, Huawei. The war on Huawei served as a microcosm of the larger war on China. British writer Tom Fowdy described this war as “blocking exports to (Huawei), isolating it from global chipmakers, forcing allies to ban its participation in their 5G networks, imposing criminal charges against it and kidnapping one of its senior executives.”

However, this is failing, according to Fowdy. 2022 is the year in which Huawei is expected to wage massive global investments that will allow it to overcome many of these obstacles and become self-sustaining in terms of the technologies required to fuel its operations worldwide.

Aside from Huawei, China plans to escalate its response to American pressures by expanding its manufacturing platforms, creating new markets and fortifying its alliances, especially with Moscow. A Chinese-Russian alliance is particularly important for Beijing as both countries are experiencing strong U.S.-Western pushback.

2022 is likely to be the year in which Russia and China, in the words of Beijing’s ambassador to Moscow, Zhang Hanhui, stage a “response to such overt (U.S.) hegemony and power politics”, where both “continue to deepen back-to-back strategic cooperation.”

The world “hanging by a thread”

However, other conflicts exist beyond politics and economy. There is also the war unleashed on our planet by those who favor profits over the welfare of future generations. While the Glasgow Climate Pact COP26 began with lofty promises in Scotland in November, it concluded with political compromises that hardly live up to the fact that, per the words of U.N. Secretary-General António Guterres, “we are still knocking on the door of climate catastrophe.”

True, in 2022 many tragedies will be attributed to climate change. However, it will also be a year in which millions of people around the world will continue to push for a collective, non-political response to the “climate catastrophe.” While Planet Earth is “hanging by a thread” — according to Guterres — political compromises that favor the rich become the obstacle, not the solution. Only a global movement of well-integrated civil societies worldwide can compel politicians to heed the wishes of the people.

The adverse effects of climate change can be felt in myriad ways that go beyond the immediate damage inflicted by erratic weather conditions. War, revolutions, endemic socio-economic inequalities, mass migration and refugee crises are a few examples of how climate change has destabilized many parts of the world and wrought pain and suffering to numerous communities worldwide.

The issue of migration and refugees will continue to pose a threat to global stability in 2022, since none of the root causes that forced millions of people to leave their homes in search of safer and better lives have been addressed. Instead of contending with the roots of the problem — climate change, military interventions, inequality, etc. — quite often the hapless refugees find themselves accused and demonized as agents of instability in Western societies.

This, in turn, has served as a political and, at times, moral justification for the rise of far-right political movements in Europe and elsewhere, which are spreading falsehoods, championing racism and undermining whatever semblance of democracy that exists in their countries.

2022 must not be allowed to be another year of pessimism.  It can also be a year of hope and promise. But that is only possible if we play our role as active citizens to bring about the coveted change that we would like to see in the world.