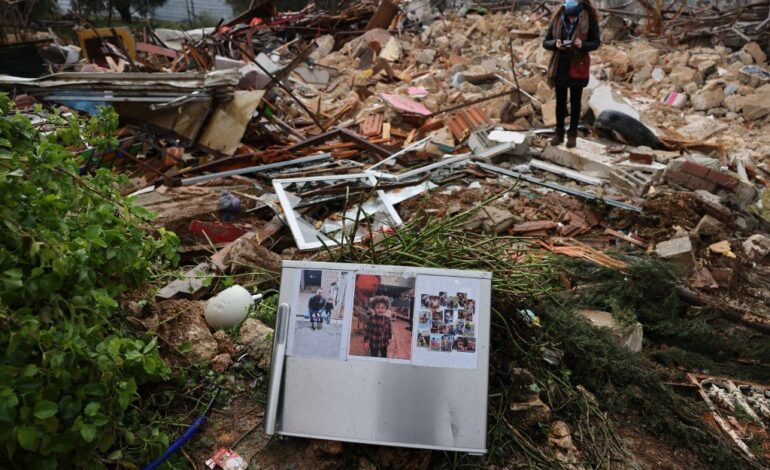 Family pictures are left on what remains of a fridge in the ruins of the Palestinian Salhiyeh family's house, demolished by Israeli forces, Jan. 19. Photo: AFP via Middle East Eye

After a multi-day standoff, Israeli authorities illegally removed a Palestinian family from their home in the Sheikh Jarrah neighborhood of occupied East Jerusalem and demolished it.

Resident Mahmoud Salhiyeh and members of his family took to the roof of the home to defend it on Monday and threatened to blow it up with gas canisters if they were forced out.

The family had lived in the home for several decades, much like dozens of families in the neighborhood that has come under an international spotlight over the last year as Israel intensified its push to remove Palestinians from their homes to make way for more Jewish settlers. The resulting resistance efforts by Palestinians were met by a weeks-long assault on Gaza by Israel, which killed hundreds of civilians and demolished downtown buildings.

BREAKING: Yasmin Salahiya reports that Israeli soldiers beat her 9-year-old little sister and aunt, who is now unable to move from her injuries, before destroying the family's home this morning.

A 10-year-old boy in the family was seen crying on the street in the pouring rain.

Salhiyeh, 50, lived on the property with two adjacent buildings, along with his wife and children, mother, his sister and her children.

All told, some 18 people, including children, are now homeless because of the illegal removal and demolition, which put the family out into the freezing night. Around 22 supporters who were camping inside the property in solidarity with the family were also assaulted and detained, the Middle East Eye said. Eyewitnesses told the WAFA news agency the Israeli forces cordoned off the entire Sheikh Jarrah area starting at 3 a.m., preventing anyone from reaching the house.

They then entered the Salhiyeh houses, beating everyone in their way and forcing them to leave the houses on a rainy and cold morning before Israeli bulldozers razed the two buildings.

Reuters reported that Salhiyeh family members and activists organized a vigil inside and on top of the building until armed police cleared the site before dawn on Wednesday.

My hands are shaking. This is what their home looks like now: The Salhiye family of 15, kicked out in this freezing weather from their home in Sheikh Jarrah. pic.twitter.com/B0ay1TBP7g

The demolished site sat across from the British Consulate in East Jerusalem, which said on Monday that evictions in occupied territory, in all but the most exceptional circumstances, were against international humanitarian law.

Israeli authorities had claimed they want to use the land for public service. The Jerusalem municipality said Israeli authorities were enforcing a court-approved eviction order of “illegal buildings built on grounds designated for a school.”

The Middle East Eye reported that the family had owned the house and lived in it for generations since they were expelled by Zionist militia from Ein Karem in 1948 during the Palestinian Nakba, or catastrophe, when some 750,000 Palestinians were violently displaced to create the state of Israel. Israeli forces remove a man on crutches away from the ruins of a Palestinian house they demolished in the Sheikh Jarrah neighborhood on Wednesday. Photo: Ahmad Gharabli/AFP

The U.N. Relief and Works Agency for Palestine in the Near East (UNRWA) condemned the home demolition and eviction of the family.

“Under international humanitarian law, forcible transfer of protected persons & destruction of property of private persons by Israel, as an occupying power, is forbidden, except when absolutely necessary for military reasons or the security of the population under occupation,” said the refugee agency in a tweet.

The Israeli apartheid government is completely out of control because the Biden administration is not holding it accountable for its escalating human rights abuses. — Nihad Awad, CAIR

Human Rights Watch (HRW) called the expulsion of the family and the destruction of their home a “war crime.”

The Council on American-Islamic Relations (CAIR), a U.S. based Muslim civil rights and advocacy organization, called on President Biden and the U.S. Department of State to “forcefully condemn the Israeli government’s ongoing campaign of ethnic cleansing of Sheikh Jarrah.” It also laid the blame on increasingly aggressive settler developments on the government’s inaction.

“The Israeli apartheid government is completely out of control because the Biden administration is not holding it accountable for its escalating human rights abuses,” said CAIR National Executive Director Nihad Awad. “Beating a Palestinian family, including a 9-year-old girl, and then bulldozing their home in the middle of the night is simply the latest human rights abuse committed under Israel’s far-right leader, a former settler who explicitly opposes the creation of a Palestinian state.

“It is long past time for our government to stop sending billions of American tax dollars overseas to support the racist oppression of Palestinian men, women and children,” Awad added. Ruins of the Salhiyeh family home, which was made up of two households of 18 members, including children. Photo: Zena Tahhan/Al Jazeera

The local Israeli municipal government in Jerusalem had long claimed rights over the property that the Salhiyeh family had bought and possessed for some 60 years. This culminated in an “eviction” order approved by an Israeli court against the family in 2017 when their land was allocated for school construction. The order followed 23 years in courts against the Israeli government, which issued an ultimatum in December for evaluation on January 25.

But as the Middle East Eye reported this week, Israel’s Jerusalem municipality said that the Salhiyehs have no right over the land that once belonged to the grand mufti of Jerusalem, Amin al-Husseini, and which Israel confiscated after it captured the city in 1967 according to the Absentee Property Law. Mahmoud Salhiyeh stands on the roof of his home with gas canisters, just before he and his family were due to be forcibly expelled, Sheikh Jarrah, East Jerusalem, Jan. 17. Photo: Oren Ziv/Activestills.org

Husseini, a prominent national leader prior to 1948, was the head of the British-founded Supreme Muslim Council in Jerusalem.

Salhiyeh, who is married to a Jewish woman, Lital, said that his family was expelled from Ein Karm village in West Jerusalem in 1948, lived in the area during Jordan rule and owned their land since before 1967.

Such land claims by the Israeli, or more specifically the Zionist settler colonial government and occupation in the area, are at the core of the violence seen in this particular quarter of Jerusalem.

Last year, leading up to the summer blood bath in Gaza, Israeli police and Jewish extremists meted out nightly raids and violence against Palestinians in devastated East Jerusalem neighborhoods. Backed by prominent local Israeli leadership, thousands of Jewish extremists also targeted Palestinian communities in Jerusalem’s Old City. Their objective is the removal of Palestinian families from their homes in the Sheikh Jarrah neighborhood.

As the violence brewed, The Palestinian Chronicle’s Ramzy Baroud offered a historical context to the claims over land long possessed by Palestinians made by Israeli settlers, many from far away places like Brooklyn, New York.

As Sheikh Jarrah gained Western media attention, Baroud pointed to the near-complete absence of any depth and context to the coverage, including the fact that Sheikh Jarrah is not the exception but the norm. Israeli security forces detain a Palestinian amid ongoing confrontations as Palestinian families face removal from their homes in the Sheikh Jarrah neighborhood of East Jerusalem, on May 4, 2021. Photo: Ahmad Gharabli/AFP

The legal basis of the Jewish settlers’ constant attempts to steal more Palestinian properties can be traced back to a specific 1970 law, known as the Legal and Administrative Matters Law, which allowed Jews to sue Palestinians for properties they claim to have owned prior to the establishment of Israel on the ruins of historic Palestine in 1948.

“While Palestinians are excluded from making similar claims about the properties from which they have been driven since 1948 — this is what apartheid looks like – Israeli courts have generously handed Palestinian homes, land and other assets to Jewish claimants,” Baroud wrote. “In turn, these homes, as in the case of Sheikh Jarrah and other Palestinian neighborhoods in East Jerusalem, are often sold to Jewish settler organizations to build yet more colonies on occupied Palestinian land.”

In February 2021, the Israeli Supreme Court awarded Jewish settlers the right to have Palestinian homes in Sheikh Jarrah.

After protests from Palestinians and international backlash, Israel offered Palestinians a “compromise.” They can give up ownership rights to their homes and in return continue to live there as tenants, paying rents to the same illegal Jewish settlers who have stolen their homes in the first place, but were now armed with a court judgment.

“However, the “logic” through which Jews claim Palestinian properties as their own should not be associated with a few extremist organizations,” Baroud clarified. “After all, the ethnic cleansing of Palestine in 1948 was not the work of a few extreme Zionists.

“Similarly, the illegal occupation of East Jerusalem, the West Bank and the Gaza Strip in 1967 and the massive settlement enterprise that followed was not the brainchild of a few extremist individuals. Colonialism in Israel was, and remains, a state-run project, which ultimately aims to achieve the same objective as that being carried out in Sheikh Jarrah: The ethnic cleansing of Palestine and Palestinians to ensure a Jewish demographic majority.”