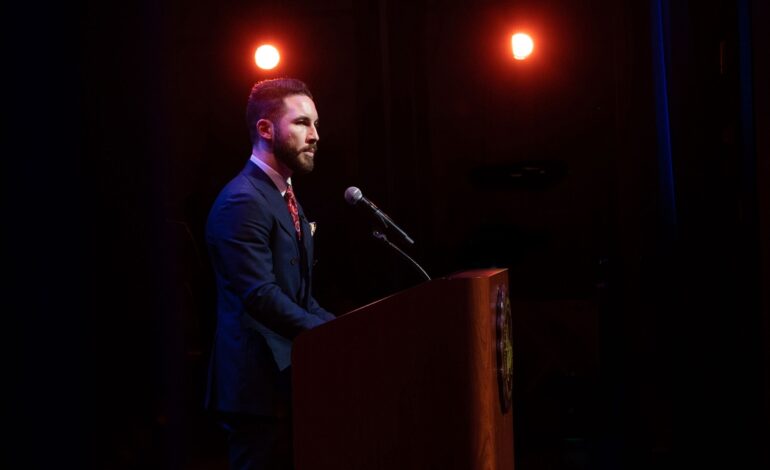 DEARBORN — On Jan. 15, Abdullah H. Hammoud took the oath of office with his wife by his side and was sworn in with a copy of his family’s Quran.

The ceremony also included the swearing in of all seven City Council members, Clerk George Darany and all nine members of the Charter Revision Commission.

After the ceremony, Hammoud quoted the late U.S. Rep. John Dingell, who represented Dearborn for decades.

“As I think about the work ahead of us, I remember the words of the late Congressman John Dingell in his final address to the public,” Hammoud said. “He said, ‘elected officials do not have power. They hold power — in trust for the people who elected them.’”

He also promised the residents that he’ll work for all corners of the city.

“Everything we do will begin with that basic truth, that the people of Dearborn have ultimate power, that their trust must be earned rather than granted,” he said. “Having devoted my life to public service, I know that there is more wisdom in the public we serve than any elected official can dream of. All four corners of our city bring something special that makes Dearborn the rich and vibrant place we all love and call home.”

The event was livestreamed from the Ford Community and Performing Arts Center, with only the dignitaries and their direct families in attendance due to the rise in COVID-19 cases. The ceremony also included a video tribute to former Mayor Jack O’Reilly Jr.

Wayne County Circuit Judge Helal Farhat performed the swearing in for all of the elected officials. All officials were sworn in privately before taking office on Jan. 1.