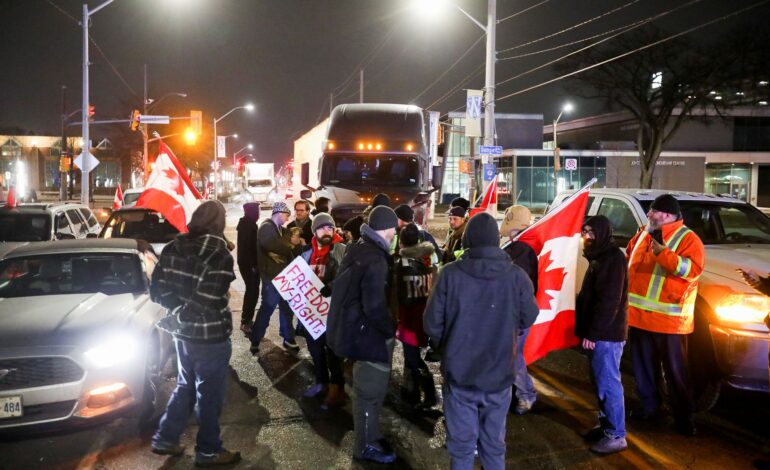 Protesters block the last entrance to the Ambassador Bridge, which connects Detroit and Windsor, effectively shutting it down as truckers and their supporters continue to protest against the COVID-19 vaccine mandates, in Windsor, Canada, Feb. 9. Photo: Carlos Osorio/Reuters

LANSING — Governor Whitmer is urging Canadian authorities to resolve a multi-day Ambassador Bridge closure so manufacturing and agriculture in the Midwest can continue humming along.

Protests over Canada’s COVID-19 vaccine mandates spread from Ottawa to Windsor, which led to protesters blocking traffic from accessing the bridge for a fourth day on Thursday. Though traffic from Windsor was open, traffic coming from Detroit remained closed.

Michigan wants to quickly resolve the ongoing closure and says it has impacted the state’s economy, including key sectors like autos, agriculture, manufacturing and more. The closure forced Ford, GM, Toyota and Honda to shut down plants or otherwise scale back production on both sides of the U.S. border.

“My message is simple: Reopen traffic on the bridge,” Whitmer said in a press release. “In Michigan, our economy continues to grow because of our hardworking people and innovative small businesses. Now, that momentum is at risk. Commercial traffic is at a standstill at the Ambassador Bridge and heavily backed up at the Blue Water Bridge.”

Calling themselves “the Freedom Convoy”, the group of  about 100 protesters, mostly in pickup trucks, are blocking the bridge at the base in Windsor. They are calling on Prime Minister Justin Trudeau to remove the measures like proof of vaccination for truckers, and for people to enter restaurants, gyms, movie theaters and sporting events.

The Canadian Trucking Alliance said Thursday that the protests are not peaceful and many of the vehicles and people involved in the protest are not heavy trucks or people in the trucking industry.

Protesters in Ottawa earlier told Reuters they had lost jobs or had trouble finding work because they were not vaccinated and spoke about losing their right to autonomy.

Wire reports say Facebook groups encompassing roughly a half-million members are being used to drum up support for the Canadian protests or plan similar ones in the U.S. and Europe. The U.S. Department of Homeland Security issued a bulletin to local and state law enforcement agencies on reports that some truckers are planning to “potentially block roads in major metropolitan cities” in a protest against vaccine mandates and other issues.

Such a convoy could begin in Southern California as early as this weekend, possibly disrupting traffic around the Super Bowl, and reach Washington in March in time for the State of the Union address, the Associated Press said. Vehicles block the route leading from the Ambassador Bridge, linking Detroit and Windsor, as truckers and their supporters continue to protest against the COVID-19 vaccine mandates, in Windsor, Canada Feb. 8. Photo: Carlos Osorio/Reuters

Our communities and automotive, manufacturing and agriculture businesses are feeling the effects. It’s hitting paychecks and production lines. That is unacceptable. — Governor Whitmer

Whitmer said the blockade is having a significant impact on Michigan’s working families, “who are just trying to do their jobs”, and that communities and automotive, manufacturing and agriculture businesses are feeling the effects.

She said the closure is hitting paychecks and production lines.

“That is unacceptable,” Whitmer said.

The Ambassador Bridge is the busiest land border crossing in North America. Tens of thousands of commuters and truck drivers carrying hundreds of millions of dollars of goods cross it every day. Countless Michiganders rely on this daily flow of goods and people across the border.

“It is imperative that Canadian local, provincial and national governments de-escalate this economic blockade,” Whitmer said. “They must take all necessary and appropriate steps to immediately and safely reopen traffic so we can continue growing our economy, supporting good-paying jobs and lowering costs for families.”

The protests caused the blockade in Windsor on Monday. Mayor Drew Dilkens earlier said some protesters are are willing to die for their cause.

“We don’t want anyone to get hurt,” Dilkens said, as reported by WXYZ. “We are trying to find a sensible and reasonable way through this and what we don’t want is to flush out 150 protesters and have 300 show up two days from now.”

On Wednesday, the closure of exit ramps to Ambassador on I-75 in Detroit forced traffic to be rerouted to the Blue Water Bridge, a twin-span border crossing, causing back ups.

“We need to reopen the bridge now, it’s as simple as that. I support the right to protest, but we can do so without impacting our economy and our workers in Michigan and beyond,” said U.S. Rep. Debbie Dingell (D-Dearborn). “Hardworking Michigan families are feeling the brunt of this border closure, and the blockade is further delaying manufacturing – especially in the auto industry – in the United States.

“This closure is impacting daily lives, forcing workers to stay home and miss paychecks, halting production at auto plants and preventing the critical flow of goods between Michigan and Ontario. We need Canadian authorities to get this bridge back up and running immediately so Michigan’s vibrant economy can return to normal and support hardworking families.”