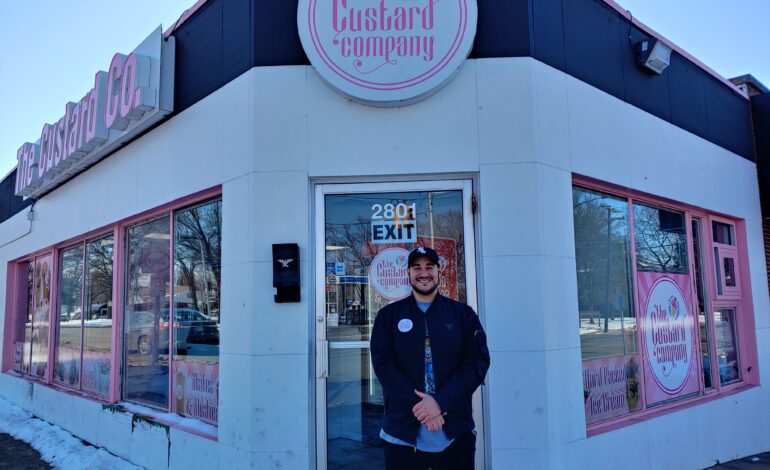 DEARBORN — The Custard Company, located at the corner of Monroe St. and Outer Drive in Dearborn, is recovering again after a second accident.

Jamal Jawad, 32, bought the former pizza business three years ago and turned it into a specialty ice cream shop known for items such as The Sweet Bun, The Wowffle and their Injected Loaded Cones.

Jawad grew up nearby and with his father having owned the gas station across the street for 32 years, their family frequented the former pizza shop and knew that it was popular and a good area.

The Custard Company is Jawad’s first business as he is a software engineer at Ford.

“My family owns businesses, gas stations, oil change and mechanic shops,” he said. “Honestly, being here, I always knew the area needed it. There’s really no ice cream in the area and I thought frozen custard would be perfect. My dad had wanted me to keep it a pizzeria, but that is a lot of work. But I could learn the ice cream easier and the only place that had frozen custard in Dearborn was Greenfield Village.” Photo of the July 10, 2021 accident at The Custard Company. Photo: Jamal Jawad

On July 10, any business owner’s worst fears came true, when, at 5 p.m., with customers in the store, a vehicle ran the red light at Monroe and instead of turning, continued straight and crashed into the building. The damage was luckily lessened by a metal bench outside of the building.

Neither the driver nor the customers or employees were hurt and Jawad was able to regroup and continue on with the business throughout the rest of the summer months.

As one of the few ice cream shops open year-round, The Custard Company has continued serving customers throughout the fall and winter as well, but on Jan. 26, it happened again. Photo of the Jan. 26 accident at The Custard Company. Photo: Jamal Jawad

At around 8:30 a.m., Jawad received a notification that it looked like someone may have broken into the building, but when he checked cameras and police were notified it was discovered that yet another vehicle had crashed into the building, this time on the Outer Drive side of the building.

This driver had also run the red light as the “sun was in their eyes” and they were T-boned, which caused them to lose control and end up in The Custard Company’s window. No one was injured in this incident, either.

In the 32 years that Jawad’s father owned the gas station across the street, there were never any vehicles that crashed into that building, and now Jawad is struggling to find contractors to repair the damage.

“I need someone to replace the cement blocks,” he said. “Trying to find someone to replace the sheet metal is really difficult because not many people do that anymore, but I really want to keep the original feel. I’m also working on getting the window reframed once it comes in and I’m looking into getting the cement barrier flower planters to put around the building as an added layer of protection.” Photo of the Jan. 26 accident at The Custard Company. Photo: Jamal Jawad

Jawad said that while this happening twice is a concern, he believes that Dearborn Police Chief Issa Shahin’s public safety plan will help tremendously.

“We’re still fun and we’re still safe,” he said. “We want the residents and the kids and families to still come and enjoy the experience. It is concerning that it has happened twice, but the city is working with us to keep it safe as they know how rare it is to happen twice and they know how busy we get. You don’t think, as a business owner, of a car crashing through it once, let alone twice in six months. I think Chief Shahin’s plan will help for sure by keeping people aware and ensuring safe drivers in Dearborn. We don’t want anyone to have a bad experience here”

With everything made homemade besides the waffles and new flavors added frequently, Jawad said he hopes that young entrepreneurs in the community continue to believe in themselves and follow their dreams.

“It’s a lot of work,” he said. “But if you put the time and effort into whatever you’re trying to do, you can do it. If I can do it with two jobs and two kids, anyone can do it.”