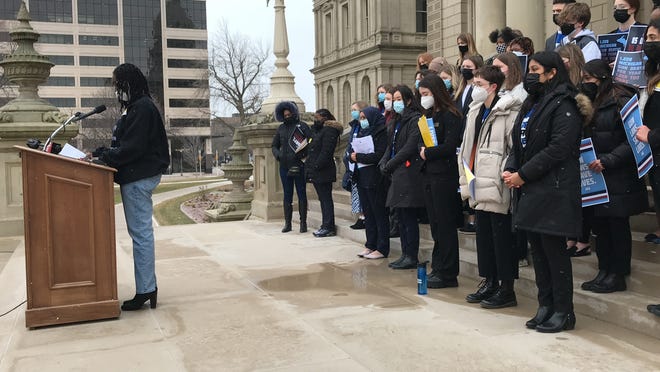 Zoe Touray, a senior at Oxford High School, speaks at the State Capitol with March for Our Lives. Photo: Beth LeBlanc/The Detroit News

LANSING — Students from across the state joined March For Our Lives, a national youth-led movement to end gun violence, at the State Capitol on Wednesday.

The group was lobbying lawmakers for changes to state law to decrease gun violence in Michigan. The primary proposals the students supported were safe gun storage laws in homes where minors are present, which was introduced in the House and Senate in June, and increased funding for mental health resources in schools, as proposed by Governor Whitmer’s budget recommendation earlier this month.

The push had a lot to do with the Oxford High School shooting on Nov. 30 when 15-year-old Ethan Crumbley opened fire, killing four classmates and wounding seven other people, including one teacher.

Zoe Touray, a student at Oxford High School, spoke at the event, describing how she remembered texting her mother that she loved her while she was locked inside of her classroom.

“We shouldn’t have had to bury friends, classmates, girlfriends, boyfriends,” she said. “No 15-year-old should have access to a gun and enter a school with one.”

As Crumbley’s parents, James and Jennifer Crumbley, are also charged in the case, advocates urge that the Oxford shooting may have been prevented had the gun been more secure and not, as prosecutors say, bought for Crumbley as a “Christmas present.”

Last week, Reina St. Juliana, a junior at Oxford High School and the older sister of shooting victim Hana St. Juliana, voiced support for the legislation that would require guns to be safely stored in a secure lockbox or locked with a locking device to prevent access by a minor.

Whitmer said she supported the efforts of March for Our Lives Michigan.

“I proposed unprecedented investments in mental health and school safety and today I’m reiterating my support for safe firearm storage, because one death is one too many,” she said on Wednesday. “I’ll work with anyone to save lives.”