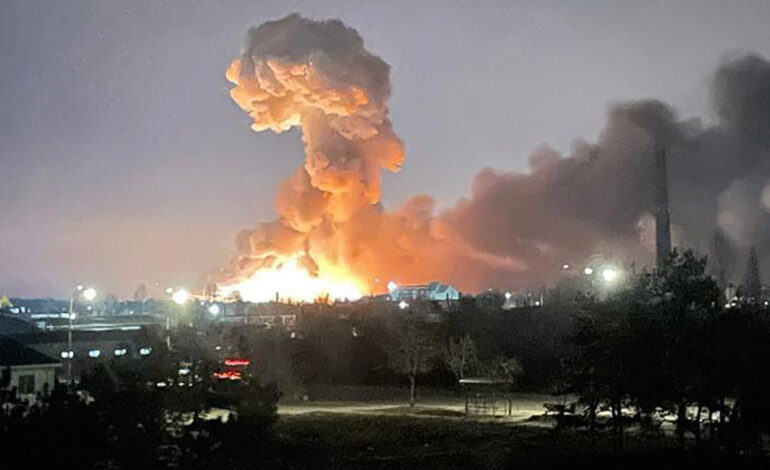 News of Russia’s invasion of Ukraine on Thursday shored up global anxieties over a conflict that has the potential to drag in regional powers and the U.S., marking the biggest attack by one state against another in Europe since World War Two.

The invasion began Thursday morning with attacks by land, sea and air, with missiles raining down on Ukraine’s capital, Kyiv, a city of 3 million people, before dawn Thursday.

Ukrainian forces battled Russian invaders on three sides on Thursday after Moscow mounted its assault across the country.

By nightfall, a picture was emerging of fierce fighting across multiple fronts. An adviser to the Ukrainian presidential office said Russian forces had captured the Chernobyl nuclear power plant. Heavy exchanges of fire were also taking place in the regions of Sumy and Kharkiv in the northeast and Kherson and Odessa in the south.

At least 70 people were reported killed by late Thursday, with a total death toll of 137 military personnel and civilians, with hundreds wounded. The U.N. refugee agency said an estimated 100,000 Ukrainians had fled their homes. Thousands were crossing into neighboring countries, including Romania, Moldova, Poland and Hungary.

Ukraine’s military said it had destroyed four Russian tanks on a road near Kharkiv, killed 50 troops near a town in the Luhansk region and downed six Russian warplanes in the east. Firefighters work at the site of a damaged residential building after Russia launched a massive military operation against Ukraine, in Kyiv, Ukraine, Feb. 25. Screengrab: Ukrainian Ministry of Emergencies/via Reuters

Ukraine’s President Volodymyr Zelenskiy called on Ukrainians to defend their country and said arms would be given to anyone prepared to fight.

“What we have heard today are not just missile blasts, fighting and the rumble of aircraft,” Zelenskiy said. “This is the sound of a new Iron Curtain, which has come down and is closing Russia off from the civilized world,”

The Ukrainian parliament approved a declaration of a state of emergency in the entire country on Feb 23, except for two eastern regions where it had already been in place since 2014, after Russian President Putin ordered the deployment of troops to the two breakaway regions after recognizing them as independent.

On Feb. 10, Russia held military exercises in Belarus and the Black Sea following the buildup of its forces near Ukraine.

Russia’s influence looms large in Ukraine, particularly in the urban, industrial east where Russian is the predominant language in many districts along the Ukrainian border as well as in Crimea in the south. Roughly 44 million people live in Ukraine. Russian-backed separatists in the Donetsk and Luhansk regions — collectively known as the Donbass — broke away from Ukrainian government control in 2014 and proclaimed themselves independent “people’s republics”, until now unrecognized.

Since then, Ukraine says about 15,000 people have been killed in the fighting. Russia denies being a party to the conflict, but has backed the separatists in numerous ways, including through covert military support, financial aid, supplies of COVID-19 vaccines and the issuing of at least 800,000 Russian passports to residents. Moscow has always denied planning to invade Ukraine.

So far, the U.S. and other NATO members have sent military aid to Ukraine, but there is no move to send troops for fear of sparking a wider European conflict.

With news of the invasion, stock markets around the world slumped. The S&P 500 was off 1.2 percent and the Nasdaq was off 0.35 percent. Investors shifted money into safe havens like U.S. Treasuries and gold. Wall Street’s fear gauge, the VIX, jumped to its highest in a month.

The U.S. took unprecedented action in response to the invasion by imposing severe economic sanctions that it said will have both immediate and long-term effects on the Russian economy and financial system. This included restrictions on the top 10 Russian financial institutions and with the U.S. Treasury Department saying it was ready to “impose additional major costs.”

In his address to the nation about the invasion, President Biden said Putin bore the full responsibility for attacking Ukraine and said Russia will face the consequences because of it. President Biden speaks about the Russian invasion of Ukraine in the East Room of the White House, in Washington D,C., Thursday, Feb. 24. Photo:Alex Brandon/AP

He said he had “no plans to talk” with Putin. Biden has expressed a total breakdown of diplomatic relations between the two nuclear powers.

“Putin’s aggression against Ukraine will end up costing Russia dearly economically and strategically,” Biden said, adding, “Putin will be a pariah on the international stage. Putin’s choice to make a totally unjustifiable war on Ukraine will have left Russia weaker and the rest of the world stronger.”

Biden said he believed Putin to have larger ambitions than Ukraine.

“He wants to, in fact, reestablish the former Soviet Union,” Biden said.

Biden said as the U.S. responds to the invasion he will try “to limit the pain the American people are feeling at the gas pump” as well. He said he knows that gas prices have already been rising in the U.S.

Experts fear that gas prices could rise five to 10 cents per gallon over the next week, and hit $3.75 in the next 15 to 20 days. The current Russia situation, coupled with warmer temperatures and a recovering economy could have the national average topping four bucks a gallon by April, Patrick De Haan, an oil and gas analyst at GasBuddy, told CBS MoneyWatch.

Russia is one of the biggest oil and gas producers in the world and has withheld crude oil when backed into a corner before. Vox reported that earlier in February, JPMorgan analysts projected that disruptions to oil flows from Russia could push oil prices to $120 per barrel, compared to oil was priced in the $60 per barrel range a year ago, and started 2020 in the $70s and $80s.

Russia delayed shipments of natural gas last fall when Germans delayed the approval of the Nord Stream 2 pipeline from Russia to Europe.

The average national price of gas is already up to $3.54 a gallon compared to $2.66 a year ago. That number could climb even higher, especially as the summer months approach, which will put more people on the road.

“The invasion of Ukraine is an unjustifiable violation of international law and we need an immediate diplomatic solution that ends hostilities and protects innocent lives,” said U.S. Rep. Rashida Tlaib (D-Detroit). “We must be laser focused on protecting the millions of innocent lives in Ukraine that are now under unconscionable threat from Putin’s violent aggression.

“Sanctions should target Russian leaders and oligarchs, not civilians, as we seek to end this horrible war without further bloodshed, and the U.S. should also be prepared to assist with protecting and sheltering refugees.”

On Thursday, Iranian President Ebrahim Raisi told Putin in a phone call that NATO’s expansion was a “serious threat” to the region’s security and stability, the semi-official Nour News reported.

“NATO’s expansion eastward creates tension and is a serious threat to the stability and security of independent states in various areas,” Raisi was quoted saying following Russia’s military attack on Ukraine, adding, “I hope what is happening will benefit peoples and the entire region.”