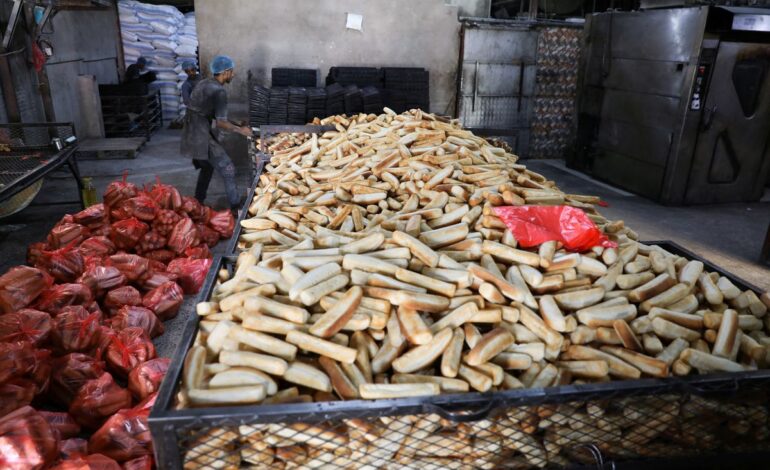 SANAA — Potential disruption to global wheat supplies after Russia’s invasion of Ukraine is raising concerns that war-torn Yemen’s hunger crisis and food price inflation could deepen, with some Yemenis rushing to buy flour.

The World Food Program (WFP) said this week that the Ukraine crisis is likely to further increase fuel and food prices, especially grains, in import-dependent Yemen where food costs have more than doubled in many areas in the past year.

Russia and Ukraine account for about 29 percent of global wheat exports and interruption to that flow is pushing up global prices.

Conflict and inflation in Yemen have pushed millions to the brink of famine.

“People are now rushing to purchase, people are on alert, anticipating a crisis,” said wholesaler Mohammed al-Nimri in Yemen’s capital Sanaa. “They are taking, 10, 20 sacks.” A worker carries a sack of wheat flour outside a wholesale food shop in Sanaa, Yemen February 28. – Photo: Reuters

Flour importer Mahran Al-Qadi said they had stocks, but people were panic buying. “Some merchants have even raised prices after seeing the great demand.”

Seven years of conflict have divided Yemen between an internationally recognized government in the southern city of Aden and the Iran-aligned Houthi group in Sanaa.

On Tuesday, the Aden government held a meeting on food supplies and said there were four months of wheat and other basic goods stocks.

The Houthis’ deputy industry minister, Muhammad al-Hashemi, told Reuters the administration had several months of wheat stocks and more were coming from outside Ukraine and Russia.

Concerns about supplies come on top of a deteriorating hunger situation in Yemen and amid a shortfall in aid funding.

The WFP has since January cut rations for 8 million of the 13 million people it feeds a month, with warnings of more cuts.

“We have no choice but to take food from the hungry to feed the starving,” WFP head David Beasley said.

Sweden and Switzerland will co-host a donor conference on March 16 to fund the U.N.’s 2022 Humanitarian Response Plan, which in 2021 was only 58 percent funded.