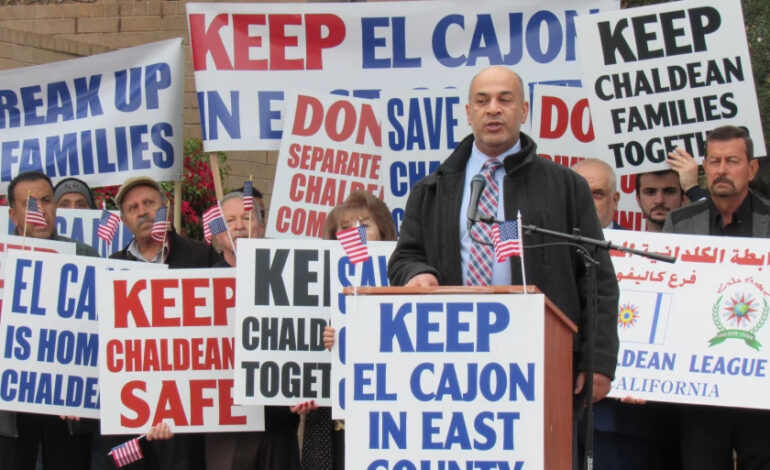 SAN DIEGO — San Diego County’s deep rooted Chaldean community says it is being disenfranchised by the County’s redistricting of the area in which most of this ethnic and religious minority group resides.

A group representing the concentrated Chaldean community in the East County has said the county’s redistricting efforts have resulted in a discriminatory division of the community. In response to the “illegal division of the close-knit community between two supervisorial districts”, the Chaldean Coalition filed a lawsuit on March 4 in California Superior Court.

The lawsuit is filed against the County of San Diego, its Independent Redistricting Commission and its Registrar of Voters.

“Chaldeans are a religious and ethnic minority group who fled persecution in Iraq only to face new political persecution in San Diego,” the lawsuit reads. “The County of San Diego Redistricting Commission, in drawing the County’s new Supervisorial district boundaries, split the Chaldean community living in East County right down the middle.”

In California, supervisors represent their district on boards that oversee most county departments and programs and annually approve their budgets, supervises the official conduct of county officers and employees, controls all county property and appropriates and spends money on programs that meet county residents’ needs.

The case for the Chaldean community is being handled by attorneys from LiMandri & Jonna LLP. They say that the county’s redistricting efforts and resulting maps are illegal under the California Election Code, which itself incorporates other state and federal statutory and constitutional laws.

The Chaldean Coalition seeks a stay, and preliminary and permanent injunctions, restraining application of the County of San Diego Supervisorial Districts and requiring the redrawing of the maps in compliance with the law.

“The process of drawing representative district boundaries, whether at the federal Congressional level, the State Assembly and Senate level or the County Supervisorial level, has a very clear requirement laid out by the California Supreme Court,” said attorney-partner Paul M. Jonna. “The district boundaries may not be drawn in a way that splits up a racial minority group — whether intentionally or otherwise.

“Yet that is exactly what has happened here. The County of San Diego Redistricting Commission, in drawing the county’s new supervisorial district boundaries, split the Chaldean religious and ethnic group living in East County right down the middle.”

The lawsuit says the redistricting violates the “communities of interest” provisions in the state’s election code, which bake into the redistricting process the Equal Protection guarantees of the California Constitution.

It says the the commission abused its discretion by acting contrary to law by intentionally diluting the influence and voice of the Chaldean community, in favor of local Black activist group’s demands to recognize a newly emerging category.

“The Commission chose to prioritize the ‘BIPOC community’ (Black, Indigenous, People of Color), a recent political term popularized by Black Lives Matter meant to highlight White supremacy in the U.S., over an actual, constitutionally protected religious and ethnic minority community that has established roots and a deep history in East County,” Jonna said. “This was done at the behest of PANA — a newly founded nonprofit also funded by Black Lives Matter — whose clear goal was to break up the Chaldean community and dilute their vote. This is likely because Chaldeans traditionally vote overwhelmingly conservative.”

“The new maps exacerbate the inequality of population between the two districts and create a non-compact district that now has another district jutting into it,” Jonna said. “But this is not the only aspect of the process that lacked rationality: Various Commission members were clearly disqualified from sitting on the Commission, whether because they had recently run for political office or were registered lobbyists.”

In that decade, the president of Iraq tried to force Chaldeans to give up the Chaldean-Aramaic language, passing laws prohibiting its teaching in public schools, and tried to forcibly impose Arabic instead. These policies are said to have begun the Chaldean diaspora.

“This case is not about political parties,” said Vince Kattoula, president of the Chaldean Coalition. “This is about ensuring that all ethnic minority communities, including the Chaldean community, which have worked so hard to find a voice in the United States, are protected, respected and heard.”

According to the Brennan Center for Justice, as of March 2, a total of 54 cases have been filed challenging congressional and legislative maps in 21 U.S. states as racially discriminatory or otherwise based on partisan gerry­manders. Courts in Alaska, North Carolina and Ohio have actually sent down orders for commissions to redraw certain maps.

Though the maps are expected to go into effect later this month, it could take months for legal issues to be resolved. And there could be more legal challenges in the next few years as well. As of March 2, a total of 54 cases have been filed challenging congressional and legislative maps in 21 U.S. states as racially discriminatory or otherwise based on partisan gerry­manders.

Those lawsuits do bring up the “communities of interest” categories as something being violated by new local district maps. One of those lawsuits come from Black Democratic officials arguing that local maps disenfranchise Black voters and even violate the federal Voting Rights Act. Another comes from West Michigan Republicans, alleging maps unnecessarily split up communities and more.

So far, the Michigan Supreme Court has dismissed the lawsuit by the Black lawmakers and a panel of appellate judges dismissed one part of the Republican lawsuit that says district maps on the west side of the state failed to honor communities of interest.

Three new State House districts cover the Dearborn, Dearborn Heights and neighboring Detroit and Wayne County communities where Arab American concentrations are present. Local activists have said the new maps dilute Arab voting power by absorbing those neighborhoods into districts with Whites and other populations. An election in November will decide who represents those areas in the state’s legislature starting next year.

In many states, citizen-led redistricting commissions have popped in order to counter decades-long partisan practices of creating representative maps to favor parties in elections, otherwise known as gerrymandering. But these cases in California and Michigan show how matters become complicated when the redistricting process results in pitting various ethnic and economic communities against each other in a struggle for local representation.