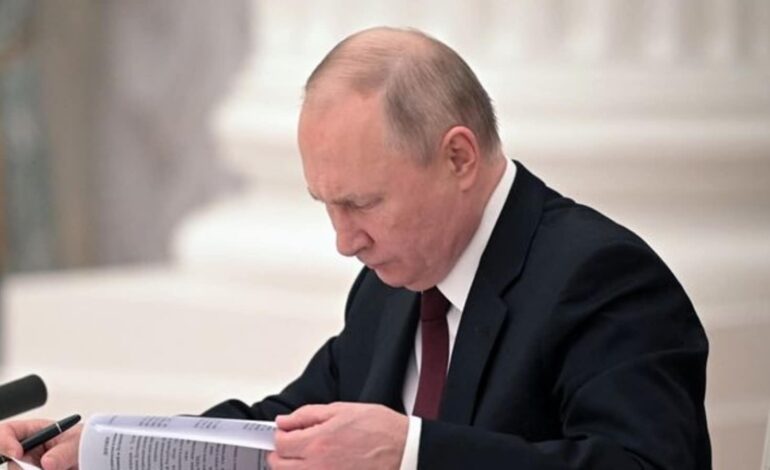 I’ve been thinking about the similarities between this moment and the moment after 9/11. In both cases, foreign attacks provoked fierce American outrage. After 9/11, that righteous indignation constricted public debate. I’m not even talking about the debate over invading Iraq. Think back to the debate over invading Afghanistan. Because the Taliban was so odious, because it deserved to be overthrown, Americans found it extremely difficult to question the wisdom of doing so. No one wanted to be accused of despising the Taliban less than everyone else. So not enough people (myself included) asked hard questions about America’s strategy. In this moment of justified fury at Vladimir Putin, I fear that’s happening again today.

Back to Ukraine and American strategy. In the U.S. today, there’s a consensus that Russia has done something horrifying, which the U.S. must oppose. There’s another consensus that the U.S. must not fight Russia directly, since that would risk world war, although politicians and pundits differ about how much the U.S. can aid Ukraine militarily before becoming a combatant. Because Americans overwhelmingly support these first two propositions, they overwhelmingly support economic sanctions, which provide a way of opposing Russia’s invasion short of war. Emotionally, sanctions are satisfying: They provide a comparatively low-cost way to express your revulsion at what Putin has done. But strategically, something very strange is happening: the Biden administration hasn’t explained what the sanctions are designed to achieve. And if they’re designed to convince Russians to turn against Putin — as many American commentators hope — most sanctions experts, and most Russia experts, say they will fail.

To be clear, I think there are good reasons to impose sweeping sanctions right now. For one thing, as Daniel Drezner has pointed out, the U.S. threatened to impose them if Russia invaded and would thus discredit itself if it didn’t follow through. The extremely harsh sanctions imposed by the U.S. and its allies may also make future aggressors think twice, which is good. They may also limit the resources Putin has to bludgeon Ukraine, which is even better.

But what end goal are they designed to achieve? What would have to happen for Biden to lift them? I have no idea. I’ve read the statements the Biden administration issued when it removed Russia from the SWIFT financial network on February 26, when it banned the import of Russian oil on March 8 and when it asked Congress to ban imports of other Russian goods, like seafood, vodka and diamonds, on March 11. Those statements don’t answer this question at all. And it’s not just Biden. As the political scientists Erik Sand and Suzanne Freeman observed in a terrific recent essay, “No Western leader has announced conditions under which sanctions might end.”

This is a problem. It’s a problem, for starters, because sanctions that hurt innocent people are evil. In this current, extraordinary moment, they’re a necessary evil. But they’re still evil and should stop the moment they’re not absolutely necessary. Because of international sanctions, Russians who played no role in launching this war are seeing the value of their life savings plummet; prices for bread and other staples are rising dramatically and people are lining up for hours to withdraw cash at ATMs. And economic conditions will almost certainly get worse. A 2019 study in the Journal of Development Studies found that, on average, sanctions reduce life expectancy in a targeted country between 0.5 and 1.5 years, depending on their type.

And the sanctions targeting Russians won’t only hurt Russians. As the Washington Post recently noted, sanctions and boycotts are already disrupting Russian exports of food and fertilizer, which along with the war itself are fueling a growing food crisis in the mostly poor countries that import Russian and Ukrainian agriculture. If the U.S. were bombing Russia in response to Putin’s invasion, Americans would find it easier to grasp the harm we’re doing. But the sanctions America has imposed are in some ways worse than bombs because they’re more indiscriminate. Which is why it’s crucial that Biden lay out the conditions for their eventual repeal.

Imposing sanctions is less bad than going to war or doing nothing at all. But the way many Americans talk about sanctions exaggerates their effectiveness and ignores their cost. And over the last few decades this has contributed to a sanctions addiction that has harmed both the U.S. and the world.

A second problem with failing to explain when U.S. sanctions will end is that Putin may conclude they won’t end until he’s deposed. That wouldn’t be a crazy conclusion on his part. Democratic House Intelligence Committee Chair Adam Schiff recently suggested that the U.S. should “continue to escalate the price” Putin pays “until he feels that his own regime is at risk.” And, historically, the U.S. has proved reluctant to lift sanctions when a regime it dislikes remains in power. The U.S. embargo against Cuba has been in place since 1962. The 2015 Iran nuclear deal constituted one of the few times in recent history when the U.S. tried to lift some sanctions absent a change in regime. But that didn’t work out very well. When Obama was president, many international banks refused to resume business with Tehran because they feared Obama’s successors would reimpose sanctions. Which, of course, is what Donald Trump did.

Levying sanctions until Russians topple Putin is a very bad idea. It’s a bad idea because people who know something about either sanctions or Russia tell us it won’t work. As the political scientists Dursun Peksen and Cooper Drury have noted, sanctions often “inadvertently help the targeted regime consolidate authoritarian power by enabling elites to enhance their ties with the key political supporters while at the same time economically disrupting its opposition groups.” The economist Jeffrey Sachs recently observed that sanctions helped sink Venezuela’s per capita GDP by more than 60 percent between 2017 and 2021, yet the country’s dictator, Nicolas Maduro, remains in power.

And in the case of Russia, in particular, one expert after another has explained that the oligarchs around Putin are either too weak, or too invested in him staying in power, to launch a coup. As The New Yorker’s Masha Gessen recently reminded Ezra Klein, the U.S. has sanctioned Russia’s government repeatedly before. The claim that sanctions will “motivate the elites or the masses to coalesce and protest and overthrow Putin,” she argues, “is wrong. It is demonstrably wrong. It’s been tried over and over and it doesn’t work.”

It’s not just that sanctions aren’t likely to bring about regime change. The effort itself is dangerous because the more Putin concludes there’s nothing he can do to convince the U.S. and its allies to lift crushing sanctions, the more likely he is to double down. In their essay, Sand and Freeman note that when the Japanese government in 1941 decided there was no way it could convince the U.S. to lift its devastating oil sanctions while remaining in power, this played a key role in Tokyo’s decision to attack Pearl Harbor.

To be fair, Putin isn’t only facing sanctions. He’s also fighting a war he probably can’t win. Perhaps that combination will produce a political effect in Russia that sanctions alone cannot. But what we know about sanctions is that when they work at all, it’s usually because the governments imposing them set modest goals for what they can achieve. Iran offers a perfect example: When Obama combined sanctions with a willingness to let Iran enrich some uranium, he halted Tehran’s nuclear program. When Trump demanded total Iranian capitulation, he got nothing at all.

For this reason, and because of the harm sanctions impose, Biden should tell the world that the U.S. will lift its sanctions against ordinary Russians when Russia and Ukraine strike a deal to end the war. Why hasn’t he done that? In part, I suspect, for the same reason Americans found it so hard to question the wisdom of invading Afghanistan in 2001. Because given the current outrage, it’s hard for Biden to do anything that makes him look soft on Putin. But if Biden doesn’t signal now that he’ll lift sanctions when there’s a diplomatic deal, he may find it impossible to do so when that deal comes. He may find it impossible because unless the Russian military utterly collapses, any diplomatic deal will require Ukraine to make painful and unfair concessions.

Volodymyr Zelensky has already acknowledged that he’s willing to give up on joining NATO. But Putin will likely also demand that he accept that Crimea is part of Russia and agree to some arrangement that leaves the self-declared separatist regions in eastern Ukraine beyond his control. Given Zelensky’s current popularity, he might be able to convince his people that such a deal is worth signing in order to make the bombing stop, especially if Ukraine can retain its arms, which it must. But even then, Americans, like Ukrainians, will be understandably disgusted. Which means Biden will face political pressure to maintain economic sanctions on Russia until there’s regime change, which is what the U.S. has been doing unsuccessfully in Cuba and Venezuela for years, while harming millions of ordinary people in the process.

All of America’s options in Ukraine are bad. Imposing sanctions is less bad than going to war or doing nothing at all. But the way many Americans talk about sanctions exaggerates their effectiveness and ignores their cost. And over the last few decades this has contributed to a sanctions addiction that has harmed both the U.S. and the world. So it’s crucial that Biden explain when sanctions will end. And it’s crucial that Americans support that decision even if doing so gets them labeled soft-on-Putin. The lesson of Afghanistan is that outrage is not a strategy. It’s one Americans need to remember now.

— Peter Beinart can be reached at https://peterbeinart.substack.com