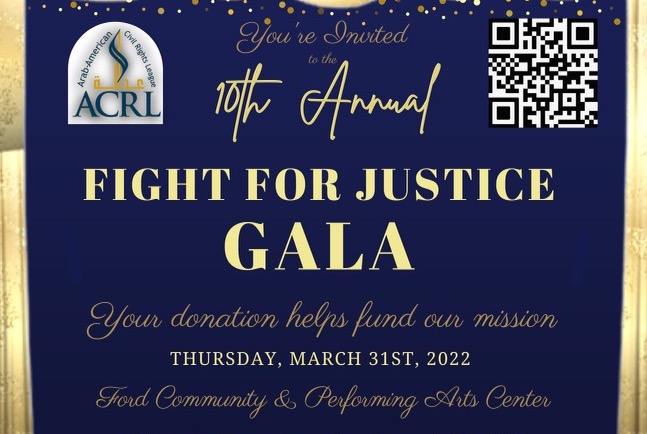 DEARBORN — The Arab-American Civil Rights League (ACRL) has announced its 10th annual “Fight for Justice” gala will be held at the Ford Community and Performing Arts Center in Dearborn on Thursday, March 31.

A reception is scheduled at 5:30 p.m. and the program begins at 6:30 p.m. The Ford Community and Performing Arts Center Hubbard Ballroom is located at 15801 Michigan Avenue.

Founded in 2011 by renowned attorney Nabih Ayad, the non-profit organization has also sought to promote cross-cultural cooperation and positive views of minority communities, which continue to be the target of increased discrimination, stereotyping and injustice.

The 10th annual dinner will highlight major civil rights issues in the community while acknowledging excellence in community service and social justice.

This year, the ACRL will honor four local elected officials who recently made history by winning mayoral campaigns in Hamtramck, Dearborn, Dearborn Heights and Birmingham.

“Mayors Amer Ghalib, Abdullah Hammoud, Bill Bazzi and Pierre Boutros are emblematic of the drive among local Arab Americans to empower positive change in their communities,” the release read. “Their election is a testament to a long history of Arab American civic engagement and public service.”

The ACRL will also present Rev. Dr. Wendell Anthony, president of the Detroit Branch NAACP and an ACRL board member, with the Civil Rights Achievement Award. Anthony will be recognized for his “ethical leadership and diverse representation in making significant contributions to civil rights. He will be thanked for his legacy of devoted service and leadership in the cause of equality.” “On March 31 ACRL will celebrate with the community the historical achievements of all our awardees,” Ayad told The Arab American News. “The mayoral awardees have broken the glass ceiling like none before.

“As founder, I take great pride that the fruits of the Arab community are blossoming into leaders of today. I am proud of each and every one of them as they have paved the road for so many young and upcoming Arab future leaders. We are certainly proud of our partners in the struggle, the leadership of Rev. Dr. Wendell Anthony and his partnership to this community is priceless. We honor all in pride.”

The large event marks a return to full-scale gatherings in Dearborn after COVID-19 cases have dropped significantly following this winter’s spike.

“While many of our community events have been on pause for the last two years due to the pandemic, ACRL has remained vigilant,” Allen said. ” ACRL never stopped doing the important work of protecting the rights of some of our nation’s most vulnerable people.

“We’ve definitely learned some things along the way by strengthening our partnerships with other organizations dedicated to ensuring equal treatment for all. We’ve emerged from the pandemic as a much stronger organization thanks to the generosity of the entire Arabic community and so many others who continued to lend their time, talent and treasure to our mission. Our gala not only celebrates that success, it gives us the opportunity to continue the important work we do serving this wonderful community and giving our best effort to ensure that its members live with dignity and respect.”