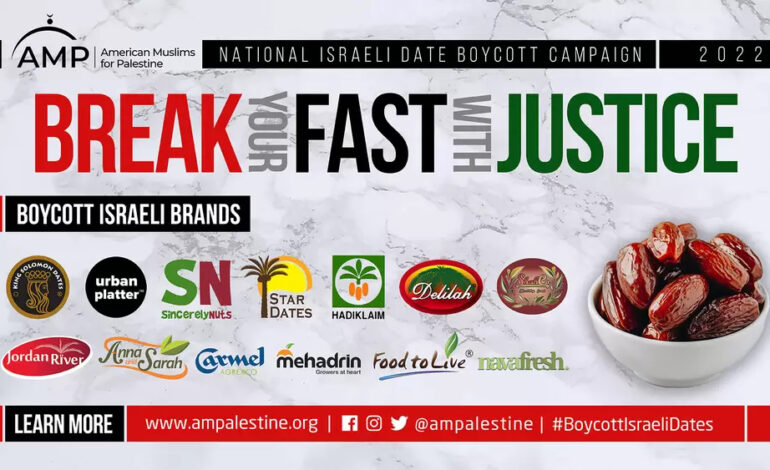 A rights organization is relaunching a Ramadan boycott of Israeli dates grown on illegal Israeli settlements on Palestinian lands, and harvested through abusive treatment of Palestinian workers.

The Council on American-Islamic Relations (CAIR), the nation’s largest Muslim civil rights and advocacy organization, is also joining the call to boycott Israeli dates during Ramadan and beyond.

The government of Israel purposefully does not distinguish whether dates sold overseas were grown in Israel or illegally occupied territories. Since then, AMP has distributed tens of thousands of postcards and brochures to stores, mosques and communities nationwide, said CAIR in a release. Dates are considered the “black gold” of Palestine. They are an important natural product of Palestine’s pure and blessed land, CAIR said. With the important, holy month of Ramadan beginning this weekend, this “black gold” is especially sacred due to the Muslim ritual of breaking fasts with them.

“But the Israeli colonial enterprise has produced its own industry of dates in a manner that is much more sinister,” said the organization.

The boycott campaign says Israeli date farms profit off of theft and abuse. They are predominantly grown in illegal Israeli settlements and are grown using stolen natural resources like water. Palestinian laborers, who are often forced by economic necessity to work in these illegal settlements, are forced to work in grueling physical conditions. Israeli labor laws are scarcely enforced when it pertains to Palestinian workers, leaving these Palestinians underpaid and un-compensated for their back-breaking work.

“CAIR strongly supports the First Amendment right of Americans to engage in boycotts in pursuit of civil and human rights at home and abroad,” said CAIR National Executive Director Nihad Awad. “Throughout our nation’s history, Americans have engaged in many important morally-driven boycotts, including the Boston Tea Party and the boycott of apartheid South Africa. “The American-led boycott of Israeli dates, many of which are grown and packaged in illegal Israeli settlements, is a continuation of our great nation’s proud tradition of waging economic boycotts to protest injustice.”

Organizers of the boycott recommend signing AMP’s petition, inspecting date packages for indication of origin or if the origin is not listed or is vague, Google the distributor or packer to find out their true origin.

They also recommend finding alternative date companies to buy from. Palestinian dates are often labeled “Grown in Palestine” and there are a plethora of Algerian, Tunisian, Emirati and Californian varieties to choose from.