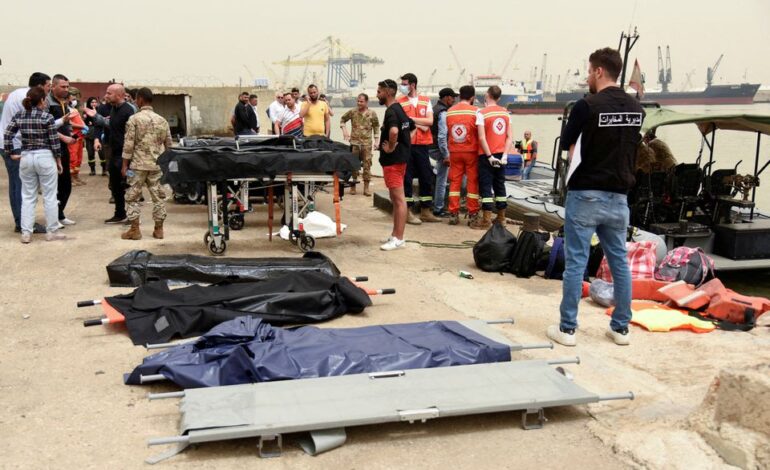 People stand near stretchers that are prepared for dead bodies after a boat capsized off the Lebanese coast of Tripoli overnight, at the port of Tripoli, northern Lebanon, April 24. Photo: Omar Ibrahim/Reuters

BEIRUT — Lebanon’s cabinet ordered the military court on Tuesday to investigate the capsize of a migrant boat after colliding with a naval vessel giving chase, with at least six dead and dozens missing.

The boat carrying Lebanese and Syrian migrants sank off the coast near the impoverished northern city of Tripoli on Saturday night. The U.N. refugee agency said around 80 people were on board, including men, women and children.

Some 45 were rescued and six bodies recovered.

After a cabinet meeting on Tuesday, Information Minister Ziad Makary announced the investigation order and also said Lebanon would seek international help to salvage the wreckage of the dinghy.

Lebanon is in the midst of an economic collapse that has plunged a large section of the population into poverty, leading to a growing number of people attempting the perilous sea journey towards Europe, mostly via Cyprus.

Many of those on board the vessel were from Tripoli, where funeral processions for six victims turned into displays of public anger at the authorities.

Several of the survivors have said that a Lebanese military vessel rammed the migrants’ boat, leading it to sink.

The army has said the boat had left the Lebanese coast illegally and that the boat’s captain had been trying to evade capture when the collision occurred.

Lebanon’s military court is staffed by members of the army and observers have in the past raised concerns about its independence.

Army Commander Joseph Aoun, the head of military intelligence and the head of Lebanon’s navy, attended Tuesday’s cabinet session and gave a “detailed presentation of the facts of what happened with the boat,” according to a tweet from Lebanon’s presidency.

It also said that Prime Minister Najib Mikati, a billionaire tycoon who comes from Tripoli, had “great confidence in the army command and we are sure that it is keen to preserve the lives of all Lebanese and the credibility of the investigations.”