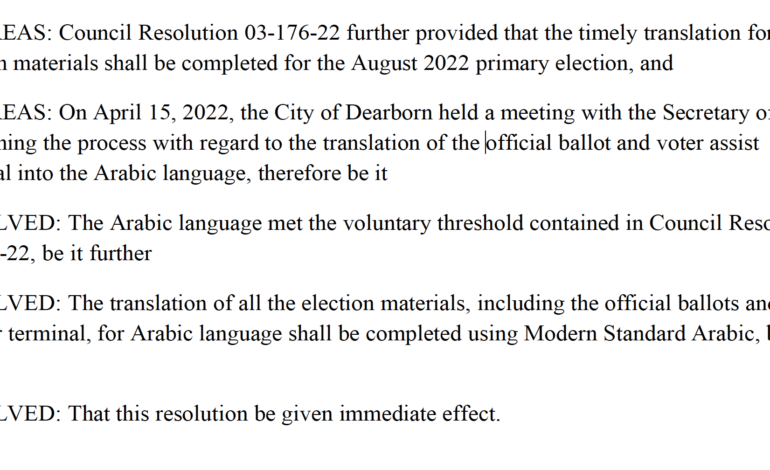 DEARBORN — An effort to increase language access in Dearborn by its City Council may have taken a positive step forward last week.

In a special meeting, the Council passed a supplemental to its earlier resolution to translate election materials, including ballots, for its minority residents. On the insistence of Wayne County Clerk Cathy Garrett, the supplemental specifies the translations will be done in “Modern Standard Arabic.”

In March, the Council passed the original resolution, which directed its city clerk to translate materials into any language spoken by more than 10,000 residents (or 5 percent of the population, whichever criteria is met first). Those are numbers set by the U.S. Voting Rights Act (VRA). Arabic is that language in Dearborn.

Arab Americans are considered “White” in the U.S. Census and therefore are not part of the language minority groups written in the VRA. But the federal government does recognize Arabic a language spoken at home. Michigan Secretary of State Jocelyn Benson has also said that there is nothing in the law that says the Council can’t extend that access to its primarily Arab-speaking voters, which by the latest count meet the percentage requirement.

The resolution, brought forth by Councilman Mustapha Hammoud, did not specify the particular language in the original, as it sought to utilize the spirit of the VRA.

But Garrett has insisted that the resolution needs to specify the language and “dialect” in which it is seeking translations, without giving a reason why. Previous translations in Dearborn for sample ballots and more have been conducted in standard Arabic, which is understood widely throughout the Arab world.

Garrett has noted that there is no federal mandate to translate election materials into Arabic, as in the case of the Asian language Bengali (or Bengla) spoken in Hamtramck, and that there is no procedure for the county to translate for a language required by a local body like the Council. The Secretary of State’s Office has informed Garrett that she can simply replicate the translation procedures for Bengali election materials, including ballots, that have taken place in Hamtramck for more than a decade now.

Bengali is an Asian language and therefore falls within the four “language minority groups” in Section 203 of the VRA; and the Census Bureau mandated Hamtramck and the County, which formats and prints ballots, to translate materials in that language in 2011.

Hamtramck also recently passed its own, very similar, resolution for ballot translations. But that Council specified Arabic as the language to be translated from the outset.

“I’m glad Council unanimously passed the supplemental resolution to clarify additional details to the county and city clerks, and I look forward to continuing to work toward the implementation of this initiative,” Hammoud told The Arab American News.

For now, the Dearborn community, including its administration, are looking for the translations to be done by the August primary. That primary will see a slate of Arab candidates running for multiple municipal, state and federal elections. A significant one is for the U.S. Congress, where the district covering Dearborn could see its first Arab American representative, Rashida Tlaib, who is competing against Lathrup Village resident Kathy Garrett (a relative of Cathy) and others.