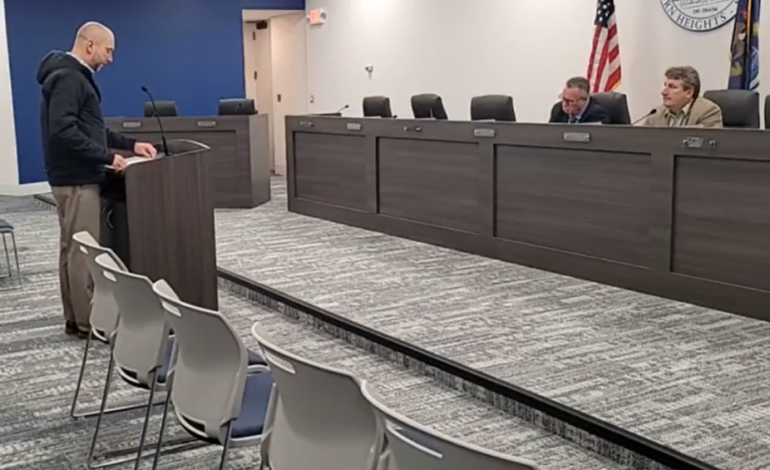 Former Dearborn Heights Police Chief Mark Meyers presents his case during the Act 78 hearing regarding his removal. Photo: Screenshot of the hearing

DEARBORN HEIGHTS — Months after former Police Chief Mark Meyers was terminated, the ACT 78 Commission ruled in his favor, but the city is still contesting.

Meyers was relieved of his position in February, which he contested before the Act 78 Commission on March 24.

Act 78, or the Police and Civil Service Act, was first passed in 1935 to establish and provide a board of civil service commissioners in cities, villages and municipalities having full-time paid members in the fire and/or police departments, to provide a civil service system based upon examination and investigation as to merit, efficiency and fitness for appointment, employment and promotion of all full-time paid members appointed in the departments. It was also intended to regulate the transfer, reinstatement, suspension and discharge of officers and firefighters.

Former Act 78 Commission President Martin Crandall was removed from the commission on March 23, the day before Meyer’s hearing; however commissioners Stephen Popp and Stephen Lobkovich, continued with the hearing and after studying the case and investigating, determined that Meyers should be reinstated.

“Let it be known, the Dearborn Heights Act 78 Civil Service Commission finds that no cause for the termination of Chief Mark Meyers has been demonstrated by the Appointing Authority in the city of Dearborn Heights,” the official ruling letter stated. “Therefore, per Act 78 35.514, Chief Mark Meyers is to be reinstated with full pay for the entire duration of his separation from service, pursuant to the language in sec. 38.514 of P.A. 78 of 1935.”

Lobkovich told The Arab American News it’s his opinion that because the city’s charter was adopted before Act 78, the Act 78 ruling supersedes any language in the charter.

“Act 78 has always covered all police and fire chiefs since the beginning,” he said. “Our mission is only to enforce Act 78. We believe that the creation of the commissioner position and the appointment of the new chief are improper. Chief Meyers was granted a hearing, but no one represented the city and so we only heard Meyers’ side of things and any employee is protected and has to go through Act 78. Either way, anyone deserves to know why they are terminated from a lifelong career and our ruling was based on lack of evidence.”

Christopher Mikula, an attorney representing the city in the petition filed in Wayne County Circuit Court, told The Arab American News that while they cannot comment regarding Meyers’ position due to being a “private personnel matter”, the charter is what the city is to abide by.

“Act 78 vests the mayor with the authority to appoint an Act 78 commissioner and also permits the mayor to remove an Act 78 commissioner for incompetency, dereliction of duty, malfeasance in office or any other good cause,” he said. “If the removed commissioner opposes the mayor’s removal decision, the mayor is required to file a petition in circuit court to confirm the removal decision. On March 22, former commissioner Crandall notified Mayor Bazzi that he planned to conduct an Act 78 hearing for former Chief of Police Mark Meyers, despite a provision in the City Charter, which was enacted by the voters of the city of Dearborn Heights, which excludes the chief of police from Act 78 coverage. Upon being notified of Mr. Crandall’s intended action, Mayor Bazzi removed Mr. Crandall from his position. On March 29, Mr. Crandall notified Mayor Bazzi that he opposed his removal. Therefore, on April 1, Mayor Bazzi filed a petition to confirm the removal of Mr. Crandall in Wayne County Circuit Court. We trust the court will give this important matter the careful attention that the voters of the city of Dearborn Heights deserve.”

Section 5.11(b) of the city’s charter excludes department heads from being covered by the Civil Service Commission. Section 5.11(b) of the Dearborn Heights City Charter

“The ordinance shall contain a provision providing for unclassified service and classified service shall exclude all of the following officers and employees from the provisions of the Civil Service System, to-wit, all officers of the city whether elected or appointed, all part-time employees, all board or commission members appointed directly by the mayor and/or the Council, the city attorney, the city engineer, the city auditor, the city health officer, the city assessor, the comptroller, the fire department chief, the police department chief and any other head of any other department of the city which are now or may hereafter be created whether specifically mentioned herein or not,” the charter read.

On April 12, the Dearborn Heights City Council tabled the mayor’s nomination of Raed Mourad to the commission due to the pending decision from Wayne County.

A decision has not yet been made by Wayne County regarding Crandall’s removal and it was not confirmed whether Meyers will be seeking legal action against the city.

Huntington Bank partners with The Arab American News to give $75,000 in scholarships to Dearborn, DBH students