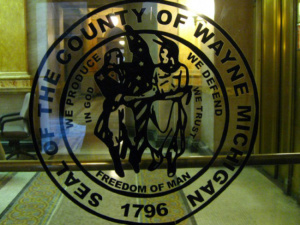 The funds were intended for the Wayne County roads division.

The suspects, Kevin Gunn, 64 of West Bloomfield, and John Gibson, 54 of Detroit, were both employed with Wayne County when they allegedly solicited vendors who held contracts with the road division to buy generators from local retailers on behalf of the county. The two allegedly purchased nearly 600 generators and other power equipment tools that were then sold for personal profit.

The scheme has been going on since 2019 according to a complaint filed by the U.S. Justice Department in the Eastern District of Michigan.

To conceal the scheme, vendors reportedly falsified their invoices that were submitted to the department and would instead list items that they were authorized to sell under their contracts.

According to a federal complaint, once the men had the generators, they resold them at significantly reduced prices on Facebook Marketplace and pocketed the money.

In addition to the generators, they also reportedly bought lawnmowers, chainsaws, and backpack blowers.

Wayne County Executive Warren C. Evans said that his office has been involved with assisting in the investigation and requested assistance from the county sheriff, county prosecutor, FBI, and Attorney General.

“I take public corruption very seriously and will pursue every avenue to fully prosecute these employees and vendors,” Evans said. “Disciplinary hearings for the two employees arrested this morning are scheduled for this afternoon with their union representatives. Immediate termination is expected based upon the gravity of the offenses. There are no county elected officials or executive appointees implicated in the investigation. As this is an open investigation, I am unable to provide additional details.”

Gunn is the manager of the Bridge Unit with the Wayne County Roads Division and has been employed by the county for 34 years. Gibson is a foreman at the agency and has worked for the county for 20 years.

The county receives nearly $20 million a year in federal funding for road construction.

The complaint said that the Wayne County Sheriff’s office was given a tip in March 2021 about an unusual increase in purchases of generators by a party identified as Vendor A, which was acting on behalf of the county.

The same day, Gunn reportedly ordered the purchase of 14 Honda generators which were paid for by another party identified as Vendor B and instead of invoicing the county for the generators, it invoiced for items authorized under its contract.

After the purchase was complete, two men in a black Dodge pick-up truck with a U-Haul trailer picked up the generators and the truck was registered to an individual who is cooperating with the investigation, according to the complaint.

A search warrant executed by the sheriff’s office recovered the generators purchased by Vendor B and $40,000 in cash from a safe. The county was then informed of the scheme which was outlined by the cooperating individual, who was also a roads division employee.

With the individual’s consent and help, officers were able to conduct surveillance while a payment of $4,500 in cash was made to Gunn.

On June 16, federal authorities reported another incident when Gibson was spotted loading several generators into the bed of a truck that were paid for by Vendor A. He later was observed taking the generators to a private residence where they were unloaded into a large, metal shipping container.

Both men were taken into custody on May 3 by FBI agents, Wayne County Prosecutor’s Office Investigators, and Wayne County Sheriff’s Deputies.

Report ranks Metro Detroit as worst, most expensive in U.S. for drivers