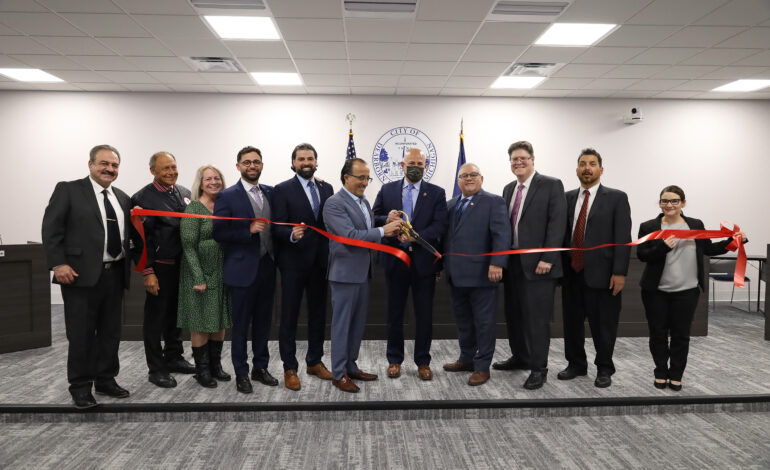 DEARBORN HEIGHTS — The city of Dearborn Heights has finally completed a long overdue renovation of its City Council chambers, now called “Studio B.”

The City Council kicked off its April 26 meeting with a celebratory ribbon cutting.

The room underwent a total renovation from the ground up, including construction, decor, lighting, furnishings and technology hardware that took several months to complete.

In addition to hosting the traditional City Council meetings, Studio B will also host City Hall-based videotapings and photo sessions as a supplement to the city’s regular cable TV studio.

“I am delighted at the results of this project,” Mayor Bill Bazzi said. “We finally have an up-to-date, fully ADA-compliant room for our meetings and taping sessions we can be truly proud of. Anyone who was in the old room knows how desperately the room needed updating, as no improvements had been made for decades. Everything was stripped out and replaced, including the flooring, ceiling, wall coverings and furniture.

“Particularly impressive now are the state-of-the-art technological improvements. We will no longer have to rely on a camera operator running a single tripod-mounted camera in the back of the room during Council meetings, panning back and forth in an attempt to capture everything that was going on. We now have four wall-mounted robotic cameras and all new audio equipment that are operated in the adjacent control room that will let us capture everything.”

With all the changes the fluorescent lighting has also been replaced by energy-saving LED lighting and an improved HVAC system will help maintain more tolerable temperatures during meetings.

The majority of the meetings and events held in this room are recorded and replayed over the city’s cable TV and social media. With much of the room’s redesign being centered on the effective use of electronic media to inform and educate the public, funding for the project was provided through the Public, Educational and Governmental (PEG) funds — which are paid to the city on a per-subscriber rate by the three cable companies that serve the city. Use of these funds is restricted specifically for purposes such as this and may not be used for the city’s general operations.

“This room has finally been transformed from one that was a source of embarrassment for officials, staff and visitors alike into one we can all look at and use with a sense of pride,” Bazzi said. “It is a great improvement for our communications operations. I congratulate City Engineer Ali Dib and all those who participated for their great work on bringing this project to fruition.”