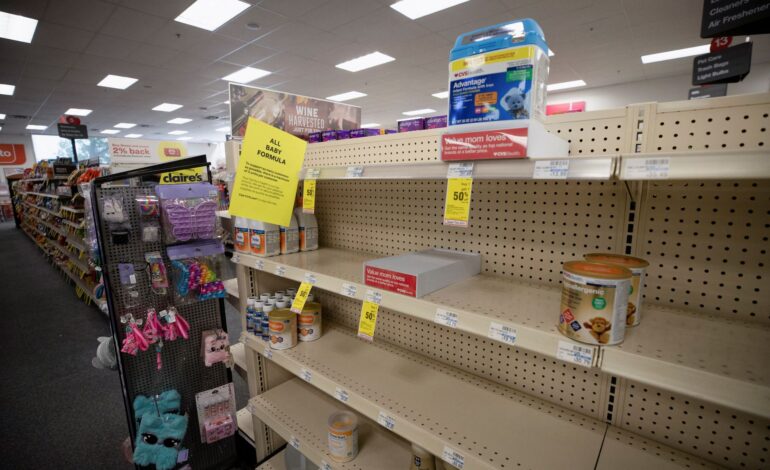 WASHINGTON, D.C. — President Biden took steps on Wednesday to address the shortage of infant formula in the U.S., invoking the Defense Production Act to help manufacturers obtain the ingredients needed to ramp up supply, the White House said.

Biden also directed U.S. agencies to use Defense Department commercial aircraft to bring  baby formula into the U.S. from overseas.

On Monday, Abbott said it had reached an agreement with the U.S. health regulator to resume production of baby formula at its Michigan plant, a major step toward resolving the nationwide shortage.

In a letter to Health and Human Services Secretary Xavier Becerra and Agriculture Secretary Tom Vilsack, Biden noted that the industry should be producing more formula in the coming weeks and months.

On Monday, Abbott Laboratories said it had reached an agreement with the U.S. health regulator to resume production of baby formula at its Michigan plant

“Imports of baby formula will serve as a bridge to this ramped-up production,” he said. “Therefore I am requesting you take all appropriate measures available to get additional safe formula into the country immediately.”

The White House said Biden was invoking the Defense Production Act to ensure manufacturers have the ingredients to make safe formula.

“The president is requiring suppliers to direct needed resources to infant formula manufacturers before any other customer who may have ordered that good,” the White House said.

In addition, he launched “Operation Fly Formula” to hasten imports of infant formula and get more formula to stores quickly.

Biden has directed the HHS and the USDA to use military commercial aircraft to pick up overseas infant formula that meets U.S. health and safety standards.

“Bypassing regular air freighting routes will speed up the importation and distribution of formula and serve as an immediate support as manufacturers continue to ramp up production,” the White House said.

Free and reduced-cost high speed Internet available to many: Here’s what to know