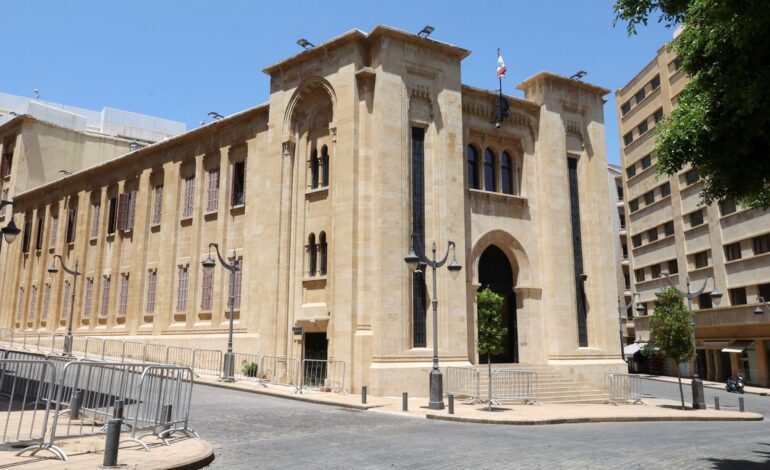 BEIRUT – When Halime El Kaakour enters Lebanon’s parliament as a newly elected lawmaker next week, she will step past the same concrete barriers that security forces erected to keep her and other protesters out during massive anti-government rallies in 2019.

Powered by that protest movement and popular anger over the financial implosion that followed, about a dozen activists and reform-minded newcomers like her were elected to the 128-member legislature on Sunday.

“You don’t want us to enter parliament as normal citizens? You blocked us and put up walls? Well, now we’re entering as MPs,” Kaakour, who has a PhD in public international law and teaches at the Lebanese University, told Reuters.

Reform-minded candidates ran without the financial resources or staff of established factions, but still won more than 200,0000 votes, second only to the powerful  group Hezbollah, gaining seats across Lebanon’s electoral districts and sects.

It marked a significant break from politics-as-usual in Lebanon, where a handful of parties claiming to represent the country’s mosaic of religious sects have dominated politics since a 1975-90 civil war. Halime El Kaakour, a newly elected Lebanese MP who has a PhD in public international law and teaches at the Lebanese University, speaks during an interview with Reuters in Mechref, Lebanon, May 18. Photo: Reuters

“People can’t believe it… We are planting hope and, God willing, we will harvest change,” said Kaakour, 46, and the only Sunni Muslim woman in parliament.

Their wins weren’t the only surprises in Sunday’s poll. Shi’a armed movement Hezbollah and its allies lost the majority they had won in 2018, while their opponents — the Christian Lebanese Forces party — made some gains.

Analysts say that could heighten sectarian tensions as the Lebanese Forces party pushes for Hezbollah’s disarmament — but most new candidates say there are more pressing issues at hand.

“The battle is economics”

They blame established parties for policies that unleashed an economic crisis that has pushed nearly three-quarters of Lebanon’s population under the poverty line and seen the local pound lose more than 90 percent of its value.

“For more than 30 years they have been saying the same things, while electricity and water and education were at rock-bottom and they divided spoils and stole,” Kaakour said.

“The priority now is to respond to people’s crisis of living… the battle is economic par excellence.”

Elias Jrade, an eye surgeon who won a seat in Hezbollah’s south Lebanon stronghold, told Reuters he would seek to reform the healthcare system, electricity woes and public schools.

Jrade unseated one of Lebanon’s longest-sitting MPs: 70-year-old Assaad Hardan, who had been in parliament for 30 years. Elias Jrade, an eye surgeon and newly elected Lebanese MP, attends an interview with Reuters at his clinic in Beirut, Lebanon, May 18. Photo: Reuters

The slender Christian Orthodox said he ran because of his daughter’s urge to join anti-government demonstrations after the Beirut port blast of 2020, which many blame on safety failings by senior officials.

“I thought, shame on me. My 16-year-old daughter wants to protest to build a nation for me. That should be my duty,” he told Reuters, holding back tears. He spoke three days after the election, between back-to-back operations at his Beirut clinic, which he said he intends to continue as MP.

Like-minded newcomers have been meeting to align their positions, but Jrade said he preferred not to form a single party so each could continue to operate independently. Either way, he said, he doesn’t plan to be in parliament for long. A supporter of the Amal Movement drives past a poster of Lebanon’s Hezbollah leader Sayyed Hassan Nasrallah on the parliamentary election day in Houla, southern Lebanon, May 15. Photo: Reuters

“If in four years, I get asked to run again — that means I failed. I failed to prepare young people to take over, from every region, every faction, from the far-left to the far right.”

The leader of Lebanon’s Hezbollah, Sayyed Hassan Nasrallah, acknowledged his party and its allies had lost their parliamentary majority in elections, but said no single group had taken it, in his first televised speech since Sunday’s election.

“Unlike the situation in parliament in 2018, no political group can claim a majority,” he said.

Hezbollah and its allies scored 62 seats during Sunday polls, according to a Reuters tally, losing a majority they secured in 2018, when they and their allies won 71 seats.

Hezbollah and its ally Amal held on to all of parliament’s Shi’a seats. But some of its oldest allies, including Sunni, Druze and Christian politicians, lost theirs.

The elections saw gains by the anti-Hezbollah Lebanese Forces party and more than a dozen reform-minded newcomers, as well as a smattering of independents.

Even though Hezbollah and its allies lost the majority in the newly elected parliament, Nasrallah declared the results “a very big victory.”

For Lebanon, this could mean everything, or nothing at all.

The country’s new parliament remains largely split between pro-Iran and pro-Saudi blocs. Hezbollah still commands the largest single parliamentary bloc and the new political makeup signals that the country is headed, yet again, for a costly stalemate.

Nasrallah called for “cooperation” between political groups, including newcomers, saying the alternative would be “chaos and vacuum.”

The results have left parliament split into several camps, none of which have a majority, raising the prospect of political paralysis and tensions that could delay badly needed reforms to steer Lebanon out of its economic collapse.

“Fragmentation has increased in the parliament and this makes the process of legislation and forming majorities difficult,” FPM leader Gebran Bassil said in a Tuesday news conference, calling on newcomers to work together with his party.

Hezbollah opponents, including the Saudi-aligned Lebanese Forces — a Christian faction — gained ground. It won around 19 seats, up from 15 in 2018, while the Hezbollah-allied Free Patriotic Movement (FPM) kept 21 seats, according to officials from both parties.

The Saudi ambassador to Lebanon took an apparent swipe at Hezbollah on Tuesday without naming it, tweeting that the result “proves the inevitability that the logic of the state will win against the absurd excesses of the statelet disrupting political life and stability in Lebanon.”

The final results on Tuesday included a record of eight women lawmakers, nearly half of them newcomers.

United Nations Secretary-General Antonio Guterres called in a statement late on Monday for the swift formation of an inclusive government to stabilize the economy.

Many political analysts believe that is unlikely because groups within the “polarized parliament” would lock horns when electing a parliamentary speaker, naming the next prime minister and voting on a president later this year.

The local currency has lost more than 90 percent of its value, reaching 30,000 pounds to the U.S. dollar last Tuesday, roughly a 10 percent loss since Sunday’s election.

But Lebanon’s central bank said on Tuesday it would continue to allow commercial banks to purchase dollars on its Sayrafa platform rate “without amendment”, an operation that has helped stabilize the exchange rate since it began in January.