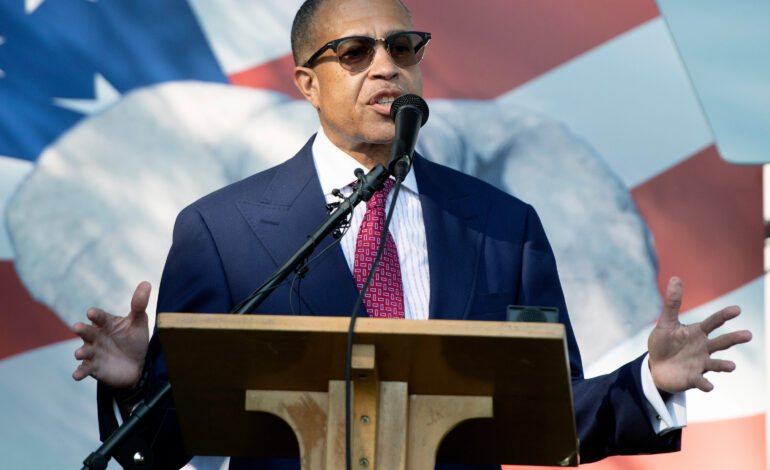 LANSING — The state’s election bureau has said five Republican candidates for Michigan governor, including two top contenders, should not qualify for the August primary due to insufficient valid nomination signatures.

The Michigan Bureau of Elections, which is a part of the Democrat-led Secretary of State office, said earlier this week that the five submitted thousands of fraudulent signatures on petitions.

The bipartisan Board of State Canvassers was deadlocked 2-2 on Thursday on a vote to determine if the candidates were qualified to compete in the primary, with two Democrats supporting the recommendation that they be removed and two Republicans saying the candidates should get on the ballot.

Since the canvassers need a majority decision to keep a candidate on the list, the tie vote means the candidates lost.

Among the five candidates are former Detroit Police Chief James Craig, who has led in primary polling despite campaign problems, and businessman Perry Johnson, who has spent millions of his own money to run. Though the decision is expected to be fought in court, for now, the 10-person field of political newcomers opposing Governor Whitmer in this year’s election is cut in half.

The bureau said it discovered the fraud on its own review and did not process the challenges filed by the Michigan Democratic Party and Dixon.

The bureau said Craig submitted 10,192 valid signatures, well short of the 15,000 needed. It tossed 11,113 signatures, including 9,879 that were allegedly fraudulently collected by 18 paid circulators.

The agency found evidence of consistent handwriting across all signatures on individual petition sheets and of “round-tabling”, where circulators took turns signing a line on each sheet in an effort to vary handwriting and make signatures appear authentic.

Craig called the decision “a travesty” and said the bureau should have done a line-by-line verification of signatures he submitted, rather than rejecting entire pages based on its findings of fraud. He said his campaign will file an “immediate appeal.”

“We are confident that when the law is justly applied, our campaign will be on the ballot this August,” he said.

The bureau said Craig submitted 10,192 valid signatures, well short of the 15,000 needed. It tossed 11,113 signatures, including 9,879 that were allegedly fraudulently collected by 18 paid circulators.

Craig’s attorney said the campaign acknowledges it appears there was fraud by the people who gathered signatures, but said Craig himself is a victim.

Johnson turned in 13,800 valid signatures, according to Bureau of Elections staff. They tossed 9,393, including 6,983 that they said are fraudulent and were gathered by many of the same people who also forged signatures that Craig submitted.

Johnson has also vowed to fight the decision in court.

The Bureau of Elections also uncovered more than 42,000 bogus signatures collected for candidates Donna Brandenburg, Michael Brown and Michael Markey. The agency dismissed a challenge to Dixon brought by Democrats who said the heading on her petition wrongly listed the end of the next gubernatorial term as 2026, when it is Jan. 1, 2027.

The bureau said it was working to refer the fraud to law enforcement for criminal investigation.

Republican board member Tony Daunt said he rejects suggestions that state staff acted for partisan reasons, as some have alleged, but he said he couldn’t support kicking candidates off the ballot because the staff didn’t have the resources to check every signature.

Polling this month shows generally close favorability between Republican and Democratic candidates among voters in the state’s gubernatorial, attorney general and secretary of state races.

Those offices have big implications for contentious issues between Democratic and Republican-leaning voters, such as election fraud, abortions and more.

When asked which governor they would pick if the election were held today, 46 percent of respondents chose whomever the Republican candidate would be, versus 45 percent saying they would vote for Whitmer.

A statewide poll conducted by EPIC-MRA reveals just how close the favorability is.

When asked which governor they would pick if the election were held today, 46 percent chose whomever the Republican candidate would be, versus 45 percent saying they would vote for Whitmer.

AG and SOS polling showed similar numbers, even though Republican candidates in those elections suffer from low name recognition.

Forty-one percent said they would vote for Republican Attorney General candidate Matt DePerno over Democratic incumbent Dana Nessel, who was preferred by 43 percent of the respondents.

On those hot-button issue, respondents seemed to lean in favor of Democrats.

Sixty-three percent said they would disagree with a U.S. Supreme Court decision overturn the Roe v. Wade (which makes abortions legal federally), versus only 26 percent who said they would agree.

Sixty-one percent said they believed Joe Biden won the election fair and square, with only 27 percent responding they thought Biden stole the election from Donald Trump.