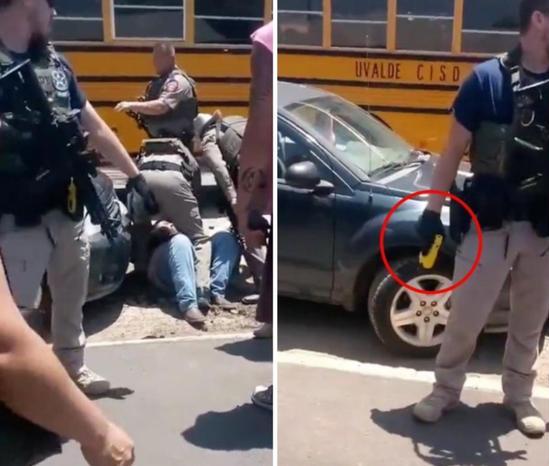 A desperate parent is restrained by police outside of a Texas elementary school as a shooting massacre unfolds inside, with police waiting for an hour for a tactical team. Photo via Twitter

Videos from Tuesday’s mass shooting at Robb Elementary School in Uvalde show desperate parents outside pleading with officers to storm the building, and some fathers restrained by police brandishing tasers, as officers waited for an hour for a tactical team to storm the school and kill 18-year-old gunman Salvador Ramos.

The new details, which differ sharply from initial police accounts, have raised questions about the police response.

Ramos drove to the school from his home after shooting and wounding his grandmother, crashed his pickup truck nearby, scaled a fence onto school property and walked into one of the buildings through an unlocked rear door.

He then barricaded himself inside the fourth-grade classroom of his victims, mostly 9- and 10-year-olds, for an hour before a U.S. Border Patrol tactical team breached the room and fatally shot him.

Officers reported hearing at least 25 gunshots coming from inside the classroom early in the active shooting massacre.

Asked if police should have made an entry sooner, Texas Department of Public Safety (DPS) spokesperson Victor Escalon answered, “That’s a tough question”, adding that authorities would offer more information as the investigation continued.

Videos posted on social media show parents breaking through yellow police tape and yelling at officers to go into the building. Officers guard the scene of a shooting at Robb Elementary School in Uvalde, Texas, May 24. Photo: Marco Bello/Reuters

According to the Gun Violence Archive, 213 mass shootings, defined as incidents in which at least four people were shot or killed, have already occurred in the county this year.

Another video posted on YouTube showed officers restraining at least one adult.

“Why let the children die? There’s shooting in there,” a woman can be heard saying.

One school safety consultant told The Texas Tribune that police are trained to immediately enter and try to subdue the shooter, even if they’re alone on the scene, a policy that came out of 1999’s Columbine High School shooting.

The husband of one of the slain teachers died of a heart attack on Thursday while preparing for his wife’s funeral.

Though Ramos had no criminal record or known history of mental illness, he had written an online message saying he was about to “shoot up an elementary school.”

The attack came 10 days after 10 people were killed by an 18-year-old gunman in a supermarket in Buffalo, New York and has reignited a national debate over firearms.

The Texas shooting is one of the deadliest in the U.S. in nearly a decade, but mass shootings are a routine occurrence in the country.

According to the Gun Violence Archive, 213 mass shootings, defined as incidents in which at least four people were shot or killed, have already occurred in the county this year.

New book details the story of Arab Americans in Indianapolis