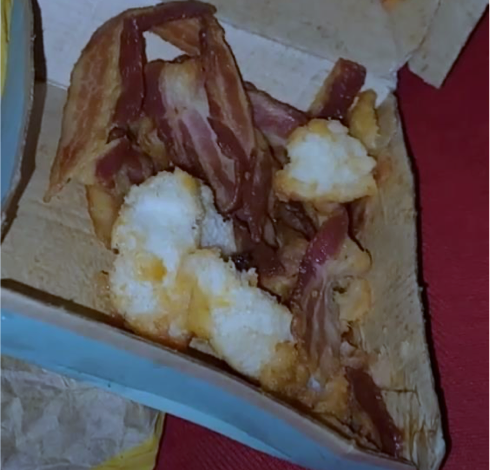 A visibly Muslim family was given an egregious amount of bacon on a fish sandwich they had explicitly requested be plain. Photo via CAIR-MA

CHICOPEE, MASS — A Muslim woman in Massachusetts has filed a legal complaint against a McDonald’s restaurant whose employees purposefully stuffed bacon into a fish sandwich she and her son bought.

“McDonald’s made my children and me feel unwanted and worthless by intentionally stuffing a fish sandwich full of bacon for no other reason than to punish us for our faith and religious convictions,” said Ghadir Alahmar, who migrated to the U.S. from Yemen in 2014 and is a permanent resident. “This really hurt us. My children now wonder if they are welcome in their own country. They ask me, ‘Do they hate us?’ How is a mother supposed to answer that question?”

The Massachusetts chapter of the Council on American-Islamic Relations (CAIR-MA) filed the complaint against the restaurant with the Massachusetts Commission Against Discrimination (MCAD).

McDonald’s made my children and me feel unwanted and worthless by intentionally stuffing a fish sandwich full of bacon for no other reason than to punish us for our faith and religious convictions. — Ghadir Alahmar

According to the complaint, Alahmar, who was at a McDonald’s in Chicopee with her two young children, had explicitly requested a plain fish sandwich for her son. She asked her son to make the explicit request the sandwich be plain, in case the employee at the counter didn’t understand her due to her accent.

Alahmar is visibly Muslim. She wears a hijab, or Islamic headscarf, and an abaya, a long Islamic dress.

The employee then “intentionally and maliciously” added bacon to the sandwich. In fact, the family was given three to four times the amount of bacon that would normally be provided if and when a customer requests it.

“It is commonly known that Islam forbids Muslims from eating pork,” the complaint read. “McDonald’s employees willfully added bacon to the Complainant’s food in an effort to offend, humiliate and cause distress to Complainant and her young children.”

After she paid for the food, Alahmar and her family were made to wait 10 minutes. Another family came to the counter after them and received their order before Alahmar.

An employee finally came out with the food. Alahmar and her sons discovered at a nearby park that the sandwich had three to four full strips of bacon.

Unbeknownst to Alahmar, her receipt said “ONLY 2 Half Strips Bacon,” which is the normal amount given to customers on request. A receipt shows bacon was added on the family’s order, even though the employee had been given explicit instructions by the visibly Muslim family. Employees then added more than twice the amount of bacon to the fish sandwich. Photo via CAIR-MA

“Why did they do this? Do they hate us?” asked one of the sons; the family was upset and angry with the experience.

A manager later told Alahmar’s husband that the employee may have accidentally pressed “add bacon” on the screen. The manager refunded the price of the sandwich and the add-on.

The complaint says the “excessive quantity” of bacon added to the sandwich, which would have been less than half the amount even if the bacon had been added on by the employee accidentally at the register, shows willful discrimination against Alahmar and her family.

“Anti-Muslim bias takes many forms,” said CAIR-MA Legal Director Barbara J. Dougan, who represents the family. “But you can’t go much lower than tampering with the food of a young child. We hope that McDonald’s will find these actions as appalling as we do and take all needed measures to ensure that something like this never happens again at the Chicopee store or any other location. Religious discrimination at a place of public accommodation is not only illegal, but also morally reprehensible.”