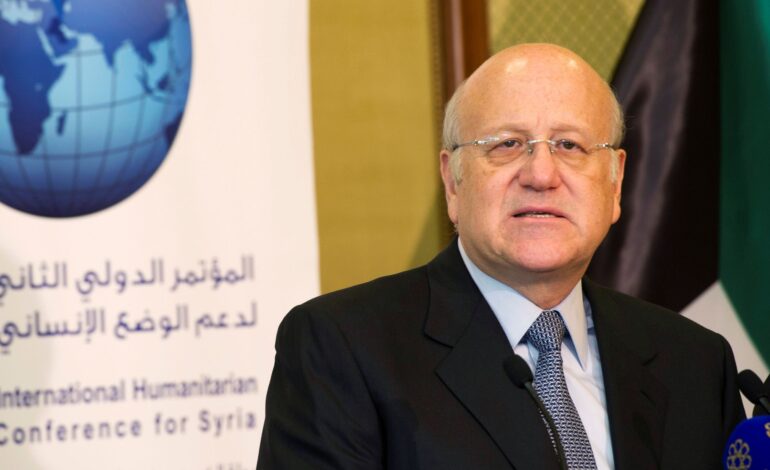 BEIRUT — Lebanon’s caretaker premier Najib Mikati will likely be nominated for a new term on Thursday, political sources said, keeping him at the helm as the country prepares for steep financial and political challenges in the months ahead.

If re-installed, Mikati will have to steer Lebanon through an economic recovery plan that aims to secure a $3 billion International Monetary Fund (IMF) bailout to ease the country’s financial meltdown, one of the worst in modern times.

Factions of Lebanon’s political and financial heavyweights remain divided over key issues, including how to address financial sector losses estimated at more than $70 billion.

Political sources said Mikati, a billionaire from the northern port of Tripoli, would garner the support of more than 50 of 128 parliamentarians, including the powerful Iran-backed Hezbollah, the allied Amal party and Sunni Muslim lawmakers.

They are set to nominate Mikati during consultations with President Michel Aoun on Thursday at the presidential palace in Baabda, party sources told Reuters.

If more parliamentarians back Mikati than any other candidate on Thursday, even if they do not comprise an absolute majority, then Aoun will name him to form a government.

That process often draws out for months in Lebanon as the main political factions divvy up roles in cabinet and beyond.

In theory, Mikati’s new term may not last long: after Aoun’s term ends on Oct. 31, parliament will elect a new president — who names a new premier to form another cabinet.

Aoun’s Free Patriotic Movement will not back Mikati, according to party head Gebran Bassil.

The Lebanese Forces Party, a Christian faction close to Saudi Arabia and vociferously opposed to Shi’a Muslim Hezbollah, announced on Wednesday it would nominate no one.

The LF has the largest single-party bloc in parliament.

A host of independent newcomer parliamentarians were set to vote for Nawaf Salam, a judge and Lebanon’s former ambassador to the U.N.

Under Lebanon’s sectarian power-sharing system, the post of premier is reserved for a Sunni Muslim, the presidency for a Maronite Christian and the parliament speaker for a Shi’a.

Unlike many Lebanese leaders, Mikati does not hail from a traditional political dynasty, but has built a successful business empire.

He has served as prime minister three times before, mostly in times of crisis, including his most recent term. He was nominated in September 2021 after leading Sunni and ex-premier Saad Hariri failed to form a cabinet.