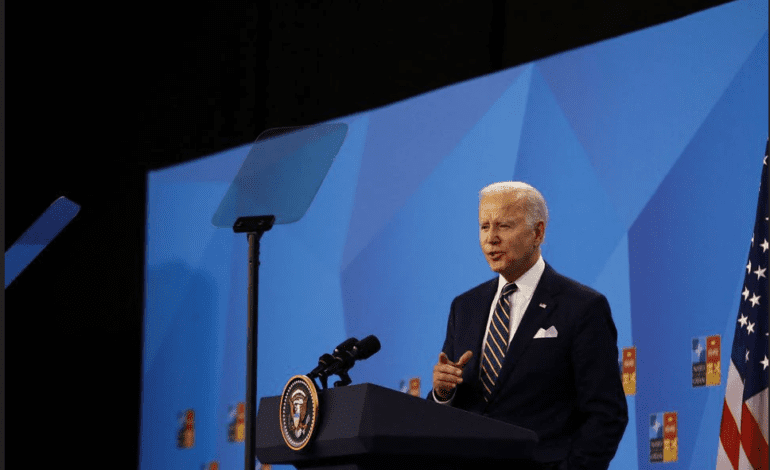 President Biden said on Thursday he would not directly press Saudi Arabia to increase oil output to curb soaring crude prices when he sees the Saudi king and crown prince during a visit later this month.

Biden also said at a news conference in Spain that Americans will have to stomach high gas prices for “as long as it takes” to beat back Russian President Vladimir Putin’s invasion of Ukraine.

Biden will make a three-stop trip to the Middle East in mid-July that includes a visit to Saudi Arabia, pushing energy policy into the spotlight as the U.S. and other countries face soaring fuel prices that are driving up inflation.

Biden has sought to play down any direct talks with Crown Prince Mohammed bin Salman, who U.S. intelligence officials implicated in the killing and dismembering of Washington Post journalist Jamal Khashoggi in the Saudi consulate in Istanbul in 2018.

Asked if he would ask the Saudi leaders to increase oil production, Biden replied, “No.” Instead, he would continue to make the case that all Gulf states should raise oil output, he said.

“I’ve indicated to them that I thought they should be increasing oil production generically, not to the Saudis, particularly,” Biden told reporters.

Biden also said the agenda includes much more than energy policy and stressed that the meetings will include leaders from many Gulf nations.

Biden will meet separately with King Salman and his team on the trip, U.S. officials have said, which will include the crown prince and other Saudi officials.

OPEC Plus —  a combination of the 13-member Organization of the Petroleum Exporting Countries and an informal group of non-OPEC members led by Russia — met virtually on June 30 and reaffirmed an earlier decision to add 648,000 barrels per day to oil markets in July and August. Most of the additional output is coming from Saudi Arabia and the United Arab Emirates.

Americans are paying an average $4.86 per gallon for gasoline, down slightly from the $4.94 they were paying a week ago, but still near the record highs reached earlier this year.